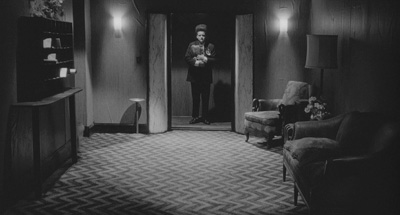 David Lynch makes documentaries of the human subconscious. He captures--in a deadpan, almost scientifically-objective way--the processes through which we assimilate and interpret machine-fed data, replicating in that sense the sort of Pop aesthetic of Warhol's ilk without the snarky sense of milk-fed superiority. Take the cultural cues in his work: the Rockwellian Americana he essays in Blue Velvet; the Bauhaus by way of Antoni Gaudi of Dune; or the late-Hitchcock identity puzzles he rejiggers in Lost Highway and Mulholland Drive--both commonly seen as satires of what they represent but more accurately described, perhaps, as simple, uncommented-upon representations of what a lower layer of consciousness might consider to be unadorned gospel. Call the best moments of his best films Expressionism of the Id. (Mulholland Drive could be Vertigo shot by Hitch's bile and libido, unchained and unembarrassed.) Lynch's pictures are the very opposite of pretentious: they're unguarded images projected directly from a place of null intentionality. If the aim of art is to touch the sublime, to strum the thread of the collective unconscious that binds us each to each, as it were, then Lynch becomes a figure like Rainer Maria Rilke or William Blake or Beethoven--or in filmic terms, like Luis Buñuel or Carl Theodor Dreyer or moments of Sergio Leone.

It seems romantic to discuss Lynch in this way (at the least, it seems to elevate the artist to deity), but a film like Eraserhead should be spoken of in terms of collective unease rather than as the pinhole of universal narrative confusion. It's impossible to "get" a film that's not directed at the part of the head that understands things in a logical context; this is a film that couldn't exist without other films, making it, like the fetal horror that comprises its moral compass, a product of impossible parentage, vulnerable to the most intimate--and futile--of investigations. You can take it apart, but you're not going to figure out where all that dread came from in its dissection. The "answer" to the picture is that it evokes a nightmare state and does so without either a hint of intentionality or, astonishingly, the use of broadly recognizable archetype. The film isn't a Jungian exercise, though it's presented in a visual language that would require a Jungian scholar to systemize. It uses a different language altogether, you could say, and it's a tongue from which an unexamined part in each of us is able to ken some measure of visceral--more to the point, sexual--meaning. The importance of Lynch as an artist is that he seldom tries to impose sense on his pictures, which is not to say that his films are surreal (they're as goofily, ominously straight as Andrew Wyeth or Grant Wood as they are surreal, after all). His decision to allow instinct full rein on his projects is the quality that makes something as apparently conventional as The Elephant Man take on the fuzzy weight of an unrelieved (and unrelievable) existential fog.

Eraserhead opens with the familiar--or, rather, the familiar after a fashion--with images of sticks, holes, wet, and sperm. Prefacing the film like the world's most literal strip of leader, sperm falls in the wet in the centre of a hole (the same hole that will be stepped in a few minutes later? Does the fetus at the middle of the picture get tracked home on the bottom of a shoe?). A glimpse of our hero Henry (Jack Nance), his mouth open to release said sperm like God and His word, engenders industrial landscapes positioned like monochrome Miro paintings. If I find myself referring to works and artists from other media whenever I talk about David Lynch, I think that speaks to a certain inarticulateness his work inspires, causing me to grasp at similar experiences from other parts of my makeup. It's just a step away from me trying to draft personal tragedy and triumph into the conversation. We see a photograph (a woman, Mary X (Charlotte Stewart), missing her head) pieced together in a nest and then the woman is made flesh next to an address (2416), the sum of which, à la Hitchcock's "Eve" numbers in North by Northwest, is thirteen. Fruitful to speculate that on one level, Eraserhead is about methods of procreation, whether they be the filmmaker and his film, the dreamer and the dreamed (as Adam dreams Eve to find her flesh), the bitch and her litter (insensate), the prostitute (transactional), the fetus (the Keatsian deflation horror of consummation), or anything else. It's the world seen through the mindless, turbid eye of a penis.

On another level, there's the idea that Eraserhead is a grand, meticulously metered comedy of manners that subverts conventions of social interaction by introducing, baldly, the subject of bodily humours in all their repellent, matter-of-fact glory. As is the film itself in many ways, the stink and wet of the body impolitic is absolutely frank and unapologetic. When the mother (Jeanne Bates) of Mary X--Henry's best shot at a mate and, we presume, the woman who bore their suspiciously calf-like child--makes a move on Henry by chewing on his neck, look at how Lynch frames the discovery sequence, with Mary X isolated by a curved pipe. It's a reconfiguring of the nuclear family dynamic emerging from the traditional courtship ritual, presented in a way that's not much different from a million other relationship comedies featuring a slovenly but well-meaning young man wooing the girl, meeting the parents, having the baby, waking up with it at night, not getting sex, and getting left. Eraserhead is The Graduate--except there's a stage behind the radiator, Katharine Ross turns out to be a bad mommy, and the baby is hideously deformed. I like the scene where Henry takes his infant's temperature, not because it's a strange thing to do with a sick baby, but because the image of this thing with a thermometer in its mouth is hilarious. Again, it's not surreal, exactly, because what else would you do with an ailing child? (The juxtaposition of images is not in itself absurd.) And yet there's a strong feeling of personal, existential crisis, because although the child is repulsive, it mewls like a baby and our instinct is to protect it. You feel for Henry's dilemma, and that's funny.

Appearing in 1977 but in the works on and off for five years, the picture fits with the paranoia films of that decade, too, as another detective story with a hero left with no answers and at the mercy of a vast machinery about which he knows less than he did when he started. More insidious than some of its contemporaries, however, Eraserhead agitates its audience into the same sort of doomed, Quixotic, Oedipal quest for answers as that of Night Moves' Harry Moseby, The Conversation's Harry Caul, and The Parallax View's Joe Frady. (It says something remarkable that the detective movie with the happiest ending of the seventies might be All the President's Men, a document of one of the headwaters of the many broken-down, appalled films of the decade's latter half.) Watching Eraserhead and its series of doors opening, curtains (legs, labias) parting, and slow demonstrations of that Lynchian hallmark of performances within performances (ultimate reminders of the power of images and of how the medium of film trumps disbelief), one finds oneself castrated along with Henry. The image of decapitation evocative always of being emasculated (with the further use of poor Henry's noggin being an instrument that children use to erase mistakes), there is the gathering sense throughout the picture and the experience of the same of gradual, inexorable diminishment into insignificance. A retreat into the lizard brain and a surrender to the nihilism of entropy.

The fallacy, as suggested by Lynch, is that audiences engage in a willing suspension: when art works, there's nothing voluntary about the engagement of the viewer. Eraserhead is a masterpiece of involuntary reactions within and without, the product of an artist at ease with the messages buried in the scattering of his entrails yet somehow able to equate a mushroom cloud with a tree growing from a bedside table with the haircut of his protagonist without a hint of self-consciousness. It's a product of the Jungian Shadow: neither bad nor good, just unexamined--and the discomfort we feel with the film indicates that the truths contained in Eraserhead, whatever they may be, are as surely true as they are unexamined.

THE DVD
Through Subversive Cinema, Absurda makes Eraserhead available for the first time outside of Lynch's website in a stunning 1.85:1 anamorphic widescreen transfer sourced from 2003's frame-by-frame restoration. Save for a few minutes now and again (mainly an exterior of a factory set) that exhibit the ravages of age and zero-budget production, the picture is breathtaking in its contrasts of lights and darks. It's clear to see the hand of the creator (well-established in a variety of media), giving credence to Blake's theory of "infernal method." Meanwhile, the DD 2.0 stereo audio is muddy and cantankerous, as intended. The root and supplemental menus feature a deleted scene from the film of Henry trying to free his pants cuff from the wire leash of a mummified cat carcass (it's beautiful, perversely)--you have to watch it for a while before you're allowed to select anything, and though you'd think that'd be maddening, it's a nice way to prepare for the picture. Also included is the feature-length "Stories" (85 mins.), which sees Lynch, propped up behind a microphone, spinning production myths in his peculiar Midwestern drawl in much the same way that Werner Herzog spins his with a Bavarian accent. I don't know how much of this to take seriously (such as when talk turns to his DP being the reincarnate of an ancient space pilot), but it's fun viewing. A forty-second trailer of flashes from the picture is almost as disquieting as the film itself and rounds out the keepcase presentation. Originally published: June 29, 2006.