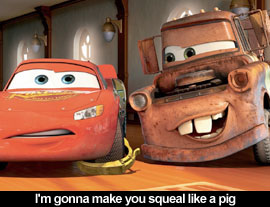 by Walter Chaw Soulless and anchorless, Pixar's Cars is the company's first all-around failure. It's got something to do with the lack of a human grounding: the only other time Pixar stumbled was with its similarly bleak A Bug's Life (that picture resorting, like Cars, to racial caricature as its primary tentpole), which is also the only other time the company has neglected to ground its story with homo sapien ballast. It's telling that a company pioneering machine-tooled animation so relies on that hint of humanity for its effectiveness; in its place, Cars resorts to cheap name-games (all the cities are car-parts except, dubiously, Los Angeles) as its primary gag and relies on a string of racing in-jokes (Darrell Cartrip, get it? Yeah, me neither) to lubricate its worn-down gears. It's the product of the "Larry the Cable Guy" school of redneck effacement tacked onto a tired redemption romantic comedy, even more tired fish-out-of-water malarkey, and finally an inexplicable blanket criticism of all things urban. Sub-vaudeville gags with weak payoffs and rudderless execution are the things one would rightly expect from a DreamWorks flick--pity that their strain of high-concept lack of inspiration seems to respect no host.

Horror movies do a lot with city folk getting stranded in the boonies, putting them at the mercy of mutant yokels bitter about their marginalization. Trace it back to Psycho, perhaps, and what happens to a nice momma's boy when the freeway bypasses his mom and pop. Thornier, the idea that a world existing entirely of cars (the cows are tractors) would inspire wonder and empathy in an audience of sentient beings is spectacularly misguided. But the real wonder of the bloated, meandering Cars is that in its tale of a self-obsessed jackass growing a heart way out there in the grassroots (but not without the help of a hot little Porsche, of course, thus fulfilling another DreamWorks/Disney dictum of the pretty mating only with the pretty), there's not one hint of the innovation and intelligence of Pixar's other films.

Lightning McQueen (voiced by Owen Wilson) is a hotshot NASCAR rookie, um, car, who hotdogs his way to a tie in an Aesop moment of hubris, necessitating a showdown with arch-nemesis Chick Hicks (Michael Keaton) and legend The King (Richard Petty). The opening race is beautifully rendered in a way that the processor of XBox 360 would have no trouble replicating, keynoted by a horrific crash made more horrific by the fact that these cars are living creatures. Pixar's corporate merging with Disney makes more sense now, recalling the way that salmon are treated in the Mouse House's otherwise completely-anthropomorphic Brother Bear: moments of callous stupidity, both, that speak to a wilful ignorance of how smart kids are.

McQueen, a self-obsessed speed-freak asshole a lot like namesake Steve McQueen (thus transforming the showdown with grizzled old Doc Hudson (Paul Newman) into a ghoulish '60s rematch between duelling idols McQueen and Newman), is stranded in a Podunk nowheresville that, we see in flashback, used to be a garish tourist trap before the department of transportation rendered it moot. Inhabited by the bitter (Doc), the winsome (Sally (Bonnie Hunt)), and the inbred (Mater (Larry the Cable Guy)), the town of Radiator Springs is likewise home to Tony Shalhoub, reprising his accent from "Wings" and Big Night as a tire-store owner with a pet thing from The Black Hole (Guido Quaroni) who will have an inevitable date with glory once McQueen fulfills the suffocating strictures of the underdog sports uplift conceit that is Cars' skeletal substructure.

What the film resembles most, in fact, is a fattened-up version of Duel, complete with the same castration themes, urban/rural divide, anthropomorphized vehicles, and dusty races along back roads and dirt tracks--but it lacks those critical elements of real genius in its implementation and real purpose in its form. Cars is an edgeless, pointless love letter to racing freaks and car geeks, the greatest offense of which should be that it's so dumbed-down and wafer-thin that it says a lot about what its creators think of their target audience. Why should the stupidest, most facile, least-risky film Pixar's ever made be the one directed at NASCAR fans and other red-staters? Maybe it's not the olive branch from Tinsel Town we thought it was, after all. Originally published: June 9, 2006.