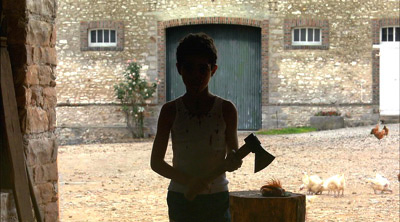 There's another moment, another glimmer of hope, at the very end of his new film Caché in which two of the picture's minor players are seen talking to one another in front of the protagonist's son's school--and this time Haneke does nothing to "rewind" the implicit optimism, letting it stand as what might be an example of an older filmmaker mellowing a little, having some trouble now catering to the intellectual demons he's set loose into the relentless outer dark. The follow-up to his just-awesome end-of-time Time of the Wolf, Caché finds Haneke in a reflective mood, examining--much like A History of Violence did for America's, well, history of violence--France's own dark human rights record (which seems prescient with a new round of massive race riots in Paris to end 2005) in regards to the Algerian massacres of 1961 and, reaching farther back, 1945.

Caché's existential thriller conceit is the same one that introduces David Lynch's Lost Highway: a videotape is left on the front steps of a bourgeois family's home, showing, essentially, that they're being watched by someone with ambiguous motives. It leads stuffy intellectual Georges (Daniel Auteuil), insulated in rooms full of books and the ghosts of cold non-interactions with his wife Anne (Juliette Binoche), to dig up a few personal skeletons. Of central concern is his treatment, as a child, of an Algerian boy named Majid (played as an older man by Maurice Bénichou in one of the best performances of last year)--an obvious nod to Haneke's inspiration for this film on what was essentially the thirty-fifth anniversary of the heavily-denied French gendarme's slaughtering of between 200-400 Algerian protestors, though easily taken as a more universal dybbuk of an unwillingness or inability to acknowledge that the costs of our collective past eventually, inevitably, come due. (The notion, to tiptoe around what I mean, that things never happen in a vacuum.) Although the theory of spontaneous generation was laid to rest around the end of 1700 by an Italian physician, it seems ever-current, ever-popular in the manipulation in the popular opinions concerning personal wars, for example--or, say, massive race riots ripping through the self-proclaimed beacon of human rights in the world. The idea is that these ideological maggots, apparently, magically materialize from whole cloth.

Caché is clinical. The videotapes keep coming, interrupting a self-congratulatory dinner party with images of Georges's mother's house, wrapped now in a child's drawing of someone bleeding from the mouth. Haneke, as is often his tactic, shows the butchering of an animal as a central metaphor for moral decay (the bleeding of a horse in Time of the Wolf, in particular, leaves scars), here using the beheading of a rooster as the kind of moral stain that infects the soul of modern, industrialized man in the suggestion that there's something lost in the remote engagement of murder--the great malignancy of modern warfare as death dealt from continents away rather at the end of a sword or an arrow. It may seem a specious connection, but it follows in Caché as Georges slowly begins to "deserve" his torment thanks to his escalating hostility towards a target innocent of any initial salvo. The difficulty of the film is in trying to find a character on which to pin the hostilities--something that, should it exist, would defeat the idea of implacability that Haneke fosters when the solution appears to be in line with a read that the bad guy is Haneke (armed, after all, with a camera and omniscience) and by extension from Haneke, we the audience. Our inability to divine the difference throughout between what's "current" in the picture and what's a videotape is central to our culpability in the voyeurism visited upon Georges and Anne.

Caché is a political film, but it's also about what kind of responsibility Haneke has to his characters and what kind of crime we're committing in watching a film. While comparisons to Hitchcock become valid in this light, Caché plays for me like a philosophical exercise in deconstruction that pulls up just short when it could offer a killing stroke. The credits sequence and the secrets it holds suggest that there's hope yet in the curiosity of the young (how does Haneke become inspired by the Algerian story if not for the attentions of new generations of historians?)--and that there is innate in the human animal a need for understanding of where we've come from to bring us to the sorry place in which we now reside. I don't know if Haneke is saying that it'll save us (it hasn't yet) or even that it's enough in time, but I believe that Caché is the filmmaker allowing that the quality of pointed inquiry is not completely in vain, whatever ugliness scatters before the shining of that light. Originally published: December 23, 2005.

THE DVD
by Bill Chambers Sony shepherds Caché to DVD in a 1.78:1 anamorphic widescreen transfer. The film was shot in HD and there appears to be some controversy surrounding the amount of edge-enhancement present in the otherwise brilliant image. To my eyes, the light but consistent ringing looks like an unavoidable by-product of downconversion--a compression artifact--as opposed to artificial sharpening. The accompanying Dolby Digital 5.0 audio forgoes a dedicated LFE channel, not that it makes a difference: the only thing on the soundtrack besides dialogue is room tone, though voices occasionally travel across the discretes. Extras include Serge Toubiana's "Interview with Michael Haneke" (25 mins.) and Yves Montmayeur's complementary making-of featurette "Hidden Side" (37 mins.); on their own, the former might come off like a puff piece and the latter like a hatchet job, but together they present a well-rounded view of Haneke (who resembles a hippie Walter Murch) as both a control freak and someone whose penchant for ambiguity stems from a genuine reluctance to presume omniscience.

Toubiana brings out a side of the director so congenial that when Haneke observes, "In an American film, it would be exactly that: there's an exterior threat, and the threatened couple is reunited," there isn't a tinge of European superciliousness in his voice, just proof that he has indeed considered a multitude of scenarios for what is in his words an archetypal premise. (It helps that he seems to see anti-intellectualism--"A lot of people who go to the cinema don't want this sort of thing," he says of the film's loose ends--as a global problem.) Montmayeur's fly-on-the-wall piece has a bit of fun mimicking Caché's perceptual rug-pulling but mostly resonates for its unobstructed view of the temperamental auteur at work, though it ends with long-time producer Margareth Menegoz praising Haneke's uncompromising approach. (She's the rare producer who'd rather see it done right than right now.) And yes, the final shot of the film is extensively discussed, although you're still left to draw your own conclusions. Menu-based trailers for The White Countess, Breakfast on Pluto, Friends with Money, The Three Burials of Melquiades Estrada, Joyeux Noël, Don't Come Knocking, Capote, Why We Fight, Marilyn Hotchkiss Ballroom Dancing & Charm School, and Cirque de Soleil: Lovesick round out the disc. Originally published: June 26, 2006.