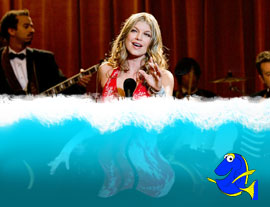 by Walter Chaw Sort of like Ghost Ship without the gore (and it promptly loses the points it earns for being sans Julianna Marguiles by featuring Kevin Dillon), Wolfgang Petersen's soggy underwater soaper Poseidon starts with a theoretically exciting (but just unintentionally hilarious) set-piece and limps the rest of the way on the standard old slogging-through-wet-hallways bullroar that may be the very definition of "un-exciting." Kurt Russell is Robert, an ex-fireman/ex-New York mayor who appears to have a gambling problem and a contentious relationship with his daughter Jennifer (Emmy Rossum), which will of course be resolved, Mark Twain-style, by a late-in-the-show heroic action. Josh Lucas is Dylan, the rogue ex-Navy man with a plan; Jimmy Bennett is the buck-toothed little idiot who wanders off a lot (and Jacinda Barrett is his long-suffering mom, Maggie); Richard Dreyfuss plays Richard, a suicidal queen planning on leaving his pals with a hefty bill by leaping from the mighty Poseidon luxury liner's galleria after dinner; and all people of colour are meatbags to be fed to the mill whenever someone needs an example of what could happen to the rich whiteys not unfortunate enough to be in steerage.

I like when Jennifer's boyfriend Christian (Mike Vogel) sends stowaway Elena (Mia Maestro) off to get electrocuted early on--just as I enjoyed Richard kicking Elena's boyfriend off his foot and onto a bed of spikes inexplicably sprouting from the top of an elevator shaft. It's not a good thing to be reminded of Sylvester Stallone's appalling Daylight, but Poseidon does so often with its story of insufferable wankers negotiating their way through a flooded obstacle course, following an inarticulate alpha male (Dylan) and suffering predictable--and highly-melodramatic--fatalities along the way. Poseidon ups the ante by including a couple of vocal performances from the Black-Eyed Peas' torso Fergie that make the audience start rooting for the "rogue wave" that eventually capsizes the titular tub to hurry up and sink the damned thing already. Said terrible-CGI event occurs at around the fifteen-minute mark--which is sort of amazing both for its ridiculousness and because I'd already checked my watch about a dozen times by then. The only time the film is funnier is when Lucky Larry the Lounge Lizard (Dillon) gets hit by a train. Don't ask.

Mark "The Cell" Protosevich's screenplay is unspeakably terrible, matched step-for-step by Petersen's increasing inability to shoot anything in a way that generates interest, energy, or heat, much less sense. Take the example of Richard's ferocious Mexi-cide (or is it Blue Collar-cide? You de-cide), and of how the script tickles around the idea that since he does find out that it's Elena's boyfriend he offed to save his own life, in later offering her his foot to grab, it's probably meant as a means towards personal redemption (if mainly reminding me of the identical race/power dynamic in Dreyfuss's shrimping scene from Down and Out in Beverly Hills). But the narrative is such a stripped-down, anaemic thing that even this eye-rolling pass at character development is sad and withered, leaving only the ugly after-image that on the hierarchy of Poseidon's moral compass, rich white gays rank just above poor Argentinean beauties.

It's a feckless parsing of rank stereotypes that ultimately allows the filmmakers to skip past all that messy plot stuff, making way for the bad action scenes, the thundering score, and the worse special effects. Poseidon is a waste of life, a waste of cash, and a step backwards somehow from the original waste of life upon which this is based. Russell steps into Shelly Winters's shoes here, something the film seems to make fun of when someone asks Russell's character how he managed to squeeze through a tight spot; meanwhile, emotionless cipher Lucas earns his action hero stripes by setting his jaw and growling his lines. Take this with M:I:III as examples of why people stay home in droves. It's not the experience, it's the films--and Poseidon is as dumb, inept, and boring as they come. Originally published: May 12, 2006.