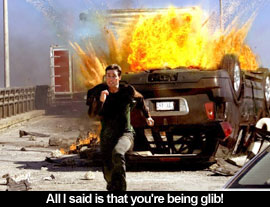 by Walter Chaw SPOILER WARNING IN EFFECT. That classic combination of a film that doesn't make any sense with one that doesn't inspire anyone to invest an iota of emotion in giving a crap, J.J. Abrams's Mission: Impossible III (hereafter M:i:III) isn't convoluted like the first two instalments so much as it's just incoherent and loud. It's the camera-in-a blender-school of action filmmaking: There's so little understanding of spatial relationships that the whole thing plays like that Naked Gun gag where the gunfight is taking place between two people within arm's reach of one another. An extended heist sequence set in Vatican City, for instance, features the four members of IMF ("Impossible Mission Force") hotshot Ethan Hunt's (Tom Cruise) team (Ving Rhames, Jonathan Rhys Meyers, and the requisite hot Asian chick (Maggie Q)) running around in completely anonymous locations, sticking doodads to walls, and confirming to one another that they're "ready" and "in place." But without knowledge of their plan, their location (respective to one another and their goal, whatever that might be), their peril, or the stakes, you're left with four people doing something for some reason, necessitating our willingness to play along with the charade that we know who these people are, what their goal is, and why we should care. Consider a helicopter chase through a wind farm, too, and the many lovely visuals that such an enticing premise suggests--then look to the end-product, which is a lot of tight shots of helicopters in the middle of the night, parts of giant windmills, a bad soundtrack, and multiple decibel screaming about "incoming" and "they've got a lock on us." Who does? And where are they going on that wind farm? And why does the promise of an instrument-factory explosion induce yawns?

They've taken the On Her Majesty's Secret Service route this time around, with Ethan marrying poor screamer/hostage Jules (a thanklessly cast Michelle Monaghan), who, in the prologue, appears to be shot in the head by evil something or other Owen Davian (Philip Seymour Hoffman, looking more than a little like a wax effigy of himself). Davian wants a MacGuffin from Ethan and his mates and is willing to do a little over-acting to get it, causing much globe-trotting to exotic (and curiously deserted) locales where Ethan can do wind sprints while his buddies talk to each other on headsets and stare at computer monitors. A Q-figure emerges in British comedian Simon Pegg's lab-bound Benji while Laurence Fishburne plays Morpheus again and Billy Crudup is Ethan's immediate, ineffectual successor Musgrave. If nothing else, maybe you'll be pleased to see Keri "Felicity" Russell have a bomb go off inside her head in one of two moments in the film where someone you'd like to see cranially-defibrillated actually is cranially-defibrillated.

To say there isn't a hint of character and/or plot development in M:i:III is to imply that some was attempted and that the attempt failed. From the looks of things the picture was always simply meant to be a series of spectacular action set-pieces--and in the staging of said set-pieces, television director Abrams forgot that he had the option of shooting in something other than extreme close-up or respectful medium. There's a nifty-seeming stunt where Cruise slides down the side of a building, yet the way it's shot suggests that he's either going down vertically or, alternately, horizontally, and without knowledge of the particulars (how high? how dangerous?), all you have is a stunt man sliding across a blue screen: something you could simulate by throwing an action figure across a slip-and-slide. More, if you don't care who Ethan is (and are acutely aware that he's indestructible, anyway), and if you don't know what he's doing, for whom he's doing it, and what the time frame of his actions are (though he's given forty-eight hours to accomplish a mission, we don't get back to the countdown until there are two minutes left), then how could you possibly care about anything that happens as a result of his derring-do?

Perhaps all would be forgiven if M:i:III were competently-directed (while M:I-2 is one of the stupidest films ever made, as John Woo is one of the best action directors of the past twenty-five years, damn if it's not beautiful, coherent, auteurist stupidity), but it's a glassy-eyed, dead thing complete with superfluous flashbacks to events we don't care about involving characters we don't recognize, an interminable party sequence in which Cruise trots out his smile like it was a weathered, beaten-down trophy wife, and a smug, self-congratulatory conclusion full of high-fives, victory arms, and shit-eating grins. What they believe they've accomplished is anyone's guess (seriously: anyone have a guess?)--all I know is that M:i:III made me want to take a nap in almost the same way that Episode III bored me to tears. Basic math to say that lots and lots of strobe-lit business multiplied by nothing is still nothing, as well as that the only thing more boring than nothing happening is a lot of nothings happening. Let's see if Casino Royale can do any better. Originally published: May 5, 2006.