*½/**** Image B Sound A- Extras B
screenplay by Hayao Miyazaki (American adaptation by Cindy Davis Hewitt & Donald H. Hewitt), based on the novel by Diana Wynne Jones
directed by Hayao Miyazaki 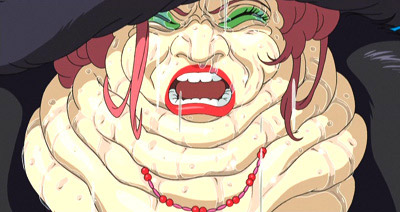 by Walter Chaw I've never liked it much when the Japanese are drawn to Victoriana, finding parallels as they sometimes seem to between that reserved, sexually-repressive culture and their own, because it most often results in garbage like Katsuhiro Ôtomo's exhausting Steamboy and now master Hayao Miyazaki's disappointing Howl's Moving Castle. Slow, not terribly interested in lore or internal logic, and fatally hamstrung by the choice of actors like Billy Crystal and a zombified Emily Mortimer to voice its American dub, it's a regression for Miyazaki from his last two films (Princess Mononoke and Spirited Away) in almost every sense, starting with his decision to have a lonely young woman as the central character in place of the prepubescent little girls front and centre in most of his masterpieces (the last two films, Kiki's Delivery Service, Nausicaä of the Valley of the Wind, and My Neighbor Totoro) and ending with a gross simplification of his usually complex themes of confidence and actualization into a colourless, flavourless drone about the hard-to-dispute badness of war.

Exactly as tedious as Steamboy, then, and covering exactly the same ground, Howl's Moving Castle shares with Ôtomo's film, too, a giant steam-powered ball as its central image, encapsulating a vision of Victorian England in a Frankenstein's yin/yang clattering along inexorably like the Industrial Revolution while gorgeous impressionistic watercolour towns are polluted by coal smoke from a fleet of trains burning through the forests at night. Pretty-boy wizard Howl (voiced by Christian Bale, who is not, as it happens, known for his vocal expressiveness) lives in the film's titular ball--itself perched atop four chicken legs like a mechanized extrapolation of the Russian Baba Yaga myth (married to Harlan Ellison's "Shoppe Keeper" short story), eternally wandering a mist-shrouded wasteland as silly townsfolk speculate that he's out to eat the hearts of pretty women. Hatmaker Sophie (Emily Mortimer as a young woman, Jean Simmons as the crone version) remarks sardonically that Howl's predilection for fine young things leaves her, a plain Jane, safe from his attentions, yet Howl saves her early on from the unwelcome lascivious attentions of a pair of leering Bobbies. All the peripheral men in the film are sexually aggressive wolves or pre-sexual cubs (a witch's retinue is composed entirely of fey little boys) and all the peripheral women are treacherous bimbos. But there're no sexual politics in the film, not even in the multiple suggestions that the main character is gay. (Sophie notes that Howl in disguise is most likely one of the above-mentioned bimbos.) It's the white elephant in a room decorated with them.

And that's the problem with Howl's Moving Castle: it's a nonsensical film that demands its audience impose sense on it. After Sophie is arbitrarily turned into a 90-year-old woman by the arbitrary Witch of the Wastes (Lauren Bacall, typecast), she spends the rest of her time alternating personas with no explanation as to what we perceive, what Sophie perceives, and what her cohorts perceive. Is her change meant to represent the Miyazakian theme of female actualization? Or is there some other lore-embedded explanation that would do a better job of grounding the film in its own mythology? Worse is the recurring figure of a scarecrow (and the overtures to The Wizard of Oz are as many as they are superficial) that turns out to be a missing prince from the next kingdom over--the revelation of which isn't a spoiler in any way because not only were we not told there's a next kingdom over, we also weren't aware that a prince was missing. Meanwhile, there's a war going on, complete with giant bio-mechanical bombers and fire-lit horizons--a war in which Howl refuses to participate even though he leaves his castle every night to, well, participate in it. The character isn't conflicted so much as the narrative is confused--it takes almost the whole of the film to identify the war zone as a contemporary plane rather than some kind of cautionary vision of the future or another dimension. The picture's beautiful, no question, and I do wonder if there's something irretrievably lost in the translation (the film grossed over $200 million dollars in tiny Japan last year where it was, admittedly, Billy Crystal-free). In this incarnation, however, Howl's Moving Castle is easily the biggest let-down of the year so far. Originally published: June 17, 2005.

THE DVD
by Bill Chambers Disney presents Howl's Moving Castle on DVD in a 1.88:1 anamorphic widescreen transfer. Tech-savvy anime buffs have lamented this presentation ever since its release, as the Mouse House took one step forward and one step back in dispensing with the controversial windowboxing of its Japanese counterpart while simultaneously introducing edge-enhancement into an otherwise-immaculate image. Because Hayao Miyazaki's animation consists of line drawings, this isn't just noticeable--it's completely redundant: the illusion of sharpness comes built-in. The accompanying Dolby Digital 5.1 audio, in similarly-mixed English and Japanese flavours, is more aggressive/expansive than we've been conditioned to expect from Ghibli titles, particularly whenever the titular castle is in transport.

The characteristically U.S.-skewing extras include one of the sleeker entries in the "Behind the Microphone" sweepstakes (9 mins.); a 7-minute "Interview with Pete Docter" conducted for Japanese television (the questions are asked in Japanese, but Docter helpfully paraphrases them at the start of his answers) wherein the director of the Stateside dub avows a preference for watching foreign films in their native tongue and touches on the interesting dilemma of the effeminate wizard archetype Howl represents having no correlative in American culture; and "Hello Mr. Lasseter: Hayao Miyazaki Visits Pixar" (16 mins.), in which Miyazaki pays a surprise visit to his would-be protégé at Lasseter's workplace, where he gifts him with a coveted Cat-bus installation and accompanies him to the in-house premiere of the English-language Howl's Moving Castle. Though a heart-warming piece, this final segment is ultimately hamstrung by the fact that we not only witness these events unfold but also have to listen to Lasseter recap them twice, first for Pixar staffers at the screening, then for a Japanese interviewer. A 12-minute block of Howl's Moving Castle TV spots and trailers plus sneak peeks at Disney's other Studio Ghibli acquisitions, The Little Mermaid, Cars, Chicken Little, The Chronicles of Narnia: The Lion, the Witch and the Wardrobe, and Airbuddies round out the first platter of this 2-disc set. The second DVD contains the de rigueur option to view Howl's Moving Castle in storyboard form. Originally published: April 25, 2006.

We are told early on there's a neighboring kingdom with a missing prince; that's the reason for the war. Granted, the explanation is blink-and-you-missed-it, and not much else in the movie makes sense (an issue of editing and translation?) but for trippy imagery, this is top shelf Miyazaki. Howl isn't gay so much as based on Michael Jackson, but draw your conclusions there.