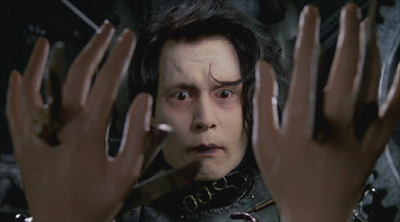 by Walter Chaw Edward (Johnny Depp), all of Edward Gorey blacks and angles, is the product of a variation on the Frankenstein myth, his mad scientist creator (Vincent Price) dying before he can replace Edward's scissor-hands with wax appendages. Marooned at a child's emotional development, he's thus unburdened by the sort of rage for usurpation of Mary Shelly's creation; when he kills his "father" by neither accident nor design, find in Edward an adolescent's existential angst in an Oedipal split interrupted at the moment he was to be given the instruments of his ascension into "humanity" by his creator. The irony of his condition is expressed by the Stan Winston-designed shears with which he's burdened, lost on the edges of civilization (Tim Burton's twisted view of suburbia), cutting out articles from scavenged magazines and junk mail flyers and arranging them in a collage that includes a story about a boy without eyes, an ad for the kind of prefab-furniture favoured by Burton's suburbanites, and a Madonna-and-child. Our introduction to Edward, facilitated by chirpy Avon sales lady and housewife Peg (Dianne Wiest), is the film's signature set-piece, allowing as it does this twisted, tragic figure to emerge as both effrontery and holy effigy. For Burton, Edward glows with the romance of an eternal child--Peter Pan in love with a memory of Wendy for eternity, adrift with the Lost Boys and working with ice.

The style of presentation goes from gothic to surreal, establishing Burton as the carrier of not only the German Expressionist's torch, but also Luis Buñuel's astringent, absurd satires--and pegging the director, too, as having paved the way for the snarky pomo tableaux of Wes Anderson and, to a lesser extent, Alexander Payne. Yet it might be going too far to call Burton a satirist: It's my suspicion that his aim isn't to lampoon the excesses and hypocrisies of the Bourgeoisie, but rather to paint a symbolist picture, if you will, of what happens to a child when he sacrifices his childishness for adulthood. Consider the ways Burton deviates from the source in his Charlie and the Chocolate Factory, particularly in the divorce of Wonka from an orthodontist father. Gadget-fascinated, Burton's men-children protagonists are in a constant state of revolt from--and flirtation with--society at large, and Edward Scissorhands mines that tension in various fish-out-of-water gags of the outcast trying to assimilate (see it also in Beetlejuice's mimicry of Adam, the pre-teen heroes of Mars Attacks!, and even Ed Bloom's message of whimsy from Big Fish)--light sequences given weight by Depp's astonishing performance. Burton's not making a point about suburbanites with his gallery of grotesques--he's making one about the inadvisability of growing up. His movies are fairytales for retarding evolution.

Peg's daughter Kim (Winona Ryder in Burton blonde) becomes Edward's "Wendy," the girl for whom Edward agrees to break into a safe (one of his "fingers" serves as a handy lock-pick) owned by the father of her evil boyfriend, Jim (Anthony Michael Hall). Hall is the prototypical "nerd" hero from several Brat-Pack movies, of course, and his appearance here as the jock bully came as something of a shock to members of my generation. I believe that's by design: in Edward Scissorhands, Jim functions as Edward's unpleasant reminder that with adolescence comes violence and sexual jealousy; in the most literal way, possible, he enlists Edward in a series of deceptions (the final one being his own exile), representing with his own aggression and bile one possible eventuality for mild Edward if left too long in the world. Many have noted the barbs aimed at all the monstrous intolerance at a time set aside for Christian grace (the picture takes place over the Christmas holidays in a snow-less 'burb), all of it embodied in the Born Again wacko Esmeralda (O-Lan Jones)--and while there's certainly validity to that observation, I think Burton has a specific axe to grind.

It's the key to how Burton saw himself as the outsider, the iconoclast artist best served free of the pressures of dopey mass culture and crass commercialism, as evidenced in the Burton-produced The Nightmare Before Christmas (wherein his outsider hero Jack attempts, in a heartfelt way, to hijack Christmas) and various other instances throughout his work in which he betrays himself through his bullied protagonists as angry about his treatment up to now. Though Edward Scissorhands is a brilliant fable of adolescence because of it, that defensiveness also straitjackets the piece into standard motions and repetitive gestures. If not for Depp (and Price in a too-small cameo), it would be just another of Burton's curiously dated, brightly coloured confections--but with him, Edward Scissorhands is a minor cult classic about a thing with the heart of a cookie who turns out to be the Emperor of Ice Cream.

THE DVD
I'm gonna hazard a guess that Fox's Anniversary Edition DVD reissue of Edward Scissorhands has a whole lot less to do with celebrating the film's 15th birthday than it does with capitalizing on Burton's recent renaissance at the multiplex. A literal repackaging of the 2000 release, the disc doesn't hold up all that well today. In his then-novel feature-length commentary, Burton intersperses long stretches of silence with casting secrets and fairly trenchant observations about his process. The highlight, though, arrives in the form of three extended tributes to the late Price, an obvious influence on Burton; I was sincerely moved by Burton's anecdote that he had sent his short Vincent to Mr. Price and received, in return, a gracious letter that Burton says was a watershed moment in his young career. "For someone you idolize to be so nice..." Danny Elfman speaks over an isolated score track in a second yak-track, beginning with the second chapter and interjecting sporadically throughout the course of the picture. It's informative after a fashion, I guess, but better would've been an extended, isolated selection that skips over the dead and/or redundant spots where Elfman keeps silent and the film's soundtrack is likewise muted. Who would listen to this?

The 1.80 anamorphic widescreen transfer looks remarkably fresh, with Burton's deep blues in the gothic shots and bright primaries in the suburban scenes reproduced with commensurate fidelity and a lack of any notable grain or, really, any kind of smearing or blooming. It's beautiful, especially during the climax--you can see every shadow of every wrinkle in Ryder's old lady fright makeup. A DD 4.0 discrete audio mix shows a great deal of range, albeit mainly across the front channels; it's not showy, but it's a little better than the 2.0 alternative, which sounds similar but doesn't have the same dynamic range. (Worth noting that Edward Scissorhands was part of an elite crop of proto-blockbusters screened at select venues in CDS, a precursor to DTS; it's one of the few CDS titles not mastered in 5.1 for DVD.) Meanwhile, "Soundbites" (8 in total, 1-2 minutes apiece), on-set blurbs from the principals (Depp, Ryder, Wiest, Burton, Caroline Thompson, Alan Arkin, Price, Elfman), share space with a vintage featurette (5 mins.) that opens with a random crowd sampling of people wondering what an "Edward Scissorhands" could possibly be, only pouring fuel on the "uh oh" fire. Nothing to see here, move along. Two trailers, one TV spot, and two Spanish TV spots round out the disc, with 6 pieces of "Concept Art" and an ancient Fox DVD reel playing upon insertion. The tin shroud it comes in contains the DVD plus six 4"x2" "collectible movie stills" shoehorned into a flimsy cardboard envelope. Originally published: April 11, 2006.