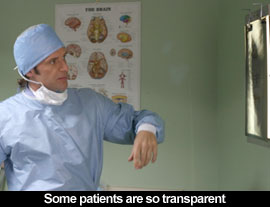 by Travis Mackenzie Hoover This site's editor Bill and I were on the phone one night, and we came up with a pleasant dream: What if a movie's stereotypical gay character--the one who gets all the bitchy repartee--actually wasn't funny? Be careful what you wish for: Adam & Steve is all stereotypes, all the time, and none of them are remotely funny. Only not by design, like in our fantasy--it's meant to be hilarious, meaning that you die of embarrassment on behalf of everyone involved. Although the film is supposed to be about a gay romance, its real theme is failure, and it's so terrified to seem like anything less than an outrageous good time that it tries too hard. (That the film's lone comedienne generally performs to crickets pretty much sums up the self-flagellant tone of the whole enterprise.) Hostile, ugly, and generally unpleasant to endure, it engenders fear intense enough to snuff out whatever lightness it might have had.

The film starts off badly with harsh, garish colours and the wit to match. It's 1987 at New York's Danceteria club, and goth Adam (writer-director Craig Chester) wanders in with fat friend Rhonda (Parker Posey) so that the former can gaze upon hot dancer Steve (Malcolm Gets); the evening ends with Adam hooked on coke as Steve takes a liquid dump in his apartment. Flash forward 17 years and Adam is a lonely ornithologist with self-deprecating tendencies and Steve is a psychiatrist with promiscuous ones. They meet again, fall in love, and have altercations with a jerk from Jersey who throws bottles at them--but everything is fine until Steve realizes their old connection and stops the relationship out of shame. Not really the behaviour of someone in love, that, apparently, is how it is in gay Manhattan.

Like I say, the film frets and trembles over failure. The participants are to a one arrested adolescents: not in the sense that they're irresponsible but in the sense that they can never move on. Everybody's hung up on what happened in high school, with Rhonda still cracking fat jokes even though she's now noticeably slim and Steve's straight roommate Michael (Chris Kattan) still acting like the hilarious pothead well past the shtick's sell-by date. This would be a swell springboard to comedy had it been a satire, but Adam & Steve is a self-abusive jamboree that only evasively aims barbs at itself. Though the film dishes out happy endings and emotional progress as if in a charitable mood, the preceding cloud of gloom is impossible to dispel--and it makes for a highly uncomfortable, not-at-all-funny viewing.

Of course, the point of this wealth of self-deprecation is to reduce things to a manageable nothing, and in turn it reduces everyone in its path to a day-glo stereotype with a trait pinned to its outfit. Had a straight director run through the gay landscape with Chester's glib shorthand, he'd be quite justifiably attacked for his insensitivity--but since our auteur is looking for no emotional connection, the glosses on gym bunnies, promiscuity, and bashing are suitably numb. Or, rather, they would be were the issues they raise not so tender, if not serious: the running gag with the Jersey thug is more horrifying than it is amusing, all the more so for the casualness of its employment. Ranting aside, the more damaging part is to the core of seriousness that love is possible and the pain can be dispelled. While the movie rides to a happy conclusion, what precedes it calls its bluff--it's a film that can't commit and pushes you away when you try to engage it. Adam & Steve isn't so much about a romance with a shrink as it is a plea for a referral. Originally published: April 5, 2006.