THE SQUID AND THE WHALE
****/**** Image B Sound A- Extras A
starring Laura Linney, Jeff Daniels, Jesse Eisenberg, Owen Kline
written and directed by Noah Baumbach

by Walter Chaw The title refers to a New York Museum of Natural History diorama called "Clash of the Titans" that proposes what a tussle between a sperm whale and a giant squid would look like--and it functions as the final, stirring tableaux of a 16mm film self-consciously shot in the manner of early Jim Jarmusch or Spike Lee joints. But The Squid and the Whale, Noah Baumbach's fourth film as writer-director, has inspired more conversation about the degree to which it does or does not tell the story of his own childhood--more specifically, the divorce of his parents, novelist Jonathan Baumbach and former VILLAGE VOICE film critic Georgia Brown--than about the self-reflexive canniness of the filmmaking itself.

It's a peculiar hook that finds most explanations of the title trying to establish one of the parents of the piece as the mammal and the other as the mollusk when the better truth is that both within the context of the film and without, the tableaux serves as a commentary on the frightening amount of repression and misinformation that provides the gist of any of our childhood memories (and all of our conclusions about the same). I don't believe that we ever really remember what we think we remember (just biologically-speaking, we're not doing any of the remembering with the same equipment) in all its nuances, contexts, and subtleties--that, like our memories of film, we bring to the past a new case of filters and lenses each time we revisit it. When The Squid and the Whale comes at last to a scene of a child regarding an object of repressed fear with frank wonder, rather than taking the easy analytical road by speaking of the phallic whale vs. the devouring squid, I think it's closer to the mark to see Baumbach himself gazing up at his film and wondering how it is that parts of his childhood could look so mundane freed from his skull.

Bernard (Jeff Daniels) was once a great writer and his wife Joan (Laura Linney) appears to be picking up the torch. As this is one of many sore points between them, they separate, with Bernard moving five subway stops away and the two sharing joint custody of their two sons: high-school age Walt (Jesse Eisenberg) and younger brother Frank (Owen Kline). Bernard is a spendthrift and a snob and bitter that his better days in the bask of the literati may have been parlayed into an eternity of teaching writer's workshops at community colleges and having joyless flings with bright-eyed students like Anna Paquin's Lili. He's obsessed with the trivial errata orbiting tennis and has passed on to Walt a strange, surface appreciation for people like Vitas Gerulitus, along with the kind of intellectual's self-esteem that's dangerously tangled up in any kind of reassuringly virile pursuit. It's tempting to offer pop psychoanalysis as a cure-all to the picture, but it's in the details that The Squid and the Whale discovers its footing--and in the fact that it doesn't pull any punches in its gory tale of the toll that divorce takes on the maturation of young egos.

The Squid and the Whale is a scabrous ode to the unmanageable muddle of interpersonal relationships: the idea that intentions good or bad only ever lead to new knots of unmanageable muddles--that intention merely lends tragedy and irony to the catastrophes of the every day. Baumbach's screenplay is lean and uncompromising. It's funny and mordant but it never feels condescending, a consistent respect for its characters and its audience the vital element that separates it from even the best of producer Wes Anderson's oeuvre. Even so, The Squid and the Whale depends on its performances. To that end: Daniels is brilliant, as he's inclined to be when given the chance; Linney quietly stuns by doing more than meets the eye, as she is wont to do; and Eisenberg's nervous creepiness is a boon to another role of need much like his questing teen in Roger Dodger. But the star of the show might be little Owen Kline (son of Kevin Kline and Phoebe Cates), saddled with what is possibly the toughest role and carrying it off without a hint of self-consciousness or twee, cutesy irony. Without a centerpiece moment for his character to define itself, Kline is left to listen to Tangerine Dream's brilliant Risky Business soundtrack while drinking whiskey and staring at himself in the mirror; his decline is internalized, in other words, and painful. If there's a real avatar for the image of titans wrestling in the unexamined deep, it's there in Kline's sad, glassy, slightly-offset eyes.

Would that the same depths could be plumbed from Nicolas Cage's sad, glassy, slightly-offset eyes in Gore Verbinski's facile reach for mainstream subversion, The Weather Man. In fact, there doesn't seem to be anything in there other than an actor known for his quirks coasting on his now-familiar anachronistic persona. It's a film that wants to be the middlebrow version of a Todd Solondz picture, meaning that it's going to kick over all manner of seething social ant piles but turn away at critical junctures and ultimately reassure by leaving its anti-hero paterfamilias sadder, wiser, and with a 1.2 million-dollar salary with which to staunch his psychic wounds. It's a film without consequences, meaning that if it broaches unpleasant topics, it's doing so to exploit them for whatever seriousness the topics can confer just by their association.

Take a subplot involving Chicago weatherman Dave Spritz's (Cage) wayward teenage son Mike (Nicholas Hoult), who's involved, as the film begins, in a drug rehabilitation program with creepy counsellor Don (Gil Bellows). Clearly a pederast, Don has Mike remove his shirt for an impromptu photo session, buys the kid clothes, and takes him on "dates" to the movies--all of it presented in a way that allows the audience a queasy superiority and, perversely, comfort. And sure enough, when Don tries to give Mike a blowjob (which is treated like a minor joke), it happens off-screen and is resolved by Dave beating the holy hell out of Don. As his boy sits there eating a corndog afterwards, Dave is led to believe that Mike might be a fag after all. What homosexuality has to do with being victimized by a child molester is something the folks chortling at Dave's long double-take at his boy devouring a wiener on a stick need to figure out for themselves. To me, it's but another example of The Weather Man shouting "cunt" in polite company and then handing out ten-dollar bills.

In a real way, with whole plotlines in common, Verbinski's film is the crappy, mainstream version of Baumbach's picture. But where The Squid and the Whale is embarrassed about its bald/canny references to The Mother and the Whore, The Wild Child, and Saul Bellow's The Victim, The Weather Man goes to extraordinary pains to pummel two metaphors nearly to death to apply one (the unpredictability of the weather ("It's wind, damnit!")) to Dave's angst and the other (archery) to his eventual inner peace. Cage's laconic voiceover work (he has two speeds, laconic and manic) is over-writing at its most obvious and patronizing: nothing goes uncommented-upon and so this picture about subterranean discomfort has no subtext at all. Dreaming of a job as Al Roker on a "Today Show" manqué, Dave finds his life complicated by his pursuit to win back his brittle ballbreaker of an ex, Noreen (brittle ballbreaker of an actress Hope Davis), to deal with the looming death of his father, author Robert (Michael Caine, doing The Cider House Rules again--and why not?), to reconnect with Mike, and to rescue his fat, possibly retarded daughter Shelly (Gemmenne de la Pena) from her schoolyard nickname of "camel toe." (Like the "problem of Maria" in James L. Brooks's disaster Spanglish, the solution to a little chubby girl's ills is a shopping trip. Something that makes sense, I guess, in our extreme makeover society.) Aspiring to be an incisive drama for adults, The Weather Man succeeds as an emotionally cheap, sometimes even puerile, geek show with great production values. Originally published: October 28, 2005. 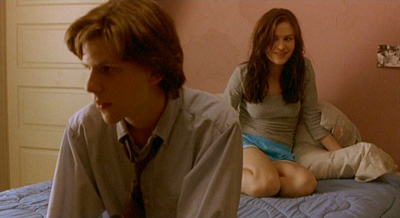 THE DVD - THE SQUID AND THE WHALE
by Bill Chambers Sony presents The Squid and the Whale on DVD in a Criterion-esque Special Edition. In fact, from the menu doodles to the inclusion of a liner-notes essay and indexed commentary track, the package screams Wes Anderson-envy. First things first: the film itself is presented in a 1.84:1 anamorphic widescreen transfer that wears its 16mm origins on its sleeve. Grainy, coppery, and exceedingly dim, it brings to mind a VHS rental copy of Hannah and Her Sisters, which is both fitting and aggravating: Sure, it complements the film's retro setting, but I also know from the Mean Creek DVD that it didn't have to look this crude. (The bitrate, for example, averages a paltry 6mbps.) The Dolby Digital 5.1 audio is more objectively successful, if front-oriented.

Extras include "Behind the Scenes of The Squid and the Whale" (10 mins.), a compilation of amateur B-roll interspersed with junket soundbites from writer-director Noah Baumbach. Since the actors are excluded from the remaining supplements, it's worth a cursory viewing. (Again showing the influence of producer Wes Anderson, the piece was sired by Baumbach's brother Nico.) Meanwhile, "A Conversation with Noah Baumbach & Phillip Lopate" (38 mins.) is compelling enough to overcome suffocatingly rigid camerawork and celebrated author Lopate's generally inarticulate line of questioning. It helps that Baumbach has shed a lot of the smugness he displayed on the DVD for The Life Aquatic with Steve Zissou, and though his answers sound a little canned (clearly this Q&A, wherever it was conducted, came at or near the end of Baumbach's press tour), he opens up to a gratifying extent about the roman à clef aspects of The Squid and the Whale. In an especially amusing exchange, Baumbach says he doesn't really care whether the film offends any members of his immediate family, to which Lopate responds that he himself still feels guilty with regards to some of the non-fiction he's written, prompting a deadpan "Yeah, so do I" from Baumbach.

Baumbach flies solo in an untraditional 52-minute commentary track that plays over production stills and concentrates mainly on his individual collaborations with the cast. ("If I really had anything more to say about the movie," he begins, "I would've put it in the movie.") This is a top-flight collection of anecdotes but the static backgrounds grow tiresome as does Baumbach's evasive discussion of Owen Kline, who not only had already appeared in the directorial debut of Baumbach's wife Jennifer Jason Leigh (The Anniversary Party), but also has famous parents (Kevin Kline and Phoebe Cates) Baumbach never mentions by name and makes out to be a pair of greenhorns. On the other hand, when he notes he had to curb the temptation to treat Anna Paquin like a toy--kindred spirits, man. (Okay, so maybe I'm taking him a little bit out of context.) Startup trailers for The Tenants and London plus menu-based previews for Capote, The Dying Gaul, It's All Gone Pete Tong, Junebug, London, Pretty Persuasion, Saint Ralph, The Exorcism of Emily Rose, The Tenants, Thumbsucker, and Where the Truth Lies put the finishing touches on an exquisite platter. Originally published: March 23, 2006.