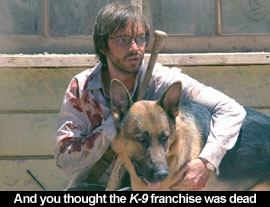 by Walter Chaw Alexandre Aja's follow-up to his hateful-but-effective High Tension is a hateful but not particularly effective remake of Wes Craven's The Hills Have Eyes. Opening exactly as Dr. Strangelove ends, with a montage of mushroom clouds set to soothing WWII-era croons (shock-cut with babies deformed by Agent Orange), the film all but declares itself a sardonic satire of the madness driving the United States' military policy where the original was pretty much a look at the country's simmering caste divide. Aja hopes to draw a line from the atrocities committed in Vietnam to atrocities committed in the desert against enemies of Our Own Making--and along the way, should a throwaway jab at the plight of subsistence miners be hurled and a few mutants get impaled by sharpened American flags, well, so be it. I'm not saying that there's nothing rotten in the state of Denmark, I'm saying that I don't care for a French filmmaker making a contemptuous, smug, proselytizing allegory about the legacy of Yankee colonial/expansionist violence. I don't buy Aja's outrage as anything more than practiced and ill-considered, the equivalent of those sick fuckers who drive around with pictures of aborted fetuses on the sides of their vans or set up haunted houses in their churches with any number of right-winger nightmares. As it doesn't teach anything new in any ways that are imaginative or truly horrifying, only the true believers are gratified, and then only by those same florid, ignorant little jabs.

It follows along the strictures established by the first The Hills Have Eyes and other splatter movies as a group of city slickers stop at the creepy last gas station, decide upon a shortcut, and wind up at the mercy of a band of degenerate hillbillies. The sons of the earth this time around are literally birthed from terrestrial wombs, the descendants of miners who refused to evacuate when the military tested nuclear weapons in the New Mexico desert and emerged, Sawney Beane-like, to eat the flesh of their un-mutated brothers. Some of the beauty of the original lay in the ironic paralleling of the family structure of the civvies with that of the muties, but that's jettisoned in this updating along with any kind of character development for the bad guys. (For a film wanting to portray the tragedy of the repressed, it sure does a lot of marginalizing of the repressed.) A rape, the gentle abduction of a baby, and the joyful immolation of head Republican paterfamilias (verily, he identifies himself as such) Big Bob (Ted Levine, seeing the other side in Silence of the Lambs) are each carried off with a remarkable lack of tension or investment. I can't say I was rooting for the Cirque du Soleil-ized miners, exactly, only that I was never nervous that the "wrong" good guys were going to get killed: something about the style of it feels squeamish and crowd-pleasing to me. I didn't like Hostel, but Hostel was at least lawless.

What does get the blood pumping (the end to which Aja both aspires and feels superior to), though, are the vicious murders of the villains in a sequence that can only be described as cynical and pandering. Aja knows that most of the young male (and dumb male) audience for this film will cheer, and sure enough, cheer they do as limp-wristed Democrat Doug (Aaron Stanford) takes up the axe (and that sharpened Old Glory) and does some Old Testament mutant-stomping as the score swells patriotically. But Aja also believes that the rabble being roused by his rabble-rousing is proof that America is driven by a degenerate Old West manifest philosophy rather than evidence that he not only has not made his point to anyone who needs to hear it, but has become part of the problem, too. Consider when the hero dog kills a completely defenseless guy in a wheelchair, or when the red-riding hooded mutie Ruby (Laura Ortiz) sacrifices herself for the sake of the sadistic city dwellers in the most ambivalent moment in the picture.

Highlights arrive in the form of veteran character man Tom Bower as a guilt-ridden gas station attendant, young Dan Byrd as de facto man of the city family and steward of all the rage and gun issues (daddy has Dirty Harry's .45 used against his wife and daughter) implanted him by our culture of violence, and by the bald fact that Aja knows how to shoot a film when he has to. But The Hills Have Eyes is just a dumbed-down, ineffably watered-down A History of Violence sans character development, introspection, nuance, or maturity; the open hostility Aja harbours for his audience obscures its full-frontal assault on America. It reminded me of an adult teasing children into incoherent rages: the subtleties are lost and all that's left is one party that really needs to grow up. Originally published: March 10, 2006.