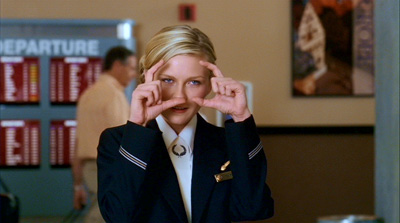 by Walter Chaw Casting about wildly for that elusive "Lubitsch Touch" so prized by his hero Billy Wilder, underdog-uplift auteur Cameron Crowe has patched together Elizabethtown: an awkward, shambling, Frankenstein's monster of a romantic screwball farce that, for all its slickness, shows off every one of its bolts and stitches in monstrous bas relief. Crowe piles on the pathos in this tale of fallen shoe designer Drew (Orlando Bloom), who travels from the West Coast to the semi-Deep South (the titular Elizabethtown, KY) to collect the ashes of his freshly-dead father for the purposes of a maudlin (and interminable) eleventh-hour road trip. "We should have done this years ago," says Drew to his dad's earthly remains, wiping away a brave tear, but for as machine-calibrated as the scene is to pluck at the heartstrings, there isn't--as there isn't at any moment in this film--a hint of authenticity to the sentiment. It's hard to question Crowe's earnestness, but it's easy to point at the alien remove of this picture and speculate as to whether the mom-dependent Crowe (has anyone checked to see if he's still attached to her umbilically?) has ever had a genuinely examined emotion regarding his pop.

What is, evidently, the central, crippling psychological issue in the development of a boy into a man (his relationship with his dad) seems to have left only cliché and the need for various surrogate mother figures in Crowe's pictures--mother figures as both sexual partners and apple-cheeked caricatures. It's tempting to throw around popular psychology (failed Oedipal splits and Madonna/whore complexities) in order to grasp at anything that could explain how something like Elizabethtown could have happened--and a pretty bad sign any way you turn it. On the flight down to the aw-shucks hick-bashing down-home reunion, Drew meets quirky™ flight attendant Claire (Kirsten Dunst), a woman garrulous in a way more disordered than disarming and given to taking pantomime snapshots of precious moments and coining faux-melancholic phrases like "I'm impossible to forget, but hard to remember" and "We're the substitute people." Claire is, in other words and in any way that matters, the microcosm of everything that's wrong with Elizabethtown: she's an android programmed to bestow idiosyncrasy like a Pez dispenser geeked at regular intervals--an artificial simulacrum of charm made more disturbing in that this Hall of Presidents ride is calibrated to spew platitudes on grief and new relationships instead of The Gettysburg Address.

Start at the Country Bear Jamboree, though, on this E-(lizabethtown)Ticket ride, as big-city Drew meets the country mice. They're affable folks given to potlucks and a-feudin' and a genuine veneration of Lynyrd Skynrd Crowe treats with irony until a late-picture tribute during which he treats it with veneration, too. That tension/confusion between scorn and reverence is the only tension of the piece; you could describe it as two kinds of patronizing. See it cropping up in the character of Drew's widowed mother: in a flurry of manic energy after her husband's passing, Hollie (Susan Sarandon) proceeds to improve herself by learning stand-up comedy and tap-dancing--anything that will allow for slapstick comic whimsy (in learning to fix a car, the hood falls on her and she kicks her legs hysterically), which becomes as deadly as cancer during an ill-considered eulogy at a memorial service that stands as one of the most painful moments in movies this year. (It's the nadir of a career that has seen Sarandon in The Rocky Horror Picture Show and Paul Mazursky's Tempest. It's actually bad enough that if shame were in her lexicon, it'd wash the taste of performing right out of her mouth.) But just as you think that the memorial service will be the witless climax to a listless picture, Crowe sends Drew out on an extended road trip armed with a scavenger hunt and a collection of mix-tapes made for him by his "That Girl" in a red hat, thus extending the film by another third following a first two-thirds that already feel like an eternity.

It's a twenty-minute musical montage--a VH1 classic video presentation that has Crowe emptying out his record collection to the doll-eyed gesticulations of Bloom doing a fascinating imitation of a marionette and Dunst providing a hackneyed voiceover in an accent that might be Southern but is so elusive I could never hone in on its peculiarities. Elizabethtown mistakes countless scenes of people throwing their hands over their heads as they're walking away to some alt-pop tune as poignancy while mistaking Bloom as a viable romantic lead when he's more accurately a plaster casting of one. It's a picture that has a couple of genuine-seeming moments drawn out like slow taffy until they're rendered a funhouse version of a genuine moment (the best bit of the film might be Drew dancing by himself--it only lasts ten seconds). The subplots it chooses to resolve (like a kid in need of a spanking) are inconsequential to the events left open (like how was Hollie convinced to attend a memorial in a state and amongst people that she abhors? (Editor's Note: this was addressed, albeit obliquely, in the so-called Director's Cut that screened at this year's TIFF), and all that's left for us to speculate is why it is that Crowe seems more invested in the cute than in the critical. It's a deeply compromised film, Elizabethtown, one in which Crowe's penchant for populist uplift betrays his desire for deeply-felt confessional memoir (the best template for how to examine grief and unresolved father issues without making a "downer" remains The Royal Tenenbaums), and sabotages that throbbing heart on its sleeve. Originally published: October 14, 2005.

THE DVD
by Bill Chambers Paramount presents Elizabethtown on DVD in competing widescreen and fullscreen editions; we received the former for review. The 1.78:1, 16x9-enhanced transfer falls victim to overfiltering, something that seems to strike the Mountain's titles at random. Saturation is exemplary, but the image has all the fine detail of a butter sculpture. Accompanying Dolby Digital 5.1 audio is a slave to the pervasive music cues, which are quite often sourced from simple stereophonic recordings. Extras are mercifully brief, if unbearably precious. In "Training Wheels" (2 mins.), we get a montage of costume tests and rehearsal footage set to folkie rock, while "Meet the Crew" (3 mins.) is more of the same, but with subtitles identifying the non-actors. Under "Extended Scenes," "Rusty's Learning to Listen Part 8" is featured in full, and "Hanging with Russell in Memphis" mixes a seemingly-improvised encounter between Drew and a bartender of Memphis legend with behind-the-scenes footage of same. A photo gallery, two trailers for Elizabethtown, and previews for the Ferris Bueller's Day Off Bueller... Bueller... Edition, "Charmed", Yours, Mine & Ours, and Aeon Flux round out the platter. Originally published: March 28, 2006.