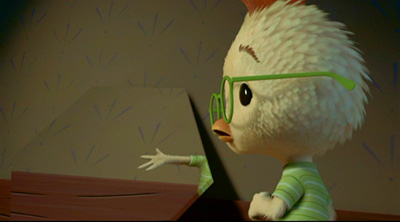 by Walter Chaw Frantic, frenetic, anxious, obnoxious: the ideal audience for Chicken Little should be in bed by seven, and Disney's umpteenth cry of "sure-fire comeback project" looks, appropriately, like another convulsive episode of corporate crying-wolf. Chicken Little, for instance, makes pop culture references that don't mean anything in the context of a film whose sole purpose appears to be instructing your children to be fearful and hyper. They're just there to give parents, alternately stunned and bored, a little rootless pleasure in the middle of epileptic flash; what's left isn't clever (or kinetic) enough for us to ignore its essential emptiness. What Chicken Little is more than anything else is exhausting. You could by rights hope that it's is a send-up of the Fifties cycle of Martian invasion pictures (it name-checks War of the Worlds for no good reason) as The Incredibles was a send-up of Golden Age superhero comics, but even a cursory comparison between the two films shows that Disney's desperation to make Pixar's looming secession a non-issue is as limp and impotent as the Nevada State Boxing Commission.

Careful not to upset the applecart in any way, Chicken Little posits the titular fowl (voiced by Zach Braff) as a victim of cranial upset, twice pelted on the bean by pieces of the sky. Of course no one believes him until it's too late, but instead of some politicized natural disaster, the falling sky forecasts a full-bore alien invasion massed against Little's sleepy, multi-species hamlet of Oakey Oaks where, in a disturbing throwaway moment, the anthropomorphized animals use a goat, wheelbarrow-style, as a lawnmower. It's the equivalent of a shot in the background of any other picture with a man using another man--perhaps of another race--to clip the hedges. Compare it to the salmon slaughter of Brother Bear as something you might think is stupid but that won't seem so innocuous to your children, who are smarter and more observant than you are about these things.

Add to the weirdness an underused bitch-goddess villain, Foxy Loxy (Amy Sedaris), who's transformed into a Southern Belle by the alien's obliterating death ray, as well as a sidekick pig, Runt (Steve Zahn), who speaks in Air Supply lyrics, is inspired by an invocation of Gloria Gaynor's fag anthem "I Will Survive," is caught in the act of Spice Girls and Captain and Tennille karaoke, and is threatened with a grounding from his Streisand records for his bad behaviour. Small wonder, I guess, that the film's jokey coda, which lampoons (but gently, gently) Hollywood's penchant for hyperbole, finds Runt transmogrified, Foxy Loxy-style, into a full bore pig of masculine action. No accident, I think, that Runt gets to deliver the scene's punchline (something along the lines of how accurate it all is), as the muddy rivulets running off Chicken Little's main tributary mean more than I think they mean to mean.

Everything else--from the secondary characters' bizarre identity issues (including love interest Abby Mallard (the great Joan Cusack, typecast as the ugly-duckling best pal even in animation)) to the emetic production design and show-offy execution--is so distracting, in fact, that the central conflict of Little's dad (had I known Garry Marshall was in this film, I wouldn't have bothered) not listening to his son feels tacked-on and lifeless. Chicken Little tries to be all about family, as you might imagine (it being a Disney production), but its message is battered into inconsequence by an undisciplined torrent of gags. Also in the recent tradition of Disney animation, the picture appears to have no clue as to why it is that its once robber-baron grip on the field has slipped to the point that the Magic Kingdom is no better than mechanized schlock-houses like DreamWorks and Blue Sky Studios. Without a moral centre, with sloppy writing and character conceptualizing (nothing as bad as the gang rape inferences of Home on the Range, but another symptom of the same disease), you'd most likely forget Chicken Little as soon as it was over if your kids weren't repeating its obnoxious catchphrases into nausea. Disney eradicated their hand-drawn animation department for this? Originally published: November 4, 2005.

THE DVD
by Bill Chambers Disney presents Chicken Little on a FastPlay-enhanced DVD in 1.78:1 anamorphic widescreen. This is obviously a direct-to-digital port but the transfer is on a par with Pixar's early, single-disc releases in that it looks better-than-average but also a mite compromised in terms of fine detail. Joining the video is a surprisingly tame DD 5.1 track; of course, the song selections are so banal that they wouldn't give the speakers a workout under the best conditions, but aside from some decent low-end for the sci-fi components, the mix is as humdrum as the movie itself--although the audio on the DVD is without any serious defects. A strictly superficial batch of extras starts with a quartet of deleted scenes (13 mins. with optional intros from director Mark Dindal and producer Randy Fullmer, 10 mins. without) in various stages of completion. The most interesting of these is a sequence in which Chicken Little is a girl: according to Dindal/Fullmer, the character got a sex change on the advice of former Disney CEO Michael Eisner, who had the not-outrageous epiphany that being short is a bigger hurdle for an adolescent boy to overcome. Meanwhile, the late Don Knotts narrates an elided storybook prologue featuring a Where's Waldo? cameo by Donald Duck.

"Music & More" leads to music videos for The Cheetah Girls' "Shake Your Tail Feather" (oy) and Barenaked Ladies' "One Little Slip," as well as karaoke and sing a-long [sic] versions of the latter, while "Games & Activities" contains the interactive trivia quiz "Where's Fishy?". Last but not least, under "Backstage Disney" find the 5-part "Hatching Chicken Little: The Making of the Movie" (18 mins.), wherein Dindal makes statements about the film's place in the Disney canon (apparently it's in the tradition of "memorable characters, great storytelling, eye-popping visuals, and emotional music") that would be arrogant if they weren't merely delusional and the Barenaked Ladies jam out an impromptu rap-ballad that's superior to the song they recorded for the soundtrack. Fans of the film's eclectic cast will be treated to plenty of recording-booth footage but nothing in the way of interviews. Fishy indeed. Sneak peeks at The Little Mermaid Platinum Edition, The Wild, Dumbo Big Top Edition, Cars, Airbuddies, Howl's Moving Castle, Brother Bear 2 (or "When Animals Fart"), The Chronicles of Narnia, and "That's So Raven" round out the platter. Originally published: March 27, 2006.