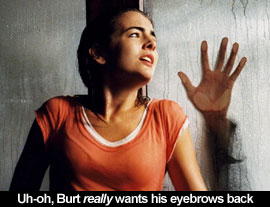 by Walter Chaw There's nothing patently, obviously offensive about Simon West's abominable remake of the already awful "thriller" When a Stranger Calls: It's neither misogynistic nor racist nor really anything more than exactly what you'd expect from a project like this, dumped as it has been in the wasteland of another early-February. It's so studiedly inoffensive, in fact, that you could take an elderly nun to it and there would be nary a flutter in her rigidly tender sensibilities. It tittles no ates, manufactures no suspense, and no one in a packed audience of four-hundred folks at the preview screening rustled an inch when the cat--not once, but twice--provided the false jump before the "real" one, though I confess the reason for that might be that by the time West and company get around to actually having something happen, most anyone with any kind of sense is asleep or halfway home. I've failed to mention that it's acted by heavy-browed lead Camilla Belle (as babysitter Johnson, Jill Johnson) like a toy robot with her key only half-wound. Were she to have run out of juice negotiating a wall and leaned there motionless, I wouldn't have batted an eyelash.

If you want to spend any time analyzing it, the problem with When a Stranger Calls is that every single thing it sets up it fails to follow through on. There is literally and metaphorically nothing going on in this film. The narrative (a crank caller menaces an isolated babysitter) is stagnant, the visuals are achingly pedestrian, and the twist (spoiled by the picture's own trailer) is stolen from Black Christmas. If it were paint, When a Stranger Calls would be pale beige. Whenever a moment is ripe for virginal slasher-film sexual subtext--like when Jill sucks on a cherry popsicle, or when her slutty best friend appears very briefly and threatens to do a few tequila shots--West's matronly chastity causes him to recoil like a finger from the fire. Fireplace poker as surrogate phallus? Nope. Overactive fireplace as devouring vagina? Nope. Maternal instinct awakened subsequent to symbolic deflowering? Fuggedaboudit. Reunification with boyfriend or continued strife with stern father leading to displaced psychosexual vengeance visited upon the mysterious interloper? Nah. And any irony concerning how Jill and co.'s beloved technological crutch, the cell phone, becomes the proverbial rack of choice for some faceless killer (Tommy Flanagan, voiced by Lance Henriksen and given zero backstory or meaning) is ignorantly overlooked in favour of interminable sequences involving West fetishizing the wax-like Belle in medium close-up as she, yes, answers and talks on the telephone. Indeed the killer is only distinguished by the fact that he somehow does his dirty deeds without weapons--which is intriguing in a berserker sort of way, but even that, by the end, is cast aside by the implication that this monster's weapon of choice are his jazz hands. It's scary, sure, but for all the wrong reasons.

Films like this are more sad than anything else. They don't exhibit any malice in their existence, suggesting instead that everyone involved was doing the very best they could and this is what they came up with. Unlike a child's clay ashtray, though, When a Stranger Calls invokes a state of permanent retardation in which creative evolution from this point forward is unlikely. What other conclusion can we arrive at when tension is imagined in that old saw of a new car not starting at a moment of crisis? (Where a girl hiding in a koi pond is safe from an attacking bogey who, for whatever reason, isn't allowed to get in the water.) It's an inexplicable PG-13 for the rare reason in modern horror that there's nothing whatsoever in it that would prevent it from being shown on your local PBS station (I've seen rougher stuff on "Bear in the Big Blue House"), and such a stilted, inept mess in every other way that I also can't imagine any television network outside of maybe Lifetime stupid enough to air it. Once the lights came up, not long after one of those fake-out dream sequences (but "faking out" whom?) where the girl imagines that she's hunted still in an ostensible sanctuary, I heard a lot of incredulity and laughter from the exact mainstream audience to which this film hopes to pander. It's good sport to lambaste the popular taste, but you continue to make asinine, incompetent flicks for an imagined demographic of rich morons and the bill inevitably comes due. You can fool some of the people some of the time, but you never fool anyone with loose stool like this. Originally published: February 3, 2006.