**/**** Image A- Sound B+ Extras C-
starring Emily Watson, Tom Wilkinson, Rupert Everett, John Neville
screenplay by Julian Fellowes, based on the novel A Way Through the Wood by Nigel Balchin
directed by Julian Fellowes 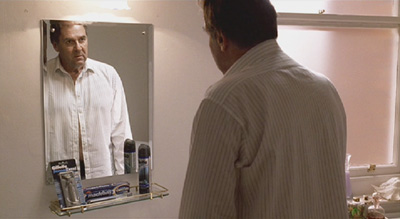 by Walter Chaw You could call Separate Lies either a second pass at Asylum or just another drop in the English prestige bucket that finds the stuffy upper-crust married to silly women who bring down their country estates of cards. It hinges on performances when it can no longer surprise with its domestic meltdowns, and because its stable of English actors is stocked with more thoroughbreds than the Kentucky Derby, it gains a lot of currency in doing so. But Julian Fellowes's very British symphony of "sorry"s is extraordinarily familiar--an Adrian Lyne film without slickness or sex about what happens when a desperate housewife dabbles in the dangerous and the commensurate desperation with which her stiff-upper-lip husband scrambles to keep his dignity and status intact. It'd make a bigger impression if we learned more about the class struggle in Britain, I think, but without experience in the whys and wherefores of that caste system, what we're left with is a superbly-performed melodrama with a strained premise dissected in airless, suffocating situations.

Married to successful solicitor James Manning (Tom Wilkinson), flighty, mousy socialite Anne (Emily Watson) begins an affair with reptilian blueblood William (Rupert Everett) in a series of nicely-underplayed flirtations. Separate Lies is all about propriety and thus goes about its business with absolute, stultifying dignity. When a terrible accident happens, the truth of which will reveal Anne's infidelity, James steps in to lend his influence as an alibi to the guilty couple to protect his reputation as much as his wayward wife. Meanwhile, dogged Scotland Yard inspector Marshall (David Harewood), serving almost the same function (and of the same race) as Mos Def's bright, inquisitive, vaguely menacing inspector from The Woodsman, circles the guilty triangle like a vulture waiting for their falsehoods to disintegrate.

Needless to say, perhaps, the cast is excellent from top to bottom, with special notice going to Hermione Norris as James's wants-to-be-chased-around-her-desk secretary. But there comes a point where one realizes that the performances may be all there is to the piece. Though Fellowes fights Separate Lies' stunted import and stagebound theatricality (it's actually based on the Nigel Balchin novel A Way Through the Wood) with noir mirrors reflecting split personalities and deception, as well as a scene here and again set at a cricket match or in the sprawling library of an aristocratic country neighbour (as in a pair of conversations between John Neville and Wilkinson, sublime as you'd imagine), he's ultimately at the mercy of material so fussy that no amount of frenetically-chopped vegetables can lend the piece much in the way of tension. It's a literary bit of sociology that scrapes bottom with a reference to the tragic roundelay of Turandot while touching on unintentional hilarity in the superhuman dignity with which the characters approach their indignities. (Compare Wilkinson's private moments with the audience against Michael Caine's in The Quiet American.) Only Everett's half-lidded, sunken-eye performance captures something of the right tone for this stuff, paddling listless with one hand trailing behind along the shallow border separating bored and bemused.

THE DVD
by Bill Chambers Fox shepherds Separate Lies to DVD in 1.82:1 anamorphic widescreen and cropped fullscreen presentations that reside on opposite sides of a flipper. The film simply gleams on the format, with a persistent layer of fine grain affirming that the robust clarity of the image is organic and not the result of edge-enhancement. Shadow detail dips a little in low-lit scenes but it's barely worth mentioning. The Dolby Digital 5.1 audio, on the other hand, is as reserved as the characters are save the low-frequency wallop that accompanies every incarnation of the pivotal bike accident. Writer-director Julian Fellowes contributes a fairly awful, if chipper, feature-length commentary in which the Oscar winner goes on about character motivation to the point of second-guessing the effectuality his script and cast. Emily Watson and co. are given their due, however, in a couple of warm anecdotes nested in the track like Easter eggs. Separate Lies' theatrical trailer rounds out the disc, whose protracted menu screens are even more soporific than the film itself. Originally published: February 13, 2006.