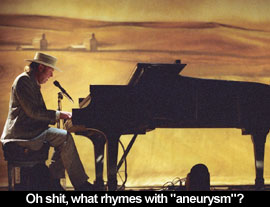 The new songs are plaintive touching on maudlin--repetitive and circular in the Young style (to the extent that he ever had an identifiable hallmark). But Demme and cinematographer Ellen Kuras (who photographed Eternal Sunshine of the Spotless Mind and Bob Dylan: No Direction Home) manifest the melancholy in Young just as Demme and the late great Jordan Cronenweth made literal the scattered, discursive madness of The Talking Heads more than two decades ago. It's the perfect companion piece to Jim Jarmusch's couldn't-be-more-different Neil Young documentary Year of the Horse: place the two side-by-side to find a chronicle of the maturation of an artist who ploughs a demilitarized zone between his "Old Man" and that twenty-four-year-old hippie with a guitar, growing now into the twilight of his mortality.

The first hour of the piece is predominantly new material, the highlight for me a number called "Here For You" that Young dedicates to his daughter turning twenty-one ("An empty-nester song. Maybe a new genre," he deadpans), augmented by Demme with a shot of the Memphis Strings backup players standing after their contribution to the song then filing off the stage. It's subtle in the way it's edited and composed of medium shots--and it just breaks your heart. Unobtrusive, Demme's gift--and his greatest contribution--is in comprehending the song and, moreover, the language of images in such a way as to critique the moments as they occur. Neil Young: Heart of Gold, then, is a piece of performance art that's constantly in the process of critiquing itself and, in the examination, revealing parts of itself hidden or, in its best moments, old songs transformed by new events by the alchemical agent of terrible experience. When Young wails "I want to live" at the beginning of his classic "Heart of Gold," continuing into "And I'm getting old" as the song's repeated affirmation, it's melancholy where it was once defiant, with no "better to die young than to fade away" anywhere in the set list.

Young performs his junkie dirge "The Needle and the Damage Done" acoustic, alone in the spotlight on Ryman Auditorium's darkened proscenium in much the same way that "Psycho Killer" opened Stop Making Sense. But the caesura occurs towards the end, now, not in the metronomic calm before the storm but in a contemplative breath, taken and held for a minute before blowing through an encore of Young's most wistful selections. The only song missing that I would have liked to hear is "Differently"--but maybe that makes the point too broadly. The fact is that Neil Young: Heart of Gold suggests an artist at peace with his decisions. The mad monk, eternally dissatisfied with the world and at war with his demons, has become an old man with a grown daughter he loves and misses, at enough ease to write a song about his guitar--which used to be Hank Williams' guitar, and will someday be someone else's guitar. His roadie talks with amazement as he tunes it at the beginning of the film ("Do you know the songs that were written on this?"), and Demme finds all the major players in means of conveyance on their way to the two nights melted together in the picture. The film is about the journey; if the art is good, it illustrates the past with the same intensity and brilliance as it bounces off the present. Neil Young: Heart of Gold is immediate and timeless. What I'm saying is that you don't have to already be a fan. Originally published: February 24, 2006.