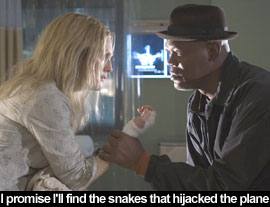 by Walter Chaw Given that Joe Roth (America's Sweethearts, Christmas with the Kranks) directed it, Freedomland's first and biggest surprise is that it's not worse than it is. Maybe that has something to do with Samuel L. Jackson delivering his best performance since Changing Lanes, or a Richard Price screenplay (adapted from his own novel) that, while overwritten throughout and unforgivably histrionic by its end, manages to present its tensions with topicality and a passing familiarity, at least, with the complexities of race relations. It's deliberately set in 1999, just a few years after South Carolina mommy Susan Smith drowned her two children in a lake and blamed a non-descript "black man" in a knit cap for their carjacking/abduction, and the similarities to the Smith story continue through to incredulity in the black community and the involvement of activist parental groups. (Freedomland meanwhile takes place a decade after another case it seems to be based on: Bostonian Charles Stuart killing his pregnant wife and blaming a black guy, stirring nearby black suburb Roxbury to outrage.) Marc Klaas to the film's Susan Smith is child-safety advocate Karen Collucci (Edie Falco), while the New Jersey barrens--and, in its narrative fulcrum, a burned-out children's asylum called "Freedomland"--stand in for the wilds of the Deep South. The picture abounds with such similes and ironies, existing in a bizarre, terrifying version of the United States where iron-willed armies of the bereaved march through the blighted wastes of urban decay with sticks and resignation, looking for lost children they know, more likely than not, to be dead and, more, victims of their own parents.

You could call it a portrait of guilt, a war metaphor, or, broader, a journal of our divisive plague years stretching from the deaths of Malcolm X and Martin Luther King to Rodney King and O.J. Simpson. But at its heart, Freedomland is a dark fairy tale without a moral or, really, a resolution--a hopeless yawp offered up against the ruins of modern racial and cultural relationships. Those looking for an allegory of the Culture Wars could do worse, though by itself its fascination is in neither the martial lockdown of its underprivileged black neighbourhood Armstrong nor the quick, bigoted response of the wronged underprivileged white neighbourhood Gannon (detective Danny Martin (Ron Eldard) calls Armstrong a "jungle" where one of the "monkeys" got loose--all in front of his black superior officer), but rather in detective Lorenzo Council's (Jackson) role as sandwich meat stuck traversing the no-man's land between defender of his race and upholder of a broader, perhaps anti-black, public justice. He's a black man standing in the middle of lynch mobs on both sides (in place of the white men in the Wells and Stuart cases), trying to figure out whether coked-out, red-eyed charity case Brenda (Julianne Moore, losing another child in another melodrama) is telling the truth about her four-year-old boy getting carjacked by a non-descript black dude in the middle of something called "Martyr's Park." Sure enough, the first shot of the film is a wailing Brenda with stigmata on her hands, stumbling into an emergency room, the symbolism broad and lost on no one: Brenda will be put on the cross for this nation's ills though she almost certainly knows not what she does.

Would that we were allowed the same level of ignorance, however, as Roth and Price conspire to underscore every nuance of their piece with fireworks and a brass band. A final monologue from Brenda in one of those pale green interrogation scenes stretches for close to ten interminable, unbearable minutes of Moore doing what she does best: playing hysterical. It's not a good performance, exactly, but it is an attention-getting one, and failing good, you might as well cause a racket to bully people into the belief that it's good. It's a philosophy Roth himself adopts with every superfluous camera motion and every antic edit, as well as one that Price takes to heart by having his characters wrestle with words like "over-abstain" and "un-precious." Jackson, though, is genuinely excellent (and supported by William Forsythe in a brilliant turn as Council's understated partner), and his scenes with a jailed son (upon whom he mistakes a Tupac tattoo for Buddha), if obvious for the fact of them, are unusually reverent in their execution. There's something broken in the world of Freedomland, just as there's something broken in the United States--enough so that relating an abandoned orphanage for neglected foundlings for this country pinioning between its series of critical junctures makes a certain kind of melodramatic sense. It's a film that would have starred Joan Crawford in another lifetime, doomed for the same cult appeal in a few years hence, yet for a moment in time, the clouds part and a movie like this strives for real significance. If it falls short, blame Moore's completely unsympathetic one-dimensionality, Roth's blazing incompetence, and Price's self-importance. Freedomland is the "Together We Stand" mural that stands in the middle of its Watts: unapologetic yet obvious. It's the Mildred Pierce of the new millennium--the world's loudest whimper. Originally published: February 17, 2006.