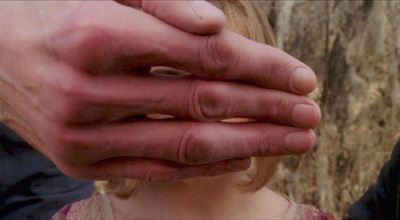 by Walter Chaw Jim Sheridan's In America sees the nation's shores as the limits of a grand, dilapidated moviehouse, introduced at the border with The Lovin' Spoonful's "Do You Believe in Magic?" and sustained by the ideas that all deaths are dimpled with nobility, and that all life is instilled with the fever dream of an insomniac's carnival. Sheridan's all-night ice cream parlors are, of course, Edward Hopper paintings populated by pink-clad waitresses, while screaming men haunt his rundown tenement brownstones ("This house isn't haunted, it's a magic house"--referring to the domicile, then America), artists and mystics marooned on emotional floes by some seismic existential divorce. And his heroes are a family, aliens in America illegally who discover that their only ward against life's necessary evils is a faith in imagination and a fingernail declaration of hope.

Sheridan's view of America is a curious fancy, a place where the death of a beloved child is reconciled with a trip to the movies, a doll won at a toss game, and a baptismal bout of lovemaking culminating in a declaration to the camera that "this is make-believe." If the picture is nothing more than melodrama, it's at least melodrama comprising real emotions and the intelligence to understand that looking into a film is a practice lunar not only by dint of its borrowed light, but also as the repository for a collective romantic mythopoeia. Tim Burton, too, treads the territory of America as grand cinema in his best films, and Big Fish, while not among them, leads the director back to their territory, the modest fairy tales of grotesquerie of Pee-Wee's Big Adventure, Edward Scissorhands, Ed Wood, even the underestimated Batman Returns and Sleepy Hollow.

In America's Johnny (Paddy Considine) and Sarah (Samantha Morton) have two daughters who lived, Christy and Ariel (Sarah and Emma Bolger), and a son, Frankie, who didn't. Sheridan, writing with his two daughters, had a brother, Frankie, who died, too. In America is a personal film, then, but it feels like one too in that it takes the process of loss and explores it from the perspective of often-hallucinogenic interiors, providing a look at a blue New York metropolis that, along with In the Cut (and even though it's set in the early-Eighties), provides a fascinating look at the city haunted by ghosts two years after 9/11. Something about that setting gives the picture a roomier feeling: Its examination of loss and struggle and love and hope is not archetype, but it comes close.

There's a strong whiff of magic realism to the film, elements introduced by snippets from old films like The Grapes of Wrath and Earth vs. the Flying Saucers to illustrate the family's journey, or highlight the symbolic significance of tortured, AIDS-stricken artist Mateo (Djimon Hounsou)--at once the film's weakest element and, by its end, its moral and metaphorical strength. The idea that all the inhabitants of Johnny and Sarah's building, the junkies and transvestites, are aliens in a strange land is peculiarly edifying of an American dream that, after all, is the jealous purvey of transplants and émigrés. If In America walks the same tightrope as Stephen Frears's Dirty Pretty Things, its heroes too saintly, its resolution too neat, it nonetheless has the advantage of knowing itself as a shrine to memories that time has recast as a limpid, lovely fantasy.

Big Fish finds Edward Bloom (Ewan McGregor and Albert Finney) on his deathbed, spinning tall yarns about his life to the irritation of estranged son Will (Billy Crudup), who wishes to "know" his real father without understanding that the fabric of personal fiction is the whole cloth of a man. At question is the very nature of storytelling and folklore, a question that gains primacy when asked by strangers (even those like Edward, who only see themselves as strangers, too big for the mundane) in a strange land. Steeped in magic realism, Burton's picture loses steam in its constant switching from past to present, but gains in a treatment of grief and the grieving that announces a maturation of the sad moods of the director at his finest.

Cinematographer Philippe Rousselot rediscovers the dappled Americana of his work on A River Runs Through It and, on occasion, the darker American gothic of his work on Flesh and Bone, and Coen Brothers production designer Dennis Gassner provides a look carefully pitched in a liminal space between eternal and familiar. Big Fish is Burton's most handsome film by far, giving the manifestations of Edward's flights of fancy a pleasing rustic feeling while offering Alison Lohman and Jessica Lange (as the younger and elder incarnations of Edward's wife, Sandy) a light that elevates them soft into the lofty clime of immortal beloved.

Above it all, however, there is in Big Fish the ineffable feeling that something is broken about the way the picture is edited: punches are pulled, a few of the climaxes fumbled. Failure in editorial pace and decision-making is, arguably, Burton's most obvious weakness as a director--undermining the effectiveness of his beautiful grotesques and alluring tableaux (most notably in Batman and the frankly unsalvageable Planet of the Apes), and, in this instance, muting the performances of a cast that finds only the vaguely drab Crudup to be lacking. Still, for all its failings, the picture pulses with a sentimentality that feels honest and unpretentious. It's in love with telling tales and the transplant heart of the United States, and with the dreams of small men living lives too large for reality. Edward Bloom is an artist, and tall-tales are his medium. A yarn particularly suited for the cinema, Big Fish is a beguiling fantasy that questions, in the gentlest terms, the ways in which our memories of loved ones passed sometimes flower into golden boughs. Like In America, Big Fish poeticizes the humdrum, placing its characters (also reeling from a death, this one impending) in a space that defeats narrative analysis while evoking, in a roomy, allegorical, sometimes surreal way, the inexpressible largeness of grief--and the restorative powers of art and dreaming. Originally published: December 10, 2003.

THE DVD
Mark Salisbury, author of Burton on Burton and a writer for PREMIERE, moderates a feature-length commentary on Sony's DVD release of Big Fish with the notoriously inarticulate Burton, a decision that yields fulsome fruit: Paired with a knowledgeable and familiar interviewer, Burton can be quite the chatterbox. He says, for starters, that he was attracted to the John August script because he'd just lost his father while clarifying that the Finney character's sickbed scenes didn't carry a truckload of psychic weight with him because he wasn't actually present for his father's passing. It's a small detail, I suppose, but I'd hazard that it's really not in the long run and, moreover, that it points to the ultimate lightness of Big Fish in that Tim Burton way. Among acknowledged auteurs, Burton seems particularly bound by the epoch in which his pictures are made. They date, badly, and in the case of Big Fish, that feeling of time-bound inconsequence begins as soon as the film unreels. Though Burton jokes that he's most-often lambasted for not being a good storyteller, I'd offer that this little anecdote about proximity/distance does more to explain why his pictures have so ephemeral an aftertaste. The commentary is good, however--maybe the best Burton's ever recorded.

Two featurettes also decorate the platter, with the first, "The Character's Journey", split into three individual segments. "Edward Bloom at Large" (9 mins.) essays the arc of Burton's third "Edward" via B-roll of a pig chase and junket interviews with Burton, Finney, and McGregor. Recollections of the production are appropriately rosy; the usefulness of the thing? Questionable. Ditto the self-explanatory "Amos at the Circus" (5 mins.) and "Fathers and Sons" (7 mins.), though it warrants mention that the very serious Crudup tries harder to lend nuance to the plight of his character than the film itself does.

Clicking on "The Filmmaker's Path" unveils "Tim Burton: Storyteller" (7 mins.), wherein Lange names Beetlejuice as her favourite Burton, Lohman and McGregor Edward Scissorhands, and Crudup Batman; any hard data here is repeated in the commentary. The gist of these extras is that it was great fun shooting "several movies at once"--not a terrible insight as far as insights go, but it's only necessary that we hear it once. "A Fairytale World" (10 mins.) finds producers Bruce Cohen and Richard Zanuck discussing Tall Tales and how that's "Tim Burton territory." (It's not about anything is what I'm saying.) "Creature Features" (6 mins.) intrigues for the revelation that puppets were often used in lieu of CGI, something Burton now, generally speaking, disdains. F/X supervisor Shane Mahan expresses his gratitude towards that attitude, as you might expect. "The Author's Journey" (8 mins.) interviews Daniel Wallace (author of the novel upon which the film is based) and uncovers the inspiration for his original story in the process. If it isn't elucidative of anything specific, neither is it a total waste of time.

"Fish Tales" is a "white rabbit" function that essentially leapfrogs the viewer to one of the seven featurettes at the appropriate moment in the picture. Why you'd watch either the feature or the bonus material this way is a total mystery to me, but there you have it. Meanwhile, passing an easy "Tim Burton Trivia Quiz" unlocks an unspectacular piece on the special effects. Cuing up on startup are trailers for Secret Window and Spider-Man 2, previews you can likewise access through a sub-menu along with spots for 13 Going On 30, Hellboy, 50 First Dates, The Company, You Got Served, Something's Gotta Give, Mona Lisa Smile, The Triplets of Belleville, and Big Fish and its soundtrack. I could be a smartass and say that the softness of the film's more or less irreproachable 1.82:1 anamorphic widescreen transfer is directly related to the hours of previews, but it probably has something to do with the fairytale trope of the thing. The accompanying DD 5.1 audio makes rich use of the discrete channels. Listen to the woods during the spider sequence, or the end as Edward returns to the water; it's a standout track and the cherry on top of a relatively stacked disc that now comes packaged with a slim, hardly indispensible volume of uncredited production art (laced with Edward's fortune-cookie homilies) titled Fairy Tale for a Grown-Up. Originally published: February 7, 2006.