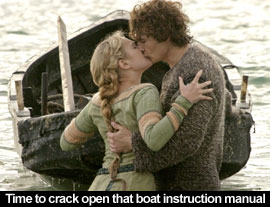 by Walter Chaw After bravely transforming the Robin Hood legend into a case of thirtysomething love jones with Robin Hood: Prince of Thieves, Kevin Costner's well-known ex-best friend Kevin Reynolds turns the Tristan + Isolde legend into a WB/TIGER BEAT-friendly, mouth-breathing bodice-ripper indicated by lots of backlighting, orgasmic slow-mo, and dialogue purple enough to blind a Bronte sister. It's shot like a perfume commercial and written like a florid creative-writing exercise, one packed with such AM Gold, Luther Ingram treasures as: "Why does loving you feel so wrong?" Well, it might have something to do with said love being the basis for the Guinevere/Lancelot adultery story in which a woman comes between a king and his most trusted knight, leading to the ideological and literal collapse of a kingdom. Or it might have something to do with the fact that the actors playing the lovers in question never for a moment manage to spark the soggy tinder packed beneath the story. This allows a great deal of time for the sentient beings left in the audience after the ten-minute-mark exodus to suss out why this thing was delayed, then dumped in the middle of the January dead zone. It also, incidentally, caused me to fantasize about somehow harnessing the ability of films like this to make 125 minutes feel like six days for youth-giving effects and racing box scores.

The whole thing is a catafalque for a hideous screenplay and a performance by young stud James Franco that begins with promise but conspicuously peters out as soon as he's asked to do something other than run and swing a sword. He freezes his face and half-fills his eyes as lovelorn fighter Tristan; the very Madame Toussaud effigy of Andy Gibb in a tunic, he lets his leonine mane do the emoting. The story, for the uninitiated, finds ferocious, haunted Pict warrior Tristan seriously wounded in Dark Ages battle and nursed back to health under the tender ministrations of Irish princess Isolde (Sophia Myles). Returned to his king (Lord Marke (Rufus Sewell)) and Cornish cohorts, Tristan proceeds to win Isolde (not knowing it's Isolde, of course) to be his king's queen. Sweaty teen melodrama ensues. A nicely-staged and executed fight to free female captives in a woodland clearing gives way to lots of the same semi-filthy PG-13 arrows-and-furs confrontations so recently bollocks'd-up by the nearly-identically awful Antoine Fuqua demystification (hey, great idea) of King Arthur. Though Myles is undeniably beautiful, left to her own devices to fashion Isolde into something other than a silly, inconstant, petulant little kid, she succeeds only in looking like she's going to cry no matter whether she's fucking, fighting, or shopping.

Tristan + Isolde is an exhausting film even though nothing much happens in it. A young Tristan is shown to be a pacifist of sorts until goaded into action by a subplot that will have its predictable pay-off in the third act. Meanwhile, nine years pass through the magical graces of a dissolve and a matching shot and suddenly Tristan is a polished swordsman and inspiring leader. Less is offered the heroine: Isolde loses her mother as a child and then, blip, Isolde's a master herbalist jealous of her virginity. You could speculate that the best bits are in those skipped years. You could also say that the picture is economical because it's so meticulous about its set-ups and rim-shots that Victorian robots seem to have graphed the trajectory of the narrative arc--but then there's the problem of its gangrenous bloat in almost every other respect, including a score by Anne Dudley that's comprised of violin notes held into meaningful piano couplets. It sounds like the score for The Legend of Bagger Vance, and if you thought that sprightly treacle was bad in a film about a magical black ghost helping a white golfer with his swing, you can only imagine what it's like as the only emotional clues in a Medieval epic romance-cum-Enya video. If you're trapped in a theatre with this adipocere, though, it's fair to wonder how it is that despite much laborious set-up, Isolde still doesn't connect the dots between the pufferfish-poisoned Tristan and her missing betrothed--and once wondered, consider that for all the people to blame for this disaster, maybe we're forgetting to give Reynolds's favourite editor Peter Boyle his fair share. Originally published: January 13, 2006.