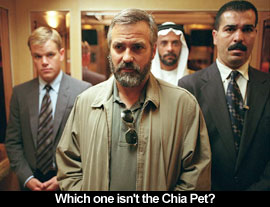 by Walter Chaw An omnibus of shorthand outrage standing in place of actual information, Stephen Gaghan's perfectly respectable--principled, even--Syriana reassures us with its glut of disconnected pop-up liberal soundbites that it's weary and wise enough for the both of us should it be the case, most likely, that we're just weary. But on the off chance there's nothing to connect to here despite all the grandstanding, it makes clear that at the end of the day it's really about something as simple as not taking your family for granted. Call it the secular Magnolia, itself a similarly longish, flashy film that was also about being kind to your children. There isn't anything for us to do with the dry intellectualizing of Syriana: once we're told that the CIA sends assassins around the world, that sometimes Arab kids are turned into suicide bombers by wackos, that the oil industry is a nepotistic disaster, and that as soon as the oil runs out in the Middle East, the emirs of Saudi Arabia will be back "in tents, chopping each other's heads off," what are we left with but justification for our under-informed fears and lazy superiority?

Oft-compared to the paranoia cinema of the 1970s, Syriana is different in that there's no longer any hope for us to affect change, and so the film offers in its place this encouragement for us to go home and be good to our kids. You realize something's up when ace financial advisor and pundit Woodman (Matt Damon) loses a son to an oil sheik's faultily-wired swimming pool before he himself is sucked into the charismatic vortex of said Sheik's Oxford-educated son, Prince Nasir (Alexander Siddig). A reformist sort of guy interested in giving women the vote and opening up the oil markets to competitive bidding (which would serve the film's mostly-invisible villains (the Chinese) nicely), he will of course be martyred for his ideals, ground in the gears of capitalism most-corrupt. (In the worst moment of the picture (aside from the kid funeral, that is), American wildcatter businessman savant (Tim Blake Nelson) explains to button-up sleazeball lawyer Holiday (Jeffrey Wright) that corruption is, in fact, expected and after all the way the world goes 'round.) Yet there's never any sort of inspiration to fight against this machine, to rail, to write our congressmen or march on the mall, making Syriana the kind of film that demonstrates a lot of passion and anger to no fruitful end but to educate a little tiny bit and, hopefully, inspire someone to pick up THE NEW YORK TIMES now and again.

George Clooney sports a beard and a gut as spook Bob Barnes, sharing a sad little lunch with estranged son Robby (Max Minghella) before being sent on a compromised mission that finds him getting his fingernails pulled out and somehow herniating his neck. He's worried about the fate of a missing bit of U.S. ordnance (bringing up the spectre of the tons of ordnance the U.S. left for the insurgents in Iraq--but Iraq is like the love that dare not speak its name in this film), but his superiors are only interested in him assassinating the reform-minded Arab so that the idiotic, 8th-century Arabs can continue to be controlled by rich Texans with family connections (played again as in Silver City by Chris Cooper). Meanwhile, an Arab kid moves towards strapping himself to said missile while Holiday makes a play for lead-partner status by betraying his mentor to the U.S. Attorney. It's all very cynical and hopeless, but at its heart is Bob's too-late realization that he should've been there more for his son when it mattered--and Woodman's identical realization that with one son left and a hot wife (Amanda Peet, naturally) tending the hearth, maybe his life would be better spent tossing around the football than changing the world.

Syriana is a film with limited appeal for a limited audience. You can praise the flawless, mesmerizing performances of each cast member, and you can say that you appreciate a picture that's angry and wants to talk about it, but Syriana shivers there debrided of topicality, lacking the focus of something like The Insider. The anger seems misdirected at best, railing against the status quo without enough direction, nor weight of evidence, to pose much of a challenge to it one way or another. Without that kind of concentration, you're left with the uncomfortable feeling that you're watching a lot of wealthy people patting themselves on the back in front of and behind the camera. It's possible to view Syriana as post-modern in that way, I guess, in that while everyone involved is sure they're participating in an Important Project, the project itself (even its Prince Nasir subplot is about the unwise betrayal of a father) seems to suggest that the only thing that's actually important is having regular hours and going home to the wife and kids. Though it's not a bad message (in this context, it might be sort of sublime), the big issues that lead you there don't deserve to be reduced to pseudo-activist, pseudo-intellectual background chatter. Originally published: December 14, 2005.