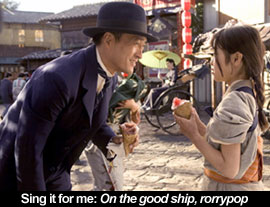 by Walter Chaw The wounds that WWII opened between the Chinese and the Japanese are still fresh. Over the course of a twelve-year occupation of Manchuria by the Japanese regular army, at least nine million Chinese civilians were butchered--and though the Chinese, lacking a unified defense, bear the burden of poor organization, petty in-fighting, and a fair share of mortal Pollyannaism, the Japanese refuse to this day to apologize for what they have officially dismissed as the standard toll collected in conventional warfare. I believe it's this--as opposed to the centuries of racial hatred--that has called down the normally quiescent Chinese activist contingent on the suddenly-thorned head of the Steven Spielberg-produced Memoirs of a Geisha, a film written, directed, and produced by Caucasians based on a book by a white author who was promptly sued by the geisha, Mineko Iwasaki, he interviewed for the book on the grounds that he not only betrayed their confidentiality agreement, but also fabricated the fate of her virginity, which she claims was never never auctioned off in the way that the Arthur Golden novel describes. True or not, it's the sort of thing that would be particularly attractive to a western mind transfixed by the sexy Mystery of the Geisha.

It's not that there's a Chinese reluctance to forgive the Japanese--it's that forgiveness was never asked for. Thus ethnically Chinese actresses accepting parts as Japanese geisha in the service of war profiteers and "heroes" of the occupation of Manchuria strikes many as the worst kind of cultural betrayal. And why wouldn't it? (Compounding frustrations, this is one of those extremely rare war movies set in the Pacific Theater and it manages to neatly sidestep the Japanese occupation.) But there's more to it than that, because the film is a product of an industry notoriously unfriendly to Asian actors who are not clowns or martial artists (or both), and so it feels like yet another slap in the face from people content to lump Asians of every stripe into one group. When you say "they all look alike," I don't think you mean all Chinese people, or all Koreans--I think that you mean all Asians, period; when a film like Memoirs of a Geisha is cast completely with the Asian faces that are the most familiar to American audiences, actual ethnicity be damned and with no regard for the potential shockwaves such decisions will send through a third of the world's population, it just feels like Mickey Rooney upstairs to Audrey Hepburn all over again. And when Chinese actors are schooled in "light Asian-accented English," there's not a distinction that they're speaking with Chinese accents instead of Japanese. Does it matter? Maybe it doesn't. The standard refrain from Caucasian journalists so far is "I think they're overreacting"--which is patronizing, of course, and clearly ignorant, but it speaks, too, to the essential misunderstanding of the completeness of the offense.

While most of the ire from China is being directed at Zhang Ziyi, Gong Li, and Michelle Yeoh (and at what point will we address THE INTERNET MOVIE DATABASE's practice of "helpfully" rearranging Chinese and Korean names so that the surname is sequenced in a west-pleasing way?)--I won't speak for them or the personal paths they took into kimonos and servility. I mean, there's a lot of smugly-located irony in their "selling out" for a film with this kind of subject matter, isn't there? Whatever crosses they have are theirs to bear. Some, like Zhang, have already spoken for themselves in correctly identifying the difficulty any Chinese actor has in breaking into Hollywood. (The choice, as she saw it, was between a career in relative obscurity versus this anomalous shot at the big time.) Yet I feel like I must take into consideration that the film is a Sony Pictures release and that Sony Pictures is, of course, a Japanese company. No sooner have I done so than am I on the horns of another complexity. Racism and xenophobia are spider's nests: kick them over at your peril, you might even find yourself under there. It's a mess, a complex and delicate one involving race, artistic license, gender, and ethics vs. profit. That most will dismiss it as little more than overreaction and inscrutable nonsense about a trifle of a trifle is just license to do it again.

Memoirs of a Geisha might as well be science-fiction, because for all the insight, research, and humanity afforded this project, it comes down to exotic, imaginary creatures flitting about in a fantasy of bellum-Japan--Star Wars' cantina scene stretched to feature-length. This is exactly the tactic, in fact, that the filmmakers (and Golden) would seem to encourge: It's not history, it's that holy grail of the ignorant and callow, Just a Movie (i.e., completely meaningless, impact-less, ephemeral). It doesn't say anything about us as a people just like Birth of a Nation doesn't say anything about America in the first part of the last century, just like Reifenstahl's pictures don't offer up any insights into the Reich, and just like all those celebratory 9/11 videos cobbled together for sale on the streets of Beirut don't say a thing about Lebanon. Okay, then, let's spend review how the film fails on its own merits.

Sayuri (Zhang) is a blue-eyed girl kidnapped, in a soft-sold version of the abduction in Casualties of War, from her parents' fishing hovel and sold to a house whose business it is to train Geisha and introduce them into service as living pieces of art for the gratification of rich businessmen. Evil, drunken, promiscuous, jealous geisha Hatsumomo (Gong Li, a master of these roles) is fearful of Sayuri's future earning potential either because the little girl has blue eyes or because she's read the script and knows that Sayuri is the lead. On the flipside we have Pumpkin (Youki Kudoh, actually Japanese), the meek Geisha apprentice who is posed carefully as Judas in the Passion of the Sayuri. Romance novel stuff happens, the little girl grows up to be a gorgeous Char-girl, and then a fairy godmother in rival Geisha Mameha (Yeoh) materializes in order to turn this pumpkin into a beautifully-appointed coach with all the surrey yen can buy. Sayuri, however, is in love with The Chairman (Ken Watanabe)--a man so powerful and good (he buys her a snow cone) that he only needs a title--and pines after him for years and years in a weird, sort of disgusting, Katie Holmes/Tom Cruise, Soon-Yi/Woody Allen way until she, like Katie and Soon-Yi, gets to sleep with the old (and only getting older) letch she's idolized and romanticized since forever.

It's melodrama at its most overheated (if Fabio were Asian, he'd be in this film). Director Rob Marshall has taken whatever questionable nuance there may have been in Golden's book and transformed it into a glossy picture-book you want to hide under your mattress. Its rags-to-riches by way of slavery and institutionalized rape story is far from heart-warming--maybe it's just not my cup of tea. Yeoh's moment to shine revolves around her barely-repressed jealousy that one of Mameha's long-time customers might have raped pupil Sayuri, thus destroying Sayuri's cherry-price and losing Mameha, a customer who always paid his bills on time. The later revelation that this guy didn't actually rape her (he merely assaulted and molested her) comes as some relief because that means that Sayuri and Mameha can proceed to sell Sayuri's holiest of holies to a disgusting old doctor apparently turned on by tending to knife wounds on supple Geisha thighs. It confuses its message of female empowerment (it is, indeed, one of those pictures that suggests that forms of prostitution are feminism in full flower and practice) with fatalistic moments like those and lines like "what more can we expect, we Geisha?"--ignoring altogether the gangsters with their fingers in every Geisha school at some level during that period. The goal oft-stated is to turn these girls into commodities for trade on an open market, but the goal unstated is to make Sayuri both that object of ornamental Orientalism and a plucky, fast-talking, strong-headed dame from a Thirties screwball comedy.

In a word, Memoirs of a Geisha is icky. Marshall has a flair for big-budget movie-making, which means that, like another Spielberg protégé, Chris Columbus, he's able to make every single shot look ultra-expensive. Sayuri's "coming out" dance on a modern runway complete with fake snow and strobe lights is a marvel of "what the fuck is going on?" quickly swallowed by "wow, lights." (As good an analysis of the film as a whole as any, really.) The men are never judged in any way, save a couple of post-war American businessmen, one of whom is used as the instrument of the fatally compromised Pumpkin's weird revenge subplot that comes from nowhere, goes nowhere, and is wrapped up as neatly and tightly as a tourniquet. This is the cleanest movie about prostitutes (auctioning off your virginity never looked so refreshing) since Butterfield 8, a film so apolitical that its vacuity has allowed all manner of offended special interests to flood in to fill the void. A scene where Sayuri sails the requisite Handkerchief of the Beloved off a cliff a-crash with waves is so very "Madame Butterfly", and I dare say any scene could be captured for use in one of those tacky calendars that line the shelves of your local Far East Center. But pretty pictures only get you so far. While Zhang and company are game, they're not given much to work with in a language that's not their own in a film that, in the final analysis, simply doesn't deserve the amount of attention it's getting for being stupid. A lot of movies are stupid, after all. Originally published: December 9, 2005.