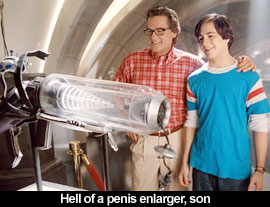 by Walter Chaw A kids movie for the stupid ones and a guys movie for the stupid ones of those, Sky High and Stealth are lowest-common-denominator entertainments that throw sense out the window in favour of clumsy one-liners, bad special effects, and an eye focused keen on demographics and the bottom line, which those demographics promise to fork over on opening weekend. It doesn't matter if they're good, just that they rake in enough moolah before people get a whiff of the noisome rot and ennui wafting on air-conditioned currents out of the friendly neighbourhood cineplex and start staying home again in droves. The dreadfulness of Sky High and Stealth can be measured by the extent to which this nation's timid, gaffed, untrained, dispassionate film critics equivocate in their reviews that it's for kids, that it's an enjoyable film if you check your brain at the door, and/or that it's "finally" the family/action/blockbuster you've been waiting for all summer long.

It's the long, lonely mating call of the mindlessly accepting or the bought-off stooges turning their cute turns of phrases for editors that tend now to demand of their columnists cheerful press releases for films that, by and large, have already spent their budget again on advertising. There's no section of any paper in America where the standards for writing and critical thinking are as low as in the entertainment/lifestyles section--even the sports pages have columns meant to inspire debate and conversation instead of mindless surrender to popular opinion. The reason movies like these get a pass is because no one with a voice is brave enough to call "shenanigans"--and a legion of subscribers (the same "Joe Lunchbox" demographic that dumb movies like this target, as it happens) fall obediently in consensual lockstep. Shudder to think that the bulk of our hate mail comes from people defending the unholy trinity of George Lucas, Ron Howard, and Michael Bay--dull, unimaginative people trained by our culture to abhor a different opinion. I mean, just look at the films. Just look at their mouthpieces.

Understand that I'm not getting on Mike "Surviving Christmas" Mitchell's superhero spoof by way of teen movie Sky High for being socially damaging so much as I'm getting on it for being jejune in every single measurable category. Its mentality is pure "Saved by the Bell" and "Sabrina the Teenage Witch"--in other words, it's extraordinarily low slapstick humour sanitized to the point of nausea, with an affection for camp kitsch so extreme that it's difficult to discern how much of it is self-knowing and how much of it is a result of nobody knowing anything. It's a throwback for Kurt Russell to his Disney Movie of the Week days in terms of screenplay, ethic, and production value, and if Kelly Preston seems right at home, well, that says a lot more about the plastic fantastic Preston than it does about Sky High. Consider the film's world, a place where superheroes are commonplace and send their kids to school at the titular floating institution where they discover powers that make them heroes or relegate them to sidekick status. Not un-clever by any grammar school criteria, it's lamentably shallow as the basis for a feature goes, leading to a film that's basically every single teen formula in the history of teens (homecoming dance date intrigue, parties while the folks are away, old friends abandoned for cooler friends then reconciled, and so on) punctuated with horrible special effects and superhero puns. Worse, Mitchell is as in love with the Dutch angle (the camera canted for no good reason) and the unmotivated pan and zoom as poor, addled Roger Christian, the auteur behind Mr. Preston John Travolta's Battlefield Earth--meaning that while there's little substance in front of the camera, there's somehow less behind it.

Our hero is Will Stronghold (Michael Angarano), just your average ordinary guy hanging out with the loser sidekicks and pining for the lovely Gwen (Mary Elizabeth Winstead) even though true love is right under his nose in the form of awkward pal Layla (Danielle Panabaker). How long will it take Will to realize that Gwen's a bitch and that Layla's his soul mate? Oh, until a minute before Layla is taken as a hostage by the bad guy so that Will can save her and then, in a public place, proclaim his error and ever-lasting devotion. The parents are Captain Stronghold (Russell) and Josie Jetstream (Preston)--the lack of imagination in their naming stinking of a film that should have been made by Charles Band or Lloyd Kaufman. It's mid-Seventies, Saturday afternoon "Land of the Lost" hokum as imagined by Roger Corman but free, almost completely, of fun. In fun's place find lugubrious, slavish devotion to formula that's only temporarily relieved by a cameo from Bruce Campbell as a sadistic gym teacher, Cloris Leachman as the school nurse, and Kid in the Hall Kevin McDonald as wide-eyed Mr. Medulla. Russell attempts a campy exuberance that's brave but brutally out-of-place in a film full of amateurs playing it straight (and Prestons playing it vacuous), leaving the only joy of the piece a soundtrack full of teenyboppers covering all those moldy-oldies from the New Wave (Talking Heads, Til Tuesday, The Cars, The Fixx) '80s. When did I become the fogy? To quote another hale Reagan-era fave, "We close our eyes and the world has turned around again." Amen.

Stealth features Oscar-winner and flavour of the year Jamie Foxx in a token role as a brainless jock in a brainless rah-rah action flick that's suddenly embarrassing for his newfound status as someone you respect instead of another one of those guys you can't remember if they were on "In Living Color". His status as the black man who comes in third behind the white man and the white chick is addressed by what feels for like a scene inserted after the picture wrapped of Foxx's flyboy Henry wooing a Thai honey in a picaresque Asian landscape. What that has to do with a film obsessed with heavy metal and Jessica Biel's topography (the fact that the waterfall/bikini scene from Cocktail is in the middle of Stealth is at once up for conjecture and not surprising in the least) is not so much a mystery as it is one of any number of plot machinations remarkable only for their broad strokes and clunkiness. It's not as homoerotic as Top Gun, then, but it does feature pretty boy Josh Lucas as lead pilot Ben Gannon, point man for an experiment by evil Capt. George Cummings (Sam Shepard) to introduce a robot brain into the body of a state-of-the-art fighter aircraft. Because Kara Wade (Biel) is a girl, she's given the dialogue about collateral damage and the morality of long-range mechanized warfare; because Henry is black, he gets the business end of a mountain when a flying washing machine outsmarts him; and because Rob Cohen is the director of this mess, there are a lot of CGI point-of-view shots of electrical currents going through wires. Soon, lightning strikes EDI (Extreme Deep Intruder) like it does Short Circuit's wacky Number Five--but where Number Five learned about life in the death of a daisy, EDI deals death upon faceless dark-skinned folks with rains of radioactive death.

Loud, computerized action sequences highlight how far we have and haven't come from Firefox, a bomb's-eye view shot reminds the Michael Bay has had a lot of ideological children, and an oddly anti-climactic conclusion grafts on the sentimental détente of another John Badham (after Short Circuit) bit of retro sci-fi chic (War Games). Over it all, of course, hangs the ghost of 2001's murderous HAL 9000. Why the designers of EDI hadn't foreseen the possibility that an airplane might get hit by lightning is beyond me--and the reason for creating an artificial intelligence that is actually smart enough to have terrible taste in music is never discussed. (Both fall under the conundrum of "If you're asking, you're probably too smart to have gone in the first place.") There's a supposed love story among the explosions and the dead spots somewhere, but acting in a film as effects-heavy as this one is akin to doing voice work for animation: long hours of sitting by yourself in a fake cockpit as you scream your lines at nothing while gyros toss you around tends to hinder human tenderness and connection. The only thing that one really leaves Stealth with besides a headache and tinnitus is the disquieting identification of Russia and North Korea as the new Iraq and Afghanistan. Stealth is tech-porn that stops short of massaging technology (good ol' American can-do is still the tonic--see how EDI's personality is eventually transformed into that of a semper fi jarhead) whilst reassuring that American military might is now and evermore the barbed panacea for all the world's ills. The problem isn't that it's stupid and bombastic, it's that Stealth provides stupid and bombastic answers to what ails us: attitude, not execution--epidemic anti-intellectualism masquerading as science-fiction. It's not good when this sort of boisterous lack of introspection infects our newspapers and news programs, certainly--and it's not good when it's in our "popcorn" entertainments, either. Demand more, lest you just keep getting less. Originally published: July 29, 2005.

THE DVD - SKY HIGH
by Bill Chambers At the risk of pegging myself as one of the stupid kids, I have to confess real adoration for this picture. Maybe it's Kurt's affectionate and self-deprecating send-up of superdads (which almost makes up for Dreamer), maybe it's the Hughesian trappings (the '80s soundtrack covers, the stratification that goes on between heroes and sidekicks) and old-school editing style, or maybe it's Danielle Panabaker's alarming resemblance to Beetlejuice-era Winona Ryder; in other words, maybe it locates my Achilles Heels with sad precision. But so far, no movie this year has given me a purer pop high than Sky High. Disney presents the film on DVD in a luscious 2.35:1 anamorphic widescreen transfer*--gone is the excess filtering of their more recent live-action fare, replaced by an unobtrusive, mood-setting mist of grain. Ed Gonzalez over at SLANT noted some digital schmutz on areas of intense colour, but, not for lack of trying, I couldn't get our review copy to produce this artifact. For a movie with such an exuberant production design, Sky High actually sports a fairly tame soundmix, and the DD 5.1 audio on this disc reproduces the theatrical experience with fidelity. Bruce "Sonic Boom" Campbell's bellows utilize all six channels, but you pretty much have to crank this puppy past reference level to get the full effect.

Extras are disposable but moderately enjoyable. An "Alternate Opening" (3 mins.) showcases the flashback to the Commander and Jet Stream's takedown of Royal Pain in its entirety, while "Super Bloopers" (4 mins.) features the hilarious sight of Michael Angarano high-fiving a bemused Panabaker after their kissing scene. Director Mike Mitchell and producer Andrew Gunn mock this stupendously immature affectation in "Welcome to Sky High" (15 mins.), which, unlike the revelatory companion featurette "Breaking Down Walls: The Stunts of Sky High" (7 mins.), hardly qualifies as a making-of, although it's interesting to learn that the heroes and sidekicks split into two camps off-camera as well. The video for Bowling for Soup's sanitized "Melt With You" cover (in 5.1, no less) plus sneak peeks at Lady and the Tramp, Glory Road, The Greatest Game Ever Played, Once Upon a Mattress, The Proud Family Movie, "Raven's House Party", Toy Story 2, and "Kim Possible" round out the disc. The first three trailers automatically cue up prior to the main menu. Originally published: November 28, 2005.