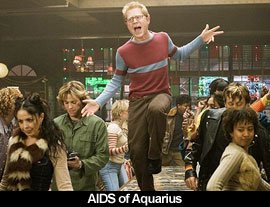 by Walter Chaw On the list of painful experiences, the modern Broadway musical ranks fairly high, so it's fair to wonder how an adaptation of Rent--by Chris Columbus, of all people--could have struck anyone as a bright idea. In all honesty, though, pretending not to understand the reasoning behind a project like this is disingenuous snobbery, because when something this terrible has proven to be that popularly galvanizing, it's only a matter of time, really, before Hollywood moneymen come calling with dollar signs in their eyes and memories of Chicago dancing in their heads. (I can only assume that that's also the reason the legendarily awful Phantom of the Opera got a greenlight with Joel Schumacher at the helm--and that Matthew Broderick and Nathan Lane's stupendously popular (and similarly awful--film and play both) The Producers is set to bow this Christmas.) But with Rent, in place of a name like Webber or Mel Brooks to drive its inexplicable success, you find a genuine middlebrow cause célèbre, loaded well beyond safe with Message carried on the backs of a thundering stable of Alphabet City freaks and caricatures of freaks, each of them wilting from a romantic wasting disease (AIDS, naturally, or 'disenchantment' in place of source La Boheme's 'consumption')--the same one, not-so-incidentally, that claimed creator Jonathan Larson a few tragic months before Rent's triumphant debut on the Great White Way.

The story isn't important, but it has something to do with a roundelay romantic intrigue involving wacky pairs of mismatched couples. There's a certain self-obsession about the film, which knows its audience is composed entirely of people who've seen the stage production and thus dispenses with any niceties of character introduction or sense. Almost as soon as we meet Tom Collins (Jesse L. Martin), the joke-unfunny being that he's named after a drink, I guess, he's mugged by a trio of street thugs--the point of which to demonstrate how lousy is the neighbourhood in which our heroes live (our heroes consisting of '80s rocker Roger (Adam Pascal, the spitting image of Jeff "Kenickie" Conaway) and his platonic roommate, Nice Jewish Boy Mark (Anthony Rapp)), and to introduce Angel (Wilson Heredia), who comes to his (emotional) rescue. Next day, the boys are introduced to Collins's new beard with neither curiosity nor, really, introduction. The relationship is assumed, see, or rather presumed, and because every audience will be familiar with the text, there's no need to flesh things out for the uninitiated. Better, when stripper-with-a-heart-of-gold Mimi (Rosario Dawson) appears later to woo soulful, Winger-esque Kenickie, she walks these same mean streets in a G-string and leather jacket without a whisper of the kind of danger that befell 6'3" muscular black man Collins. Seems ugliness is selective in Rent and in short supply besides, as Columbus (like mentor Steven Spielberg, like compatriot Ron Howard) never met an ugly subject he couldn't polish into an antiseptic sheen.

I didn't understand, either, why Kenickie's friends determinedly foist on him a heroin-addicted stripper ("She'd be great for you!"), especially when we're given a repugnant backstory wherein he gets infected with HIV by his ex-/dead girlfriend, another intravenous drug user. Must be that they know they're characters in an allegory for some kind of unearned soaper redemption. It's hard for me to feel terribly respectful of something that steals throwaway gags from Weird Al Yankovic's 1984 song for Johnny Dangerously ("If money can't buy happiness, I guess I'll have to rent it!") as a major theme--and to my untrained musical-theatre ears, the songs in Rent are maudlin, atonal, and arrhythmic. I liked Chicago pretty well and appreciated the way it integrated its musical elements with the rest of its story. Too, I really liked Moulin Rouge! for its breathlessness. I'm not completely resistant to the musical new wave is what I'm saying, but I don't like things that are trite, and if it's not the lyrics, it's the sentiments of the Rent book that set my teeth on edge. Not helping, probably, is the dumbest romantic resurrection since the one in Far and Away--tacked on to an interminable (really, this thing is endless) running time bloated by an Elizabethtown road trip and, brace yourselves, a documentary film about the principals that just makes you wanna cry, for all the wrong reasons.

None of it works on film. I'm willing to give this shit the benefit of the doubt on stage where the vibe is different, the acting techniques are different, and the whole experience is probably more conducive in general to inspiration. But this kind of charisma feels like mania in a movie theatre. The messages are pounded home and, for some reason, everyone with AIDS is elevated to some kind of holy pantheon therein. (THE ONION skewers this tendency for certain kinds of paternalistic garbage to nominate for sainthood anyone with a disability or disease with typical precision by having someone comment, when asked about Christopher Reeve, "I wish I had the courage to get crippled like that.") Rent's songs are juvenile and grating, its politics are obvious and unchallenged, and its characters are broad stereotypes engaged in shallow versions of complex issues. On the bright side: after Dawson's extended striptease (and her identical turns in Sin City and Alexander), I've now officially spent more time contemplating her crotch than my own. And after a few dips in Pascal's power ballads, I've been miraculously cured of my "Pornograffiti" CD. In the final analysis, thank you, Rent. Originally published: November 23, 2005.