by Bill Chambers "Leave It To Beaver" was the first TV series to show a toilet. That sort of illustrates a point I want to make that while it may be an idealized portrait of the nuclear family, it's not a lie. Indeed, there's a touch of neo-realism in the show's emphasis on the bathroom, on laundry, on haircuts and making the bed. It's the only series I can think of where the characters are seen grooming themselves on a regular basis, and this almost blithe disregard for fourth-wall etiquette extends to not only frank discussions of hygiene, money, faith, and morality, but also an aesthetic that eventually supports 360º blocking. You won't, in other words, see the standard set-up of four people all sitting on the same side of the dinner table, except in the earliest episodes.

Tim Lucas wrote in one of his VIDEO WATCHDOG editorials that he found himself watching an awful lot of "Leave It To Beaver" in the wake of 9/11. I did, too, though I can't say I put 2 and 2 together before reading Lucas's article. In general, it makes sense that one would turn to Fifties television for comfort food in times of terror, as the medium itself started out as a postwar salve and grew to chart a nation on the mend. This is what Pleasantville got right: Disenfranchised teenager David seeks refuge in the Platonic ideal of suburban life as determined by a Golden-Age sitcom. (Even the working-class escapades of "The Honeymooners" were uplifting in the sense that you could see the problems of the proletariat having dwindled in scope.) Still, I think "Leave It To Beaver" commiserates with the shell-shocked viewer on a higher plane, its verisimilitude transcending escapism; it doesn't feel alien, it feels like a memory, and so its compassion seems like something we can claw our way back to.

The many reviews of Pleasantville that namedropped "Leave It To Beaver" are in fact guilty of shorthand. If the chiaroscuro grotesquery of the show-within-the-movie satirizes anything effectively, it's hygiene cinema--the appeal of the "Pleasantville" universe becomes purely ironic once David and his sister Jennifer are zapped into it, which actually works against the piece by suggesting that David is not a romantic, but just another detached hipster. As far as I'm concerned, Pleasantville's denouncement of Puritanism forgives or makes a necessary evil of its allegorical hyperbole (what is George W. Bush with his unsuccessful abstinence program but the mayor of Pleasantville?), yet, for purposes of this discussion, the picture unquestionably erects straw men in painting the denizens of Pleasantville--rather, "Pleasantville"--as anti-intellectual ciphers and further distorting their humanity through wide low angles, unnatural blocking, and self-conscious line-readings. There isn't a sitcom on the air today with the humanity of "Leave It To Beaver", let alone its moral or visual sophistication. Then again, there probably wasn't one back then, either--it's truly one-of-a-kind.

Eager to duplicate the artistic success of their Oscar-nominated Charlton Heston vehicle The Private War of Major Benson, an adult-skewing romantic comedy populated mostly with kids, co-creators Joe Connelly and Bob Mosher cooked up "Wally and Beaver", whose title subtly announced their subversive intent to centre a family sitcom around the children instead of the parents. (It was later renamed to sound less like one of Disney's nature programs.) To be sure, the show was partly a response to "Father Knows Best" and its ilk, but the pair's desire to knock the pulpit out from under the righteous patriarchy stemmed less from hostility than from their humility as real-world dads. Mining their personal lives for dialogue and situations, Connelly and Mosher brought observant humour and a sometimes-staggering emotional intelligence to their teleplays that continues to stand the test of time. 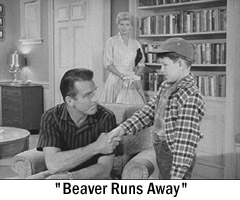 Consider "Beaver Runs Away," one of the first season's more complex--and certainly more iconic--episodes. (Flashbacks to it, in conjunction with the then-recent death of Hugh Beaumont, lend melancholy to the 1983 telefilm Still the Beaver, which really has nothing else to recommend it. (It is to "Leave It To Beaver" as the Ewok TV movies are to the Star Wars trilogy.)) While Ward (Beaumont) and Wally (Tony Dow) are at the hardware store, Beav's portly pal Larry Mondello (the great Rusty Stevens) materializes and catches Beaver (Jerry Mathers) pretending to use the power drill. No sooner does Larry talk Beaver into letting him use it for real than are the Cleavers left with two holes in the wall of their garage. When Ward will have none of Beaver holding Larry accountable1, an unusually-recalcitrant Beaver declares that he's leaving home. Because Ward doesn't call his bluff at the moment of truth, Beaver actually walks out the door--thus dethroning Ward from the catbird seat by sending June (Barbara Billingsley) into hysterics.

What follows first is a noir-ish scene wherein Beaver, sitting in the dark across the street from his house, projects belligerent thoughts at his father in voiceover (a device I don't think was ever used again), then a heart-to-heart between Wally and Ward in which the former gently criticizes the latter's decision to let Beaver go. "What else could I do? I couldn't run after him, beg him to come back, let him win," Ward protests. "Gee, Dad, I don't think he wants to win," Wally says. "I just think he wants to be able to come back without lookin' like a creep." Once June has finally retrieved Beaver from the Mondellos, Ward acknowledges that his own father didn't talk him out of running away from home as a boy and he forgot how lousy it made him feel (through Ward, "Leave It To Beaver" is haunted by spectres of child abuse, a big reason why I've never doubted the sincerity of its hope for better tomorrows), and he and Beaver share a bittersweet goodnight handshake. 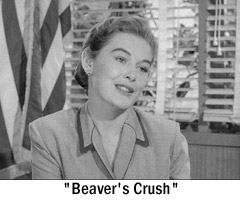 In the similarly resonant "Beaver's Crush," Beaver becomes hopelessly infatuated with his teacher, Miss Canfield--and with naughty-librarian-type Diane Brewster playing her, who can blame him? Long story short, he tells her he wants to marry her, she tenderly shoots him down, and the episode ends with Beaver asking Wally if he ever got over the crush he had on a much older woman. "You promise not to tell anybody?" Wally asks. Beaver promises. "No, Beaver, I never got over her," Wally confides. Although there's little in the way of an overriding continuity to "Leave It To Beaver", individual instalments are so meticulously, classically structured2 that their flawless didacticism often overshadows their healthy ambivalence towards the ultimate benefit of learning a life lesson.

THE DVD
"Leave It To Beaver: The Complete First Season" arrives on DVD from Universal in gift-set and standalone editions. I'm kinda bummed that we weren't sent the gift set because it comes in a coveted "Leave It To Beaver" lunchbox, but since that and a photo scrapbook are its only frills, it's not as though we're missing out on anything vital. The season's 39 episodes plus the bonus pilot (see sidebar) are spread across three double-sided, dual-layered discs, approximately six per side. As for A/V quality, while the show looks grainier here than it does in syndication, the source materials are in excellent condition and presented (in airdate order) uncut, up to and including the rarely-broadcast prologue teasers; audio is Dolby 2.0 mono and offers no nasty surprises. Unless you count the ubiquitous text-based "episode list" or the studio propaganda that opens the first platter, there is zip in the way of extras. With any luck, Universal will reach out to surviving cast and crew and put together some interesting supplementary material for subsequent seasons. I myself look forward to expanding this discussion as future sets arrive. Originally published: November 21, 2005.

1. This issue arises again in season two's "The Pipe," and Ward is quick to congratulate Beaver for discounting Larry's influence in his decision to try smoking. return

2. Robert Zemeckis has championed the show as a teaching tool for young screenwriters, while the roots of John Hughes's sensational Uncle Buck are traceable to the fourth-season episode "Uncle Billy" and its sixth-season companion piece, "Uncle Billy's Visit." return