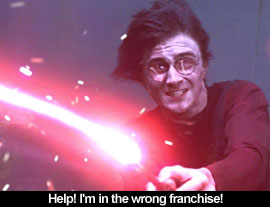 by Walter Chaw Just as Harry and the other arms of his archetypal triangle stumbled into adolescence with aplomb and poetry under the guidance of Alfonso Cuarón in Harry Potter and the Prisoner of Azkaban, they awkward-and-gangly their way into a holding pattern in Mike Newell's puttering Harry Potter and the Goblet of Fire (hereafter Harry Potter 4). It looks grungy and it lacks grace: the moments meant to inspire are tired and the moments meant to edify are portentous and unbearably drawn-out. There's not a lot here for the non-fanatic, with screenwriter Steve Kloves failing the material for the first time and Newell showing himself to be exactly the kind of director who would make slick, protracted nothings like Mona Lisa Smile and Pushing Tin. The Newell film Harry Potter 4 most resembles, however, is Four Weddings and a Funeral (his conduit to the big time and, consequently, the one he's most likely to cannibalize when handed the golden ticket), in that this third sequel tries to worry itself about the trials of youngsters falling in puppy love, going to their first formals, and learning that there are such things in the world as death and taxes. A noble pursuit, chasing characters as they grow from chapter to chapter, from innocence to churlishness to experience (we presume)--but for me, at least, Harry Potter 4 is the first wholly dispensable instalment, repeating the best parts of Cuarón's film and adding to the conversation only the disturbing resurrection of archenemy Voldemort.

With a few particularly disturbing images of self-mutilation and what seems an awful lot like a satanic ritual in the middle of a graveyard the crux of its unpleasantness, Harry Potter 4 is as dark as advertised. Yet throughout, there's a more aggravated sense of banality--a feeling that Newell equates adolescent angst with ugliness and is incapable or unwilling to offer compensatory magic for all the humiliations and trials of growing up. The CGI blossoms in the picture are commensurately ugly; Harry battling a dragon not only defeats its own internal logic (why doesn't the beast snatch Harry off a precarious perch mid-flight instead of waddling around on a rooftop?) but betrays again that lack of allegorical complexity. One could easily imagine Harry battling serpents as being tied to some psychosexual weightiness in Cuarón's hands--in Newell's, it's just a really expensive sequence that neither quickens the pulse nor stimulates the mind. It takes a genuinely dull blade not to find allegory in an action scene involving kids taking a dip into a murky lake teeming with merfolk and the drowned bodies of friends.

For the uninitiated, Harry (Daniel Radcliffe) is in his fourth year at Hogwart's boarding school, where British children gifted with magic learn to channel their skills in the arts of wizardry. His best pals are Ron (Rupert Grint) and Hermione (Emma Watson), the former the poor son of a government official, the latter the daughter of "muggles"--non-magical mortals, thus condemning Hermione to the derogatory "mudblood" epithet and, in more capable hands than Newell's, the kind of class and bullying subplots I've always welcomed in J.K. Rowling's source novels. The problem with Harry Potter 4 is that it's free of subtext for the most part, content to worry itself with sappy love plots punctuated now and then by special effects set-pieces that revert to the first film's tendency to stop the action to allow the cast and the audience to gape, slack-jawed, at the spectacle. Bad form to be so impressed with yourself that all you do is draw attention to your antics. More subtle is the sensation that many of the scenes pull up short either because they're badly-edited or incomplete. Consider the prologue at a "World Cup of Quidditch," during which nothing happens in as loud a way as possible until the conclusion, wherein Klan-hooded baddies rain fire on the suddenly, inexplicably-helpless wizards. It's horribly directed, barely scripted, and if it's meant to provide the film its bad omen, it does so in a way unintended.

There's no rhythm to the piece and, for the first time, the trio of kid actors at the picture's centre irritated me. Asked to engage in improvisational exercises and acting classes by Newell, the kids lack freshness here--the only thing in the past forgiving their lack of actual chops. Their shortcomings are exacerbated--as opposed to plastered over, as they have been in the past--by the supporting cast of the UK's best and brightest, a harsh relief that probably explains why for long stretches it appears as though there are two films going on: one with actors and one with children pretending to be actors. Newcomers include Brendan Gleeson's grotesque MadEye Moody, Miranda Richardson's gossip columnist Rita Skeeter, and Ralph Fiennes's reptilian Voldemort. (Fiennes is resurrected after a fashion in this film as well, playing his first villain with a spark of life since Schindler's List.) Each is as good as to be expected and each is abandoned in the middle of all that aimless, lugubrious mess. Harry Potter 4 is three hours of exposition, its first real conflict coming in its last ten minutes and the whole of it stinking of equivocation, desperation, and a particular lack of vision. Maybe it has something to do with trying to condense a mammoth book into a film of reasonable length, or maybe this is the kind of franchise that separates the men from the boys. Originally published: November 18, 2005.