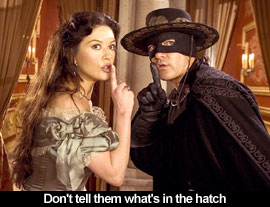 by Walter Chaw It's Amblin Entertainment's version of Once Upon a Time in the West, which only serves as a reminder that it's been too long since the last time you saw Once Upon a Time in the West. Martin Campbell's dedicatedly underwhelming The Legend of Zorro goes through the motions of knock-off action sequels like this with a tired fidelity and--until a semi-sadistic conclusion--a squeamishness about enemy casualties that smacks of that peculiar morality for which there's ever an acceptable way to portray mindless carnage to the kiddie set. I'm not saying your moppets should be shielded from the ugliness of the world, I'm saying that should they witness someone getting pushed off a thirty-foot tower into a cactus patch with the tip of a sword, they ought not be shielded from the consequences. By the umpteenth time Campbell uses the classic "A-Team" tactic of showing the bad guys crawling away from a scene of mayhem in a slow-motion, "Hey, no harm done" shot, you don't feel comforted by the innocuousness of the thing so much as coddled for being a ninny who doesn't understand that more harm's done in assuring your kids that frenetic swordplay never results in somebody getting hurt.

This doesn't stop the bad guys from slaughtering innocents, of course--shooting poor sharecroppers in the back and capping well-meaning monks after endangering babies in burning barns, their various malfeasances buying indulgence for the eye-for-an-eye of its conclusion when the good guys finally uncork some medieval justice of their own. Consider the way the chief henchman (flint-eyed Nick Chinlund) is dispatched via messy (and crowd-pleasing!) decapitation--or how archvillain Armand (so-that's-what-happened-to Rufus Sewell) is strapped to the front of a train while we watch, dumbstruck, his body slam into a barricade. My favourite, though, is Mrs. Zorro (Catherine Zeta-Jones) shoving a bottle of nitro-glycerine into a guy's pants and using him as a grenade against a group of Confederate soldiers (the bad guys, in case you're keeping score, are Frenchmen and Southerners). All this in what's essentially a good, old-fashioned fruit-cart movie where one is inevitably overturned in a foreign bazaar while, all the while, a collection of bad guys no more threatening than the pirates from Swiss Family Robinson caper about, getting flaming pokers up their asses. There are almost as many reaction shots for Zorro's horse as there are for Mrs. Zorro (thus handily-establishing the pecking order of the flick--best not to confuse the kiddies), and the plot, what there is of it, seems to have something to do with life, liberty, and the pursuit of happiness.

Best to trace the moment The Legend of Zorro goes astray to the conceptual faux-pas that sees Johnston McCulley's pulp dandy Don Diego (Antonio Banderas), who dons S&M gear to transform into rakish, suddenly-masculine champion of the little people, re-imagined as a romantic neo-conservative foil with the regular measure of confused, misdirected manliness. Once there's no discernible difference between this Clark Kent and his Superman, also democratized is any sense of the underlying sexual taboo of the figure: he who deals in branding, poking, taunting, and scarification rituals. Douglas Fairbanks, Tyrone Power, Guy Williams, George Hamilton--each demonstrated a certain understanding of the danger represented by the figure's habits, chosen alter ego, and costume (Hamilton's spoof, of course, giving full measure to "the gay blade" portion of the proceedings). Alas, no longer, as the Banderas Zorro is some kind of arch republican nationalist who deals in violence without dealing with the messy consequences of that violence, saving America from the "ass-frogs" and the secessionists (armed with weapons of mass destruction) as he battles to preserve the nuclear family with the help of the religious right.

The Legend of Zorro is ideologically pandering, for sure, but the reason it's bad has a lot more to do with its bloated running time and its uproariously bad script, direction, and performances. It's Bad Accent Theater, with Welsh Zeta-Jones trying on ill-fitting Spanish, English Sewell trying on ill-fitting French, and Spaniard Banderas trying on ill-fitting verbal communication. The action sequences are hard to see and lack perspective, Campbell pauses repeatedly to provide Zorro and his horse iconic poster tableaux, and for as bad as the allegedly-exciting stuff is, worse is the allegedly-witty repartee engaged in by actors either hamstrung by their accents or rhythmically incapable under the best of circumstances. With all that riding against it, I'd like to say that I found the picture repugnant, but the truth is that I had no feeling whatsoever about the film except that I imagined I could feel my life siphoning out of me as this masterpiece entered its third hour. If not for the queasy fascination of a couple of soul-kisses shared by Zorro and Mrs. Zorro that pushed the line for me between "hot" and medically-invasive, there would hardly be anything to discuss. Originally published: October 8, 2005.