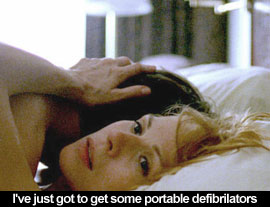 by Walter Chaw Muscovite Laura (Dina Korzun) lives with her boyfriend, legendary music producer Alan James (Rip Torn), in Memphis. He's twice her age, they have a young son together, and when Alan's grown son Michael (Darren E. Burrows) comes home to visit, Laura begins to realize that although she's living her dream of prosperity, she's a stranger in a strange land, divorced from her ambitions and beginning to cramp from the positions her little deceptions demand of her. She's defined almost entirely by her sometime- lover and keeper--at restaurants, people ask her if Mr. James will be showing up later, and when an impulse has her shopping for Michael, she's asked if she's picking something up for Mr. James. Most films that share a set-up with Forty Shades of Blue are about how it is that the Alans of the world can have everything but be incapable of maintaining a marriage, muddying the relationships with their children with the same brusque inconsiderateness. Just as likely is the film about the vagabond son trying to build a bridge back to his larger-than-life father--the chiseller trophy wife as background decoration and occasional plot lubricant.

When Alan abandons Laura at a party, for instance, to dally with a groupie on the same night he receives a lifetime-achievement award, we presume that the camera will stay with this dalliance and proceed to a confrontation as he stumbles home hours later. What happens instead are long quiet moments spent with Laura's humiliation, with how she gets home, and finally with how Michael misunderstands what he witnesses through a crack in the guest-room door. As the film goes on and the conversations take on the awkward rhythms--the ebbs and flows--of unprepared speeches about unexamined emotions, Forty Shades of Blue's silence becomes increasingly menacing, like a piano wire stretched to its breaking point and then plucked once, twice. Against all expectation, the picture evolves into something like an emotional thriller: an exquisite miniature torture device that draws the line taut between Laura's awakening and the moment she acts on it. A scene late in the film at an outdoor gathering that sees Alan making a grand pronouncement finds director Ira Sachs following Laura as she contorts herself into a figure that's almost grotesque in movement and posture. One way to read the title is as a measurement of fathoms as Laura sinks--and by this point in the picture, the pressure is starting to crush her.

Paced with a patient, European sensibility and home to a trio of the year's best performances (from Torn, Korzun, and Burrows), Forty Shades of Blue joins Junebug among recent Sundance sensations that actually have some substance to back up the hype surrounding them. Moreover, it and Junebug are explorations of the stigmas attached to the Deep South by a mainstream film industry fond of pigeonholes and shorthand--intimate familial deconstructions, low-simmering melodramas that locate the humanity underneath the cornpone and the turbulence underscoring any idea of Americana. Its complexity is in a character stranded outside and yearning, like a Wilder antihero, to access a closed community, drawn to it by the promise of money, sex, and status--only to discover that the sacrifice is too great. But Laura's entrée into Memphis upper-crust has happened before the film opens, meaning Forty Shades of Blue starts at the end, as it were, and represents in its diving bell trajectory a short, painful diary of dislocation, alienation, and the lie of the American dream. There's a scene of failed sex where Laura manufactures an excuse with inhuman precision--Sachs frames it so that her pain is isolated, so that her realization that all she has is a gilded cage and the fog of her practised lies is thrown into focus, even as her mouth goes through the motions of her deception. There are other scenes to point to (a moment in a nightclub where a gang of revellers dance in insensate lockstep in particular), but the aggregate is the thing; Forty Shades of Blue, for all its cinephilia and structure, is as messy and exhilarating as life. Originally published: October 26, 2005.