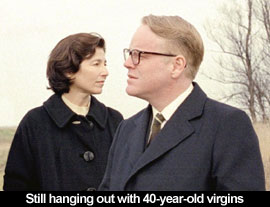 by Walter Chaw You hear him before you see him: Truman Capote (Philip Seymour Hoffman), raconteur, socialite, showman, standing at the centre of the kind of swinging party immortalized in the glossy, offensive film version of his Breakfast at Tiffany's. He's telling a story in a claustrophobic storm of admirers, his reedy, almost-falsetto voice broken now and again by his wheezing, self-conscious laugh. He's flirting with his own persona, I think (Hoffman, not Capote), and the tiny moments I'm able to see through the barrage of misdirection thrown up by screenwriter Dan Futterman and director Bennett Miller (all three old friends--the film plays smug like an exclusive reunion) to strike at the heart of Hoffman's own situation as a sensitive soul trapped in the body of a second fiddle (Kevin Smith syndrome--or, more flatteringly, Charles Laughton), are the moments Capote means something to me beyond another exhumation of the Clutter Family murders already chronicled (and exploited twice already by Capote's In Cold Blood and Richard Brooks's magnificent film treatment of the same) and mythologized. It's as Americana as Grant Wood, marking this tiny Kansas landscape with the same brush as Ed Gein's Wisconsin--and making Capote sexy in a ghoulish way when it fails to be sexy in a revelatory way.

In truth, I don't know that there's more to learn about Capote's compromised position in providing counsel (and personal counselling) for murderers Perry Smith (Clifton Collins, Jr.) and Richard Hickock (Mark Pellegrino), and so Capote falls out along the same lines as George Clooney's Good Night, and Good Luck., with David Strathairn's ventriloquism of Edward R. Murrow just the less showy version of Hoffman's performance here. Neither provides any more or less insight into the interior lives of legendary public figures, but one of the films, Clooney's, at least seems interested in pounding the pulpit of a modern ill with venerable phantoms. Indeed, Capote has already more or less told us how much he sold his soul to the gallows by counting on the pairs' execution so that he his book could have a period instead of a question mark. So what Capote must actually be about is Hoffman, an actor's-actor (some cry "ham," I don't), deciding to take--after a much-admired independent career (Owning Mahowny, Love Liza, Boogie Nights) and a fairly loathed popular one (Along Came Polly, Red Dragon)--a role that would hew close to the kind of personal foibles that could find Hoffman lured into bad choices--and good ones--by a close circle of trusted friends and slick admirers.

By the end of his career, I know that Charles Laughton had been reduced to his own Quasimodo figure, patted on the head for being something of a hambone while peer Laurence Olivier made off with the mantle of romantic leading man. But there was always something wounded about Laughton--the thought that in any company, he was the smartest person in the room, and that you couldn't hate him without his knowing it. (Moreover, without his sympathizing with you.) His stillness as Bligh, his self-loathing as Henry VIII--that element of the ineffability of genius trapped in the ugly amber of too much flesh here and there, and then a nose too round, and then lips too rubbery... I can only think there's something of that eternal footman Billy Wilder so wanted to capture before the great man passed too far (like Orson Welles, himself fond of disguise, did) into self-parody and comfort with subsuming his prodigious gifts with his gayness: running the joke, as it were, to soften the barb of it. So the comparison I'm suggesting is that Hoffman is heading down a road here, declaring often that Capote sapped too much of his strength and that he's looking to the brainless refuge of Mission: Impossible III (and old pal Tom Cruise) to restore himself. This consummate actor, yes, this man whose serious peers fall over themselves to describe in near-mythic tones, begging to be considered among his popular friends and hoping against hope that, like Laughton, he gets one statue for his trouble before letting himself off the cross.

And Capote is the most likely vessel to ferry him over to that plastic Promised Land. There's a moment in the middle where Capote lies to a little girl--well, he lies in that the reason he tells her is not the reason she thinks--by confessing that people often draw a great deal of conclusions about him by how he looks and sounds, and that those conclusions are almost always wrong. It's a great moment in a dedicatedly mediocre film because Hoffman is essentially lying to us through his performance: claiming to be honouring Capote but really offering up himself for consideration as a creature misunderstood for his courage and inevitably (and repeatedly) undone for his need that his intelligence and sensitivity be recognized in an industry notorious for its abuse of them. As for the rest, Catherine Keener (the distaff Hoffman, perhaps) is misused badly as Capote's façade of social acceptability, one-time author Harper Lee, who weighs in with an embarrassing stink-eye and pat pronouncements ("Face it, Truman, you wanted them to die!") that serve as bookmarks for Futterman, trying to keep his head above the story's choppy waters. Director Miller doesn't fare much better, cribbing from Brooks criminally and relying on garbage like handheld camera and "Dragnet"-style editing. Capote isn't any good, but Hoffman is extraordinarily naked in it; if it's the last time we see him like this, at least he's told us why. Originally published: October 21, 2005.