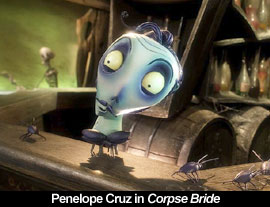 by Walter Chaw A self-contained, melancholic, dulcet little ode to love and sacrifice, Tim Burton's stop-motion Corpse Bride is also a sly stab at class systems, a knowing tribute to both the Hammer horror run and the Universal monster tradition, and another of Burton's evocations of German Expressionism. As fairy tale, it rivals his Edward Scissorhands, as underworld fantasia, his Beetlejuice, and as classic studio-bound horror, his Sleepy Hollow--in many ways, in fact, Burton's return to the stop-motion of his breakthrough short Vincent (and his co-produced The Nightmare Before Christmas) feels like a figurative homecoming to the technique that suits him best. William Blake described an "infernal method" in his theory of creation wherein the artist touched every page of every print of his work to infuse it, ineffably, with the hand of its creator, and so stop-motion, with every movement manipulated painstakingly by the human hand, is infused with a Romanticist's idea of (possibly Satanic) vigor. It's animation that gives the term its "soul"--there's something vital about Corpse Bride that has nothing to do with its story, and watching it, you come to the realization that the reason so much of Burton's work feels airless or dated (or that his stars are so perverse) is that his way with puppets translates only uneasily to his way with actors.

Victor (voiced by Johnny Depp) and Victoria (Emily Watson)--their names more a reference, I like to think, to Ed Wood's Glen or Glenda than to the eponymous Blake Edwards picture--are pawns in an arranged marriage, with Victor's nouveau riche fishmonger parents looking for a class boost through Victoria's old money mavens, who, finding their coffers empty, hope to replenish themselves financially at the proverbial well. Nervous and awkward, Victor woos Victoria with a haunted little tune played on a piano (brand? Harryhausen, natch), the first of a running theme in the film of music in general, the piano in particular, as the means by which a shadow touches another shadow's hand. During a disastrous rehearsal presided over by a stentorian bishop (Christopher Lee), a rattled Victor flees to the woods to rehearse his vows and, in so doing, inadvertently marries the corpse (Helena Bonham Carter) of a wronged lover, only to be whisked away to the underworld without much ceremony. A well-crafted musical, an imaginative macabre fantasy, and a subtle, well-observed comedy (though I did wish that a maggot (Enn Reitel) with Peter Lorre's voice whistled "In the Hall of the Mountain King," just once), Corpse Bride is about love and loyalty--the importance of vows and the eternity of words. Interesting that one of the most visually beautiful films of the year is at its essence a picture about promises.

Without an ounce of fat on its skeletal frame, Corpse Bride speaks volumes through every detail of its sets and character designs. Victor is Ichabod Crane is Victor Frankenstein, while The Bride (her name is "Emily," but she's rarely referred to as such), clad in moldering bridal silks, is a magnification of James Whale's disquieting image of a creature most monstrous for her sexuality. There seem a multitude of avenues through which to deconstruct the picture, if not class then gender, if not from a film geek perspective then through a technical appreciation--but at its heart, the film is a visceral experience. It opens on a butterfly and closes on a swarm of them, the message clear that there will be transformations--yet it's trickier than that because the butterfly in the beginning is being drawn while imprisoned in a bell jar, and the butterflies at the end evoke some sort of spiritual metamorphosis. Corpse Bride is an instant classic, a Charles Addams comic come to life that substitutes the bluebirds dressing Sleeping Beauty with black widows patching Victor's suit. Evocative, lovely, svelte, and sexy; there's a line that goes "Although I'm dead, it seems I still have tears to shed"--a sentiment potentially echoed by audiences flogged into apathy by the first three quarters of 2005. Filled with such brilliant reinventions as a sequence that disinters Ub Iwerks's The Skeleton Dance and gives it a bright new anxiety, the picture is primed for what looks to be a fall season good enough to balance the nondescript pudding of the rest. Originally published: September 16, 2005.