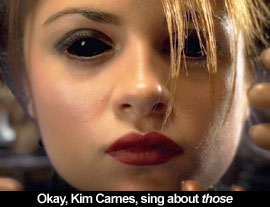 by Walter Chaw Neil Gaiman and Dave McKean are responsible, between the two of them, for one of the seminal works of fiction from the 1990s: a run of comics called "The Sandman" (the success of which moved the World Fantasy Awards to forbid the comic medium from again winning that prize) that proposed a new mythological pantheon, "Endless," to hold sway over the vicissitudes of the world's belief systems. For as long as it lasted, it was an astonishing demonstration of post-mod pop art; with Gaiman writing the text and McKean providing the cover art, the two would collaborate on stand-alone series (like "Violent Cases" and a short run of "Miracle Man"), children's books (Mr. Punch and The Day I Swapped My Dad For Two Goldfish), and now a feature film and illustrated screenplay, Mirrormask, which finds Gaiman scripting and McKean behind the camera. I wish I could report that the results are more than murky, derivative, and hard to see. Taking place primarily in a digitally-created environment (à la Sky Captain and the World of Tomorrow), it looks, unfortunately, a lot like it was shot on last-generation digital video--even the non-fantasy portions of Mirrormask deliver the kind of grimy, ugly picture that Robert Rodriguez makes with his children. With a film version of "The Sandman" languishing in near-permanent hiatus, it's a shame that this first cinematic product from two of that project's major players is such a disappointment.

Helena (Stephanie Leonides) is going through puberty. Her parents (Rob Brydon and Gina McKee) are owners of a small, Cirque de Soleil-like circus, and on the night of just another performance, mother Joanne is rushed to hospital with a sudden illness. As Joanne goes under the knife for her unknown malady (and dad is hounded by creditors), Helena, stricken with guilt for having had an adolescent fit with her mother moments prior to the show, imagines herself--in the proud tradition of pubescent girls in fantasy scenarios (The Wizard of Oz, Alice in Wonderland, Labyrinth, and, most of all, Bernard Rose's Paperhouse)--transported into a projection of her unconscious on the arm of her own Virgil, the masked Valentine (Jason Barry). Episodes set in a vast library, heated conclaves betwixt menageries of fanciful beasts, lots of cats, and handfuls of semi-arcane shorthand puerility identify it as Gaiman's work, while the storyline (lifted almost whole from Stephen King's and Peter Straub's The Talisman, with a nod to Clive Barker's Weaveworld) involves, of course, the fate of a world and the rescue from suspended animation (naturally) of a queen who suspiciously resembles our heroine's mother.

It's obvious and, save a few vaguely disquieting images, obviously for a young teen audience for which the whining and the pocket redemptions will seem like tablets from Sinai. With the Mirrormask of the title a talisman that represents the beginning and the end of the tale's psychological complexity (look inside yourself, you see others as reflections of yourself, you mask yourself in misdirections, and so on), its quest is suddenly light and its success a strange, foregone conclusion. If the picture is a parable for a young girl coming of age (the "darkness" that is the film's villain a lush, hormonal tide), its resolution suggests that maturity is the enemy--that the ultimate goal of growing up is failing to do so. Helena doesn't embrace her shadow self, she vanquishes it, and in so doing she invalidates the aim of stories like this. It's a conundrum that Gaiman understands in his fictions, since many a storyline of his closes with the bittersweet suspension of his heroes' attempts to transcend their self-inflicted delusions. Mirrorball isn't a triumph over the things of childhood as much as it's a regression into them--a failure of matriculation that infuses the picture with its sense of irony and its feeling at the end of the cyclical journey that there was just a whole lot of loud nothing leading up to it. Originally published: September 30, 2005.