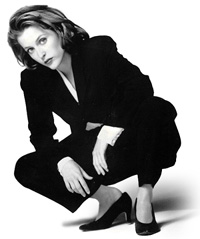 by Walter Chaw I used to, like every other dork I know, love "The X Files"--used to look forward to its mythology episodes as though series creator Chris Carter actually had something up his sleeve in terms of a long-term plan for his show, never suspecting until the middle seasons that the emperor was nude. (Desperate, too.) See, "The X Files" is guilty of giving the public what it wanted, forgetting that the public never really knows what it wants (would it have asked for a show about two platonic FBI agents investigating UFOs in the first place?) and that once it gets what it thinks it wants, it tends to stop waiting around for it. "The X Files"' slogan "The Truth is Out There" became something of an early-Nineties pop-cultural mantra akin to "Keep On Truckin'" of the mid-'60s to mid-'70s and "Shit Happens" of Reagan-era id suppression (the biggest surprise of "The X Files" may be how creaky and antiquated it is a mere twelve years out of the can)--and like other shorthands for real thinking, it has a bumper-sticker hookiness to it but not a lot of meat upon closer examination. That kind of lack of substance dooms it to cultural specificity, with camp immortality and flea-market coffee mugs its only eternal footmen. In retrospect, "The X Files" couldn't have had a better tagline.

Its obsolescence--marked specifically by the moment David Duchovny decided to pursue other interests (like Téa Leoni, thus who can blame him?) and culturally by the moment in 1999 that "The Sopranos" rewrote the television melodrama for an audience demanding more interpersonal complexity (and much better writing)--is thrown into sharp relief by the decision to repackage fifteen of the show's episodes in a four-disc set called "Abduction". Not complete by any means, the ploy is ostensibly an opportunity for neophytes to get a crash course in one of the major reasons the series began to eat itself after two seasons--or, perhaps, a chance for long-time fans to give their twenty-disc changers a rest with a thematic mix-tape. (Oddly, though, this collection excludes season one's "Conduit.") It's the equivalent of the convention freak's ability to rattle off the minutiae of every season and narrative progression, replete with episode numbers and titles, applied to an endeavour that reeks of financial opportunism, if not an eleventh-hour attempt to lend importance to what posterity has already deemed inconsequential. Most of its episodes are culled from the first and second seasons, perilous times for the series as the studio's Sword of Damocles hung especially tremulous and Chris Carter, et al swung for the fences with more gusto than design.

If there's an urgency to such early arcs as the two-part "Deep Throat" and "Duane Barry" storylines, credit the belief that every episode, literally, could be the series' last, and so why not disappear Dana Scully (Gillian Anderson), spiriting her aboard a spaceship where Anderson's real-life pregnancy is exploited by an alien-impregnation plot? Why not return Fox "Spooky" Mulder's (Duchovny) sister to him only to reveal her as a clone trying to protect other clones from an Alien Bounty Hunter (Brian Thompson)? Why not constantly place your key players in abject peril when the truth was that, at any moment, the network hammer could fall, repositioning a cliffhanger as a particularly haunted swan song? It's this hell-bent brinkmanship that made the initial batch of "X Files" superior to the run-of-the-mill evening family action hour--and it's that premature ejaculation, probably, that doomed the last six years of the show to something like a flaccid afterglow. After a while, it stops being all that fun trying to keep up with a mythology that's pretty clearly broken free of its leash. Moreover, it stops being enjoyable to watch a flirtation between two characters the landlord of whom had publicly vowed would never get romantic. (Sexual tension in abeyance is only clever for so long, at which point it becomes tragic and pathetic, like The Remains of the Day.) Mostly, though, I'm thinking "The X Files" crashed and burned because with a few obvious exceptions, it's not very well written.

Too much narration mars the early seasons, as Scully was burdened with providing Doogie Howser journal conclusion/summaries at the close of her misadventures with mysterious, hermetic Fox. Mulder, too, in the Alien Bounty Hunter twofer, is saddled with what became the typical drone of the "X Files" shuck-and-jive: "I was driven by the belief that the misconception of the perception of the blah that the blah of the blah of the blah of the blah of the blah would sustain me. That the..." It's the kind of deadening shit that leads to the further mystification of Native Americans in later seasons and the amplification of Mark Snow's syrupy score to sense-killing levels. Much has been written on the great performances turned in by Duchovny and Anderson, but hindsight is a harsh mistress. Here, Scully's character freaks out in a cheesecake moment when she disrobes in front of Mulder in order for him to examine a trio of mosquito bites she thinks might be alien love nibbles. Which leads to a campfire confessional as Fox tells the story of how his little sister was abducted by little green men in 1973 while Scully snuggles in her nightshirt beneath a blankie on Fox's bed.

Poorly-plotted (loose at the very least), with so much atmosphere that it's like being smothered beneath a hemp quilt, the abduction mythology episodes seem to highlight most clearly the "X Files" scribes' unfamiliarity with real-life issues à la gender relationships, workplace politics, female fertility, and family dynamics. (Consider that a mediocre season-five episode guest-written by Stephen King ("Chinga") did more to flesh out and humanize the Mulder character than five years of interpersonal feints and misdirections.) Heretical to say, maybe, but "The X Files" was only great in stray single episodes--the rest of the time it coasted on those gems and on the broken promise that all this stuff about alien colonization, smoking men, and mixing DNA was leading somewhere more coherent and rewarding than black oil and Annabeth Gish.

THE DVD
Packaged in two wafer cases tucked inside a cardboard slipcover, the four discs of "The X Files: Abduction - Mythology Collection" are silk-screened with new art and feature handsome menus, five recycled commentaries, and a fresh documentary, but are otherwise indistinguishable from the DVDs already mastered for the full-season collections. As budgets improved with the popularity of the series, so, too, did the picture and sound quality; not much more to say about the fullscreen presentation(s) and 2.0 Dolby Surround audio beyond that they're a small step up from broadcast television. Writer/creator Chris Carter chimes in for uneventful yakkers on "Deep Throat" and "Duane Barry," starting off semi-strong but lapsing into unforgivably long stretches of silence. Still, it could be worse--he could be director R.W. Goodwin, who, on "The Erlenmeyer Flask" and "Anasazi," offers exhausting play-by-play that will provoke nails-on-a-chalkboard frustration in sentient listeners.

Writer Frank Spotnitz chimes in on "End Game," revealing that it's the first script he ever had produced in any format--which is charming in its way, though not entirely a surprise. The final platter includes a 27-minute retrospective--"Threads of the Mythology: Abduction"--that, one surmises, is one-quarter of a longer piece to be spread out over the four "Mythology" box sets winging their way to us courtesy Chris Carter's gift for self-promotion. Certainly one hopes that this is a fragment since it's as discursive and arbitrary as the fifteen episodes of "Abduction." Talking heads shed little to no light (what good is light if there's nothing to see?), the prime moment coming when a couple of fellows, secure that the "The X Files"' most ardent supporters' pareidolia will find Virgin Marys in knotholes and grilled cheeses, admit that the show's mythology doesn't make a lick of sense. Originally published: August 3, 2005.