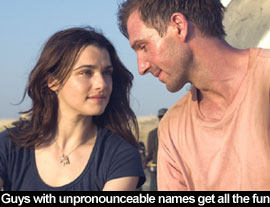 by Walter Chaw An interesting companion piece to both Philip Noyce's The Quiet American and Andrew Niccol's upcoming Lord of War, non-antipodean Fernando Meirelles's follow-up to City of God, the John Le Carré adaptation The Constant Gardener, is beautifully shot in the murky style of David Fincher or high-fashion photography. Not a bad thing--indeed, The Constant Gardener is one of the most technically proficient pictures of the year--but not a great thing, either, when talking about children killing children in Brazil's favelas or, as is the case here, a British diplomat confronting his culture's pathological politeness in the plague-fields of Kenya. What recommends The Constant Gardener is the uniform tonal perfection of the performances, and even if the film itself seems to glamorize (and condescend to) the plight of starving and exploited African nations, it at least demonstrates, along with its cinematic brethren (add The Interpreter and Stephen Gaghan's forthcoming Syriana to that list), cinema's willingness to take a more global stance. A paternalistic one, for the most part, but a global one just the same.

At the heart of the film is the marriage between free-spirit bleeding heart Tessa (Rachel Weisz) and button-down assistant ambassador Justin Quayle (Ralph Fiennes)--an "opposites attract" construct that leads to a lot of misunderstandings once the appropriately-dubbed Quayle experiences Tessa's passions vicariously. Quayle's British stoicism--moreover, his manhood--is tested with snippets of overheard conversations, in particular a suggestion that Tessa might be running around on him with a colleague who's later (cheaply) revealed to be gay. And when a letter falls into the wrong hands and all of Quayle's hurt and betrayal is distracted by Tessa's apparent assassination, he, for the first time in his life, is stricken by curiosity. Elements of The Remains of the Day are here in its doomed love story and its very proper protagonist realizing (almost too late) that he's been a passive observer while the most important issues of his day passed him by. The Constant Gardener is billed as a current-events thriller, but it's really a posthumous love story (an elegy, I guess is the closer term), and as such it falls into the same traps as the admittedly far more loathsome The Interpreter. That is, it makes the real tragedy a backdrop to the fake tragedy so that the real tragedy becomes the microcosm to the formula convention.

The quality of the work from Fiennes and Weisz almost salvages The Constant Gardener. Given an arc and a half-dozen moments of revelation, quiet or otherwise, Fiennes, especially, continues to evolve as a performer capable of taking a showy role and crafting from it some sort of recognizable humanity. I don't know that there's a misstep, which makes Meirelles's instinct to intrude on even the quietest moments with an editing trick or showy camera movement a self-conscious flourish that reveals a great deal of insecurity behind the director's formidable skill. Bill Nighy is always good; here he's the arch bureaucratic villain involved high up the pharmaceutical food chain and responsible for rubber-stamping a policy of human testing in third world countries. (He balances limited schlub nebbish actor Danny Huston's risible attempt at an accent.) But, again, with something as important and complex as local government-sanctioned human trials of new drugs, there needs for me to be not only a spotlight shone on the African officials responsible for the welfare of their citizenry, but also a mention of the "other" side. (Thinking specifically of the trials that led to the Jarvic artificial heart.) I don't have any answers, but The Constant Gardener doesn't have any questions--just the one about whether or not Quayle will finally know Tessa when it's almost too late to matter. Romantic, sure, and it would have been without sinking the Titanic. Originally published: August 26, 2005.