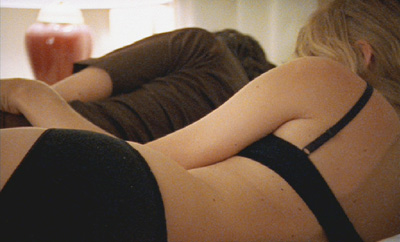 by Walter Chaw Its final cut a full thirty minutes shorter than the one that was shown to widespread derision at last year's Cannes Film Festival, Vincent Gallo's The Brown Bunny is laced with melancholy and a crushing sense of loneliness. Every shot is either a claustrophobic interior contemplation of Gallo at the wheel of his van, a highway unrolling endlessly before him, or a long shot of Gallo standing in the open and at a distance: isolated and diminished. For all of its excesses, the picture is excruciatingly modest--almost meticulous--in its slow unfolding, culminating with a now-notorious fellatio scene that runs ten minutes and presents sex at its most insectile and threatening.

There's nothing conventionally entertaining about The Brown Bunny; it would be what Andy Warhol would have championed as the kind of repetition that reminds the viewer of his own banal automatism. (Consider this passage from POPism: The Warhol Sixties: "The more you look at the same exact thing, the more the meaning goes away, and the better and emptier you feel.") It's film as an examination of desperate masturbation and the empty self-hate that sometimes follows, as well as a ferociously affective apocalyptic lyric on the dead end of male sexuality and sexual jealousy. Gallo's repeated mantra of "I hate you so much" in the "afterglow" of ejaculation is directed at a wall--a screen, perhaps, upon which he's spent his hopelessness and bile.

Bud Clay (Gallo) mourns the end of his relationship with Daisy (Chloe Sevigny) by packing up his motorcycle and travelling cross-country. On the road Bud meets a series of ephemeral and sexual women named for flowers (among them a blasted-looking Cheryl Tiegs) with whom he acts out mostly silent, almost impressionistic tableaux of misspent desire and frustrated longing. A scene of driving (there are a lot of them, and what's more American than unconquerable spaces and conspicuous consumption of fossil fuels?) scored to Gordon Lightfoot's "Beautiful" is just that: lonesome, winsome--gorgeous.

Sociopath loners and macho anachronisms at the heart of every legend of that barrel-chested, all-American frontier attitude, Gallo is engaged in the kind of dispassionate mythmaking of Matthew Barney. The Brown Bunny is a vicious a skewering of the cult of manhood that finds its themes of detachment and violent rapprochement with a quieter eloquence than Gallo's feral Buffalo '66; for all the charges of puerility, the picture is the product of a maturing artist. It is narcissistic in the sense that all earnest art is narcissistic. You get the sense that Gallo is looking for an answer to a question about the very nature of man and his desires that doesn't--that can't--have an answer, and his discontent, bestial and mutated, trickles out of him in a ribbon taken up by a projector reel.

The process is organic even as the results can be uneven, but in faith there's really no conventional way to approach The Brown Bunny. It occupies a tradition in art that challenges the precepts of art. I'm reminded of Vladimir Nabokov's apocryphal tale of a zoo-imprisoned ape that, after much coaxing, was prodded into rendering a sketch with charcoal on paper and drew the bars of its cage. The Brown Bunny describes the bars of Gallo's prison. It describes loneliness and anguish in slow arcs and menacing repetition. And though it can lull with its throbbing implosiveness, it can also seduce with its vision of a world at its end, swallowing itself in inexorable inches appalled and revolted. The state of man is abject, says Gallo, and The Brown Bunny is his elegy to entropy's dark victory.

THE DVD
by Bill Chambers You have to squint to find it, but there it is, nesting on the back cover of The Brown Bunny's DVD release: the Superbit logo. But while the quest for technical perfection implicit in the Superbit manifesto may at first seem anathema to the film's Seventies mystique, The Brown Bunny's vintage crudity was so premeditated as to necessitate a corresponding amount of TLC in the telecine suite. Presented windowboxed in 1.65 anamorphic widescreen*, the film looks exactly like it did in theatres, all but confirming that the transfer was sourced from the 35mm blow-up (Vincent Gallo's viewing preference) rather than the Super16 negative. Grain ranges from mild to swarm-of-flies depending on the lighting conditions, though it's never aesthetically inappropriate; saturation and contrast are likewise true to the picture's naturalism. On the other hand, both the DTS and Dolby Digital 5.0 options are mixed disappointingly low, and neither responds terribly well to amplification. (That being said, there's some involving use of the discrete soundstage during the opening race and later when Bud checks his motorcycle into a body shop.) The disc's only extras are two purposefully opaque teasers for The Brown Bunny, one of which throws a quote from ENTERTAINMENT WEEKLY's resident dingbat Lisa Schwarzbaum right back in her face. Originally published: August 1, 2005.