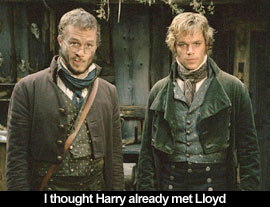 Bookish Jacob (Heath Ledger) and dashing Wilhelm (Matt Damon) travel the countryside staging supernatural infestations, The Frighteners- (or Dragonheart-) style, for the purposes of fun and profit. It's just a matter of time, then, before an actual supernatural infestation tests the ghost-busting talents of the Brothers Grimm, deep in an enchanted wood in the middle of French-occupied Germany. Enter woodsman's daughter Angelika (lovely Lena Headey, deserving better), twelve missing children (Little Red Riding Hood and Hansel's Greta among them), diminutive French governor Delatombe (Gilliam mainstay Jonathan Pryce), Italian mercenary Cavaldi (Peter Stormare), and evil witch (Monica Bellucci)--all of whom run around without much in the way of guidance from script or director and so behave in the frenetic way that suggests a community theatre production of "Noises Off!". Kruger's attempts at weaving Grimm Fairy Tales throughout his tired master plot (for he knows no other kind) are sub-Shrek touch-points less organic than great, ugly markers pointing at themselves with smug, post-modern self-satisfaction. Products of an idiot child over-pleased with his own modest accomplishments.

Damon is badly miscast, Ledger continues to disprove early predictions of his idol status, and Stormare is so out of control that he exists at every moment in an entirely different film. (Is Daniel Day Lewis's performance in Gangs of New York the template for this new variety of upstaging?) Headey is an afterthought, Bellucci, on autopilot here, has self-consciously appropriated Sophia Loren's title as Queen of the Sex Kittens Land, and the production design, a profusion of mud and clutter, swallows everything else whole. The Brothers Grimm is hard work that reaps no rewards, with a plot that is at once the very model of simplicity and the very definition of convoluted. It's an ugly movie without commensurate beauty and a cruel one without commensurate kindness, lacking the sweeping romance of Gilliam's The Adventures of Baron Munchausen, The Fisher King, and Twelve Monkeys, the sting of Brazil and Fear and Loathing in Las Vegas, and the sense of childhood at its end of Time Bandits. It lacks any kind of heart, in other words, as well as any sort of opportunity to connect with the film through its characters. All your time is spent noticing how bargain-basement the special-effects look (especially a cheesy werewolf) and wondering exactly how long it is until Gilliam's other 2005 release, Tideland, arrives to possibly wash this bitter taste out of your mouth. Originally published: August 26, 2005.