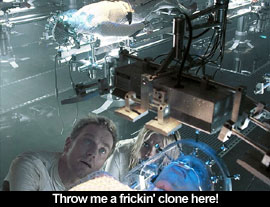 The Island is the most plothole-heavy picture in a summer that's already seen leaky ships Episode III and War of the Worlds, made that much worse for this all-pervasive suspicion that the jolly idiots responsible actually think they're being really fucking clever. Lincoln Six Echo (McGregor) and Jordan Two Delta (Johansson) live in a sterile THX 1138 dystopia where everyone has the education of a fifteen-year-old (which, for Bay, means they're just cracking that Dick & Jane primer), meaningless assembly-line jobs, no concept of sex or sexuality, and letters/numbers for names. (Turn their monikers into vanity plates (L6E and J2D) and you've got the futuristic tale of "El Sexy" and "J'étudie" ("I Study" in French.)) The product placement in this tomorrow-orrow land is oppressive (MSN, Puma, XBox, Aquafina, Cadillac), almost as oppressive as the denizens' daily regimes and social strictures, relieved only by the Blade Runner promise of a prelapsarian "off-world" called "The Island." This will lead, of course, to one of the characters saying to another: "I know what The Island is. It's you. And...and me!" It'll also lead to the discovery by L6E that he's a clone designed for harvesting when his real-world sponsor develops cirrhosis or loses an eye to a BB gun. Not a bad premise as premises go (that is, if you think Robin Cook's 1970s plots are the height of originality), but the way Bay handles it is as some fundamentalist right-wing screed against the potential misuse of stem-cell research. Folks steadfast in the belief that Hollywood has a liberal agenda should park themselves in front of Bay's megabucks portfolio for a shot of the old religion.

So L6E runs into the women's section of their colony, where he's never ventured before, and makes a beeline to J2D's cubicle in the first of around three-dozen incomprehensible things about the film. Together, they flee into the 2019 countryside, enlist the aid of a pal, McCord (Steve Buscemi), who gives L6E the ugly piece of advice that a man should never, ever, hand his woman his credit card, and end up looking for their sponsors in Los Angeles with the intent of lobbying Congress or something. There's a great chase scene involving giant metal barbells and a flying motorcycle, though as far as action goes, that's it. Evil doctor Frankenstein (named after the Elephant Man, for what it's worth), Dr. Merrick (Sean Bean), hires say-it-together-ex-Delta Agent Albert (Djimon Hounsou) to track down his errant spawn, making the same mistake most evil scientists do in not seeing the connection between his hired henchmen and his persecuted monsters. See, The Island goes to great pains in comparing the clones to both Jews during the Holocaust and Africans subjected to ethnic cleansing (note the branding and the gas chamber showers), and while on the one hand you can sort of see where they're going with it, on the other it's appalling to try to borrow gravity from real-world atrocities to bolster this insulting, obvious piece of crap.

As El Sexy and I Study learn how to French-kiss and J2D discovers lacy black lingerie, the realization sets in that Bay has managed to turn the smartest, most gifted young ingénue on the scene into a vacuous, glassy-eyed victim so inconsequential and misused that when she's inevitably captured by the bad guys (for using a credit card to buy a bunch of kids Ben & Jerry's™ ice cream, natch--what a bimbo!), no one thinks to check her for a gun. I could go on about the fortuitously-placed ball-bearings during a boring foot-chase, the fact that L6E isn't the least bit surprised at the surprise that J2D has been re-captured, that Bay kills a woman while she's laid out in examination stirrups, paints another as essentially a fetish doll, and has a waitress in a bar in his sterile, bleach-white society decked out in a black leather short skirt and halter. (Pair it with a tired, badly-paced homophobia joke and identify a pathetic reflection of Bay's fear of the contents of his own closet.) But the sad case of The Island is that it's bloated, slick, and well past it's sell-by date. Bay's own imitators and he himself have so befouled the waters in which they swim that this film, by being the very quintessence of high-concept/low-execution fumbling, commits the one crime I suspect Bay is most horrified to commit: it's hokey, retrograde cornpone--and Bay's fingerprints (too loud, too much score, too much director, too much dumb) are all over it. The king of cutting-edge nihilism is saddled now with this pokey, conservative dinosaur. And though I would've preferred that it just be good, at least The Island's ability to corrupt is highly suspect. Originally published: July 22, 2005.