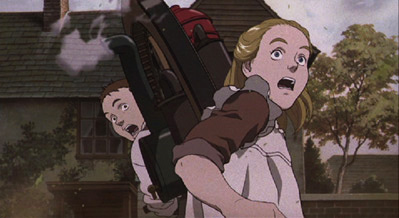 by Walter Chaw Katsuhiro Otomo's Akira is both the best and the worst thing ever to happen to anime in the United States. For the believer, its Blade Runner cyberpunk ultra-cool was an eye-opener, but to hold the film up as the standard for the medium means that a lot of people looking to it as their introduction believe that anime is a little excitement cordoned off by long stretches of confused, gravid exposition. It tries to condense hundreds of pages of metaphysical text into scientist characters delivering what seem like endless exchanges in high-minded gobbledygook. Akira's popularity obscures the finest examples of the medium, films that manage to balance serious metaphysical musing with actual forward momentum (the two Ghost in the Shell films, for instance); to tell adult tales in affecting ways (Grave of the Fireflies); to redefine genre thriller (Perfect Blue), action (Ninja Scroll), and fantasy (Princess Mononoke); and to present children's fables as artifacts that are as useful for adults as they are for kids (Spirited Away, My Neighbor Totoro). Akira isn't the greatest anime film, just the most well-known, and it's worth speculating how its notoriety may have retarded the maturation of American animation.

So sixteen years later, Otomo makes his return to feature-length anime with the deadly Steamboy, a film that fails in almost all of the same ways that Akira failed while falling short, too, in terms of relative historical importance and even the low standard that that seminal work set for narrative momentum. It's boring and, worse than boring, it's proselytizing and obvious. War is bad, says Steamboy in every conceivable way that it can be said, treating the platitude like a miser does his gold bullion, polishing it to a blinding sheen without increasing its value. Even Otomo's celebrated visual style is presented from beneath a brown haze, the simulated industrial-revolutionary smog handily blanching the palette of primary colours. A lot of the action takes place in the bowels of an industrial nightmare--at least until the film's glorious finale, which finds a late-Victorian Death Star destroying the greater part of London in a cloud of frost and smashing stuff up real good. The problem with the visuals, though, isn't necessarily that they're murky (and so intricate that much of Steamboy is indistinguishable wallpaper), but that there appears to be a basic misunderstanding of the cultural crossed-signals represented by the archetypes of Japan and England's respective Industrial Revolutions. Where the train, in Japan, represents eternal cycles, arrivals and departures (it was Ozu's image of choice), in England it's the infernal engine in the forests of the night: industrial miracle vs. industrial nightmare.

The confusion internal to Steamboy's machinations is located somewhere between the idea of wonder on the one hand and a sort of Nobel, what hath we wrought discomfort on the other--its message of "war is bad" muddied by the Japanese, who suffered pretty terribly at the hands of weapons technology, and the British, who didn't. Ray Steam (voice of Anna Paquin) is the plucky inventor kid of dour inventor Eddie (Alfred Molina), himself the son of dour inventor Lord Steam (Patrick Stewart). One day, granddad sends a "steam ball" to Ray with the instruction that he should keep it from Eddie at all costs. The evil O'Hara Corporation--the head of which, by blood, is an insufferable little girl named Scarlett--has turned Eddie, it seems, into some kind of cyborg. Scarlett O'Hara. Give it a second, it doesn't get any funnier.

Ray runs around 1866 London, steam ball (it's like a nuclear reactor, but steam) tucked under his arm as men in black chase him around. Eventually, he confronts his father and his grandfather, is betrayed by those he considers allies, and is involved first in a giant, moralizing battle, then in the abovementioned attack on London aboard a floating ball. None of that may sound particularly unforgiveable, but Otomo can't resist having his characters spout off at excruciating length about how technology shouldn't be used for evil (yes it should, no it shouldn't), culminating in the picture's stupidest moment, in which Lord Steam reveals that he's installed a merry-go-round on his Death Star. You know, for kids. Paced like a wake and written by that guy you wish would just go home, already, Steamboy is a lot of chore for a tiny bit of reward. You can do better. Originally published: March 18, 2005. THE DVD
by Bill Chambers Sony unleashes the Director's Cut of Steamboy on DVD in a Collector's Gift Set that retails for $23 more than the standalone release. Letterboxed at 1.83:1 and enhanced for 16x9 displays, Steamboy itself receives a disappointingly murky presentation that appears to have been transferred from celluloid, adding a generation loss--not to mention minor grain and flecking--to a film that was created digitally. Comparing it to Pixar's transfers is one thing (what doesn't pale next to The Incredibles?), but even the clips excerpted within the documentary supplements are considerably less ashen, and edge-enhancement further compromises the image. Somebody really dropped the ball here. Audio options include otherwise-identical English and Japanese dubs in 5.1 Dolby Digital, and at home the picture sounds better than it looks, with the sidewall imaging during an early locomotive pursuit a standout aspect of this mix (supervised in both languages by Keiichi Momese). The rear discretes are alive with the debris of Steamboy's near-constant stream of devastation, while the subwoofer doesn't seem to let up for the last half of the picture. Note that the English subtitles represent a proper translation of the Japanese dialogue as opposed to a transcription of the heavily-paraphrased English dialogue. Sadly, despite Katsuo Nakamura's more organic characterization of Lord Steam (Patrick Stewart's voice just sounds weird coming out of a bare-chested, crazy-prospector type), the film is that much duller in its original language.

Under special features, find three featurettes and graphical ephemera. In the overlong but refreshingly laid-back "Re-Voicing Steamboy" (19 mins.), Anna Paquin tells us she did the film because her boyfriend is a huge anime buff (funny, I don't recall saying that), though aside from her shrug of "why not?" in response to the obvious question of why a 22-year-old woman from New Zealand is lending her pipes to a 13-year-old boy from Manchester, the motivation behind her casting remains cryptic at best. Still, one admires American director Rick Zieff's professed dedication to seeking out regionally authentic accents/dialects, especially since that's a luxury Japanese animators obsessed with Victorian England don't have in their homeland. (And Paquin eventually treats us to the single most erotic pantomime of a boy on a unicycle I have ever seen.) Steamboy's auteur is typically glum in "Interview with Katushiro Otomo" (5 mins.), wherein he laments not only the lack of humanity in his anime, but also how his enthusiasm always begins to flag as a given project crawls towards completion. Perhaps robbing his comments of sardonicism, the piece is overdubbed, a fate that thankfully doesn't befall the "Multi-Screen Landscape Study" (19 mins.), a three-panel goulash of concept art, research materials, and subtitled interviews with unidentified members of the production team.

The kind of thing they'd screen at Comic-Con, this de facto making-of nevertheless doesn't do a very good job of selling the movie (the animators most vividly remember interdepartmental conflicts)--and the many testaments to working without deadlines serve only to shed light on Steamboy's suffocatingly overindulgent design. Rounding out the bonus material: the slideshow epilogue stripped of the closing credits ("The Adventure Continues" (3 mins.)); five shots tracked through various stages of development sans proper annotation ("Animation Onion Skins" (4 mins.); and a montage of key artwork set to passages of the score ("Production Drawings" (6 mins.)). Trailers for Final Fantasy VII: Advent Children, The Cave, and the 2001 Metropolis play on start-up and join previews for AstroBoy, Cyborg 009, D.E.B.S., Memories, and Mirrormask under the applicable sub-menu. The gift set's cardboard container houses the real goodies, at least from a fan perspective: stacked atop the DVD's keepcase are ten Steamboy postcards, the final instalment of Tony Takezaki's Japanese-language manga based on the film, and, the pièce de résistance, a 166-page, faux-burnished booklet compiling character sketches, mecha designs (i.e. mock blueprints), and select storyboards, some if not all presumably the handiwork of one Katushiro Otomo. That being said: for completists only. Originally published: July 18, 2005.