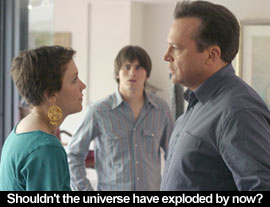 by Walter Chaw As abortion dramedies go, this year's already seen Todd Solondz's far superior Palindromes and will soon see the abhorrent right-wing stem cell flick The Island, and for bellwethers of such things, there's still Hal Hartley's timeless Trust from fifteen years back. (Not incidentally, Don Roos's best and first film as a director, the teen-pregnancy drama The Opposite of Sex, features Trust's Martin Donovan.) So Roos's Happy Endings isn't just irritating, it's superfluous, too: a gimmicky way to tackle the tired romantic roundelay format that should be viewed in a double feature with Miranda July's almost-as-irritating Me and You and Everyone We Know just so you can say you've done your time this year in the indie coal mine. Truth is, if you can suffer through Roos's device of insouciant half-screen captions that periodically comment on the action, critique his characters, broadly clarify his themes, and make predictions about their futures (a lot like the video for Van Halen's "Right Now") without punching the person in front of you, you're made of sterner stuff than I. They've honestly handed out Purple Hearts for less.

Mamie (Lisa Kudrow) and stepbrother Charley (Steve Coogan) conceive a child as teens Mamie then goes to Arizona to abort. Nineteen years later, Mamie is an abortion counsellor involved with Mexican masseuse Javier (Bobby Cannavale) while Charley is a chef involved with self-centered Gil (David Sutcliffe). Mamie is approached by skeezy documentarian Nicky (Jesse Bradford) with an idea for a film that revolves around Mamie being reunited with her apparently un-aborted foetus, leading Mamie and Javier to offer to fake a different documentary on Javier being a sex-worker masquerading as a masseuse, quick to give his rich women clients a "happy ending." More disturbing than this revelation--that the whole film is titled after a euphemism for a female money shot--is the revelation that Roos thinks he has anything original or thoughtful to say about truth and fiction in documentary filmmaking. Charley's restaurant has a karaoke machine because after Lost in Translation (and, I guess, Duets), karaoke is the new hipster means to tapping the spiritual vein, and running Charley's machine is Otis (an excellent Jason Ritter), who invites professional gamine Jude (Maggie Gyllenhaal) to join his garage band upon hearing her (ironic) rendition of Billy Joel's "Honesty."* Otis, confused and moribund, is a closeted teen whose rich dad, Frank (Tom Arnold), falls for Jude thinking she's Otis's girlfriend. (Insert sigh here.)

Onward: Charley and Gil are best friends with a lesbian couple monopolized by the extraordinarily unpleasant Pam (Laura Dern), who so dominates those scenes the quartet share that her partner Diane (Sarah Clarke) is like wallpaper. Pam and Concerned Reaction Shot have a son whom Charley and Gil suspect was spawned by Gil's frozen spunk. This leads to a lot of feverish dialogue sprung fully formed from the travel-worn Indie Pic Dysfunctional MadLib and a lot of eyeballs gazing longingly at the promise of sanctuary the theatre exits offer. The message of Happy Endings seems to be that the truth hurts, but that it will also set you free--except that Roos's tacked-on happy endings have all the honesty of a Billy Joel ballad. Indeed, Happy Endings has aspirations to Kurt Vonnegut's Kilgore Trout meta-winking but relies on stunt casting, Pepsi product placement, and fart and boner jokes to grease its cosmic wheels. I did like Jude comparing losing her virginity to a thirty-year-old man to American Beauty "except I didn't have roses coming out of my tits" (in fact, there's not a lot that I don't like about Maggie Gyllenhaal, except that she's played the same role eight or nine times in a row), and I enjoyed a brief cameo from Johnny Galecki, The Opposite of Sex scene-stealer long overdue for a vehicle all his very own. But mostly I sat before Happy Endings with my lips held in a thin white line, marking time until Roos got tired of spinning his webs of astringent, pithy, smug little nothings. Originally published: July 15, 2005.

*As a side note, if Billy Joel were McDonald's, his shingle would read "Cheerfully Dispensing Terrible Music for Going On Four Decades Now." return