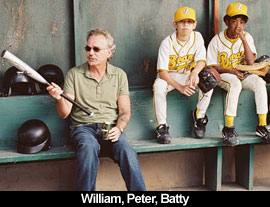 Buttermaker (Thornton) is an ex-Major League hurler fallen on hard times and making a living as an exterminator (pool cleaner in the original), which leads to a few scenes of him emptying coolers full of vermin into a dumpster. (It bears mentioning that baseball is the only of the four major sports for which both Matthau and Thornton can be convincingly cast as ex-players.) Needing a few extra bucks, he agrees to coach a little league team of misfit boys (and one girl), teaching the kids over the course of a season what it means to be a winner and naturally learning a little something about himself in the process. Meanwhile, evil coach Bullock (Greg Kinnear, filling in for Vic Morrow) has a predilection for wearing tight pants and abusing his players--and in case we weren't paying attention (and so that our eyes can roll as well), one of the parents as the credits roll says, "It's called a 'moral victory.' It's not as good as a real victory, but it's very nice."

Adding an East Indian and a kid in a wheelchair but otherwise keeping the racial mix of Ritchie's film largely intact, Linklater's Bad News Bears is often a shot-for-shot redux--the worst kind of cover song that does nothing new that's good while failing to accentuate whatever made the first worth updating to begin with. I'm not against remakes as a rule. Films like Jonathan Demme's The Manchurian Candidate or Philip Kaufman's Invasion of the Body Snatchers add immeasurably to the texture of their time, something that the originals could only do esoterically. Bad News Bears, on the other hand, is little more than a revival tour of a hoary old favourite, and one that actually highlights by its minor elisions and additions exactly how much more timid we've become over the last thirty years. The kids--particularly Sammi Kraft, subbing for Tatum O'Neal--are fine; the "shit"-heavy dialogue to skirt the "R" that "fuck"-heavy dialogue would have earned is sometimes funny, if never really shocking ("South Park"'s "shit" episode trumps all comers); Billy Bob is comfortable in full Bad Santa mode (and indeed the scribes of Bad Santa are back with Bad News Bears); and Linklater, whose professed dream has always been to do a baseball movie (if not necessarily someone else's baseball movie), has at least gotten it out of his system. Originally published: July 22, 2005.