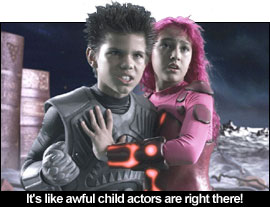 by Walter Chaw So it was written by an eight-year-old and shot in the same horrific 3-D process as Spy Kids 3-D: Game Over, meaning that if you go see The Adventures of Shark Boy and Lava Girl in 3-D, you're an assclown and there's really no helping you. When he's not being an idiot, director Robert Rodriguez is capable of something as subversive--as arrestingly, magnificently inappropriate--as Sin City, but so much of his time is spent indulging his kids that history may come to see him as the last word on why children shouldn't be the arbiters of culture. Around the age of five, I once sat watching an anthill for eight hours straight, fully entertained; I have no doubt that it wouldn't make for a good movie. And so the legion of folks, critics included, prone to qualifying their takes on children's films by saying that kids will enjoy it are, in fact, not saying a damn thing. Of course your children will enjoy it--given enough flashing lights and farting noises, they'll like a George Lucas movie. For five dollars and a screaming headache less, you could entertain your precious tots with a box of matches and a can of beans.

Max (Cayden Boyd) keeps a dream journal, is picked on by a band of bullies, and has parents (David Arquette and Kristin Davis) who are always bickering. To deal with the sucking emptiness of his misbegotten life, he invents pint-sized superhero duo Shark Boy (Taylor Lautner) and Lava Girl (Taylor (again) Dooley), the former raised by sharks and needing a Ritalin blowdart right to the temple, the latter made of magma and uncomfortably sexualized. ("She's hot!" one kid double-entendres.) Shark Boy wants to know where his father is, Lava Girl wants to know what her purpose is--the two of them together representing the abyss in Max's prepubescent psyche that may one day result in his purchasing a high-calibre rifle and finding a nice, centrally-located clock tower to climb. Shark Boy and Lava Girl come to Earth to take their maker back to planet Drool (puerile, but no less so than a Count Dooku or a General Grievous), where Darkness (like in Legend, say) is taking over the land. The villain? Bad writing. Oh, and Mr. Electricity (George Lopez), who at least isn't Sylvester Stallone--which is, you'll agree, a backhanded compliment at best.

The Adventures of Shark Boy and Lava Girl in 3-D is the exact equivalent of listening to someone else's hyperactive kid go on for an hour-and-a-half about some sugar hallucination he's had, punctuated by bad jokes circulating around daycare and filthy with infant morals and arrested sexuality. Planet Drool is Candyland run afoul of Piers Anthony's groaner machine, sending our heroes through the Passage of Time on the frequently-derailed Train of Thought while dodging sudden brainstorms. It never gets any funnier than that (jumping on a banana sundae boat, Shark Boy says, "Let's split!"), and the 3-D--which constitutes a good 90% of this disaster--is a colossal waste of time. The only age group who'll get a kick out of it is the same age group that won't keep the glasses on their heads. Me, I took mine off fifteen minutes in to avoid a vomit-inducing migraine. The Adventures of Shark Boy and Lava Girl in 3-D is dreadful, deadening stuff: the rich people up the block buying their brats expensive toys so manic and deafening that they lower your quality of life. If you go, you just encourage them to buy more. Originally published: June 10, 2005.

Hey Aqua-magma, that's the funniest thing I've read all week. Looking forward to your impassioned excoriation of Walter for daring to dimiss the beautiful empowering messages of Mac and Me once that review gets put back on the site....