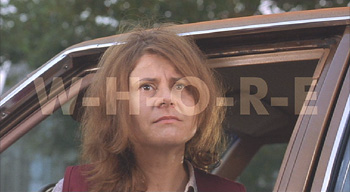 by Walter Chaw Shaun of the Dead isn't a spoof, it's a traditional zombie film introduced as a romantic-comedy and infected with a sly British-cum-"The Simpsons" intelligence and sensibility. Director Edgar Wright, who co-wrote the film with star Simon Pegg, made his mark with a smart, hilarious Channel 4 comedy series called "Spaced", a show that bears comparison to "The Family Guy" in its pop-culture genius and frequent fantasy non sequiturs. The genesis of Shaun of the Dead appears to be an episode of "Spaced" in which Pegg, having an unfortunate trip, hallucinates himself shooting hordes of zombies. That the picture is born from a joke on a television show offers endless possibilities for interpretation, best among them the tidy read that television is still the best means towards auto-zombification.

Less wryly, Shaun of the Dead understands that the essential interest of the zombie genre is that when it cooks, it cooks with the gas of satire and trenchant sociology. Horror films are the most sensitive indicator species of the subtext that informs our cultural state, and what Shaun of the Dead contributes to the conversation is the fascinating suggestion that we're at a point in our (d)evolution where a state of zombification is actually something to be desired and aspired towards. The film grafts the zombie genre to the body-snatcher genre in that sense, recalling the pods of Invasion of the Body Snatchers (all three versions) promising freedom from worry and struggle in the life of a sheep. (The relationship to zombies and pop Christianity (communion = eat the flesh and blood of an undead entity and become a member of the flock, yes?) doesn't stop with the rush to genuflect before that gore-spattered big-budget exploitation film The Passion of the Christ.) It's tempting to shrug off Shaun of the Dead as just a finely-crafted, brilliantly-metered bit of comedy and light pathos, but in truth it's also something far wiser.

A terrible boyfriend, Shaun (Simon Pegg) works at a small appliance store where, Evil Dead fans take note, someone named "Ash" calls in sick a lot. Ed (Nick Frost), Shaun's slovenly best friend, spends his days in a cloud of flatulence and snack foods, playing endless Playstation and not taking down phone messages. When Shaun's long-suffering girlfriend Liz (Kate Ashfield) finally breaks up with him (mainly for his insistence on taking her out to the same pub every night), the end of the affair coincides with a zombie plague sweeping across the UK. It's a fine satire of our media, our questionable propensity for making lemonade out of atrocity (as Art Spiegelman offers: "The shadow of the Two Towers looms large, but it's getting smaller every day"), and our fatigue and surrender once it's all said and done. Amazingly, and in the film's vernacular, Shaun of the Dead is smart without being a prick about it.

Shaun wishes nothing more than to retire to his favorite watering hole with his mates and his bird, abandoning all responsibility to the sweet refuge of feckless ennui. In this way, Shaun of the Dead's a tricky beast that illustrates what's become something of a mini-trend in post-millennial cinema--specifically, the desire of some characters to retreat (return?) to a state of mute denial and apathy. While most of these films--Eternal Sunshine of the Spotless Mind, The Manchurian Candidate, The Forgotten--posit that forgetfulness is ultimately not to be desired and imposed upon the main characters, Shaun of the Dead offers a hero set that at least initially seems to aspire towards a state of comfortable listlessness. The final triumph, in fact, is a lazy, domestic tableaux planted in front of a television monitor engaged in a version of etherized tranquility. But what was suggested as ironic by the savage twist of Terry Gilliam's Brazil and literalized as a simpering equivocation in Steven Spielberg's Minority Report works in Shaun of the Dead as a quick comment on the ways that modern media tends to wring greeting cards out of seismic dislocations. That television is the opiate for the masses becomes tied to the idea, stealthy, that eyes staring in the dark at a movie's flicker are no less devouring--or mesmerized.

Seemingly cut from a different cloth altogether, John Waters's A Dirty Shame is perhaps most intriguingly read as an updating of David Cronenberg's sexual zombie film Shivers: Although the Canadian auteur's phallic parasites are substituted with the Baltimore auteur's knock-on-the-head slapstick, the core premise retains that essential element of ordinary people-turned-sex-crazed maniacs at the drop of the proverbial hat. Including George Romero's The Crazies under its umbrella influences, A Dirty Shame stumbles when it indulges in too much of Waters's hallmark drag childishness (grotesquerie is always interesting, just not the same one ad nauseum) but actually soars in a way that no Waters film has since fifteen random minutes sprinkled throughout Cry-Baby--especially in its casting of Jackass Johnny Knoxville as Christ-like Ray-Ray, the saviour of sexual deviancy. "Let's go sexin'!" replaces fishes and loaves as Ray-Ray leads a motley collection of Waters freak apostles (each of whom has been transformed by a good knock on the nut into specialized fetishists) seeking to transform the shut-thigh'd suburban "normals"--called "neuters" in Waters-speak--into hot-pants'd perverts.

The road to the second coming (pun intended) is paved by mousy, frigid housewife Tracey Ullman, wife to frustrated stud Chris Isaak and mother to mega-jugged biker-bar dancer Selma Blair, for her status as the twelfth apostle to Ray-Ray's church of kinky holds the key to not only a new way to copulate, but also the pearly-necklace gates of eternal ecstasy. The picture's extended conclusion of hordes of sex-crazed psychopaths terrorizing a convenience store, then a sleepy street, is as lawless and anxious as a good horror film, though in Waters's picture, the rapers and pillagers are the underdogs and the heroes. It's Dawn of the Dead if the ghouls were the lovable, misunderstood protagonists. (Day of the Dead is so effective mainly because it actually allowed this idea to find full flower.) A Dirty Shame, tellingly, has a strange amount of lore for something not necessarily intended to be a genre film. The concussion needs to be accidental, for example, and new concussions revert the converted.

A Dirty Shame distracts from its strengths whenever Waters's glee with celebrity defecation and horror/fascination with the vagina (the third or fourth time a character emerges from between labial bushes, watches start getting checked) overwhelms a satirical eye keen enough to dissect the hypocrisy and sanctimony fuelling our self-proclaimed guardians of good taste. At its best, the film is exactly what Cronenberg's Crash would have been like had the director of Pink Flamingos adapted it. Too bad that A Dirty Shame takes a good half hour to get going, employs clumsy CGI squirrels for no good reason but to raise the already disquiet spectre of Caddyshack, and, worst of all, despite the gradual homogenizing of Waters's technical style, demonstrates a scattershot, ADD attention to trenchant detail. But if it's irritating in a bad way, it's also irritating in a fruitful way--and from that madcap hit-or-miss mess emerges Waters's best film in a long time, as well as an interesting contribution in what appears to be a trend to redefine the zombie film along the lines of not slow vs. fast, but kicking-and-screaming vs. cross-eyed-and-painless. Backing gratefully into the cold embrace of oblivion (sitting back and turning off civilization along with the ol' noggin, as it were): how's that for scary? Originally published: September 24, 2004.

THE DVD - A DIRTY SHAME
by Bill Chambers New Line pulls out all the stops for their DVD release of A Dirty Shame, which, despite hype-free cover art, contains an, ahem, obscenely thorough feature-length making-of, two commentary tracks, and a fittingly nostalgic set of trailers. Furnished with its own chapter index and subtitle options, Mark Rance's bizarrely-narrated All the Dirt on "A Dirty Shame" (82 mins.) rounds up every pertinent member of the cast and crew--many of whom make up "The Dreamlanders," John Waters's stock company--for the dual purpose of celebrating this return to form for Waters and deifying the man himself, though at times it does seem most like a glorified crash-course in fetish nomenclature. ("White man's terms," actress Jean Hill scoffs.) By the same token, the piece is refreshingly uninhibited, with actress Tracey Ullman chiding co-star Johnny Knoxville early on for doing the "classic running in on my EPK" thing. Predictably, Selma Blair's expensive prosthetic breasts are a major tangent; less predictably, so is the casting of Suzanne Shepherd ("Big Ethel"), who became paralyzed with regret after signing on without reading the script. Interspersed with much grappling over the potential cynicism of the film and whether Waters has in fact gone (too) soft in his middle-age, this is easily the definitive contemporary profile of the auteur, besting A&E's recent Waters-centric episode of "Biography" by virtue of not having to cater to network standards and practices.

Though their generous face-time in the documentary renders a non-screen-specific group yakker by Dreamlanders Devra Kitterman (Greens Foreman), Pat Moran (Associate Producer & Casting Director), Vincent Peranio (Production Designer), Van Smith (Costume Designer), and Brook Yeaton (Prop Master) somewhat superfluous, there's surprisingly little crossover between Waters's interview segments and his commentary proper, in which discussion of the sight gags and one-liners gives way to poignant reflection on his growing sympathy with the Big Ethels of the world. For whom Waters made A Dirty Shame it's difficult to say, but throughout this cineaste-friendly dialogue we're reminded of Sergio Leone's axiomatic reason for continuing to crank out westerns despite his waning interest in them: "Nobody forgives success." These yak-tracks supplement a would-be outstanding 1.82:1 anamorphic widescreen transfer that unfortunately suffers from sporadic shimmer and edge-enhancement, though the exceptionally fun Dolby Digital 5.1 audio distracts us from any shortcomings of the image. (And it's not just the activity of the mix that impresses, but the quality of the reproduction as well.) A deleted scene--actually a naughty outtake also included in the doc--plus trailers for each of the Waters titles available from New Line (A Dirty Shame, Pecker, Pink Flamingos, Female Trouble, and Polyester) and ROM-based extras (the always-welcome script-to-screen interface, a dirty glossary, and weblinks) round out the NC-17 platter. New Line is concurrently releasing an R-rated edition to appease puritanical chain outlets--and as Waters laments in the doc, the MPAA has so much lobbying power that if they had the cojones to match, such elaborate measures wouldn't need to be taken. Originally published: June 13, 2005.