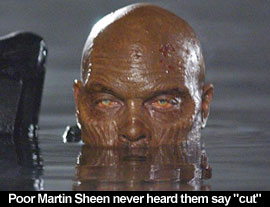 by Walter Chaw The weakest entry in George Romero's zombie quadrilogy by a long shot, the Toronto-lensed Land of the Dead loses the grit and familiarity of Romero's native Pittsburgh while managing to be every bit as awkward and allegorical as one of his trademark undead. The original concept for Day of the Dead was to have hundreds of trained zombies fighting one another in a post-apocalyptic landscape, a statement--and an eloquent one, as is, or was, Romero's practice--on war being an essential state of man that got scrapped due to budgetary concerns. With the success of films like Shaun of the Dead, 28 Days Later..., and the remake of Romero's own Dawn of the Dead, though, the primogenitor of the genre was given a respectable budget, the boon of CGI, and relatively free reign to continue a trio of films (Night of the Living Dead, Dawn of the Dead, Day of the Dead) that besides spawning a legion of Italian knock-offs, were themselves gory, scary, and razor sharp.

The first film remains a landmark civil rights picture, the second an insightful if overlong skewering of our consumer culture, the last an inquiry into racial/gender castes and the role of zombie religions like Christianity (undead saviour, communion through intake of flesh and blood of the same to be born again)--but they were all fascinating because the subtext was subtext while the text was people trying to avoid getting eaten by waves of their ex-neighbours and relatives. Land of the Dead's subtext is more misanthropic: It's not that a main character will say "We don't negotiate with terrorists" as the zombies, under the leadership of ex-gas station attendant Big Daddy (Eugene Clark, playing a character from 1950), do a million-ghoul shuffle on the human stronghold of Fiddler's Green--it's that Romero implies that we're already zombies and the brief flickers of defiance we do exhibit are doomed to be snuffed-out by the maddening din. Not a bad idea, if no longer as subversive as it once might have been; it's a shame that the execution is so bad.

Much talk about how many people will die should the tower fall shares time with a few brief shots of the interior of the human utopia that do nothing to advance the brilliant idea of setting Dawn of the Dead in a shopping mall. (Worse, it rips off the ironic PR infomercial from the opening of David Cronenberg's Shivers and has the residents of the Green inexplicably watching it on an endless loop--which is like listening to the time-share pitch after you've bought the time-share.) A money shot where a zombie rips a navel ring out of a young beauty's flat midriff inspires groans, but makes as little sense as chief baddie Kaufman (Dennis Hopper) hording great heaps of cash, Scrooge McDuck-like, in a post-Armageddon where the only commerce seems to be scavenging cigars and whiskey for the muckety-mucks. Outside the Fiddler's Green complex but within a walled, Manhattan-esque island city (joining Batman Begins' Gotham as the second such haven this summer), the lower-class humans bustle in a citywide rummage sale of sorts--a mess that hero Riley (Simon Baker) hopes to one day escape, retarded sidekick Charlie (Robert Joy) and ex-hooker Slack (Asia Argento) in tow. Standing in his way are Kaufman, ambitious hustler Cholo (John Leguizamo), Cholo's battle-SUV "Dead Reckoning," and legions of the newly unionized Dead. If you care by the end of it who lives and who dies to, presumably, join the undead civil rights movement, you're a braver man than I. Therein, perhaps, lies the point.

But the main problem of Land of the Dead is that it's lame. The battle-truck is lame, the zombies howling at one another and learning to use assault rifles is lame, Hopper is lame, Baker is lame, the gore is pedestrian, and Leguizamo has needed a punch to the neck for going on two decades now. The whole film is basically a series of people driving places, zombies shuffling places, and brief attack moments that were done better in the previous films despite seeming ripped off from them shot-for-shot. A scene in a club where zombies are used as entertainment has potential (how much better would the film have been had it focused in on the human's exploitation of the zombies?), but quickly veers to the lame when Slack is tossed in a cage with two zombies for the alleged sport of her Christians vs. lions dismemberment. Once saved, Slack moves off into the extreme background--the only character with any kind of resonance, in fact, is poor Charlie, who manages to maintain his dignity even though the bulk of comic relief is aimed at or is a result of his diminished mental capabilities. (The biggest laugh, however, is reserved for Kaufman's black valet, scampering off in traditional high-minstrel cowardice and leaving massah to his own devices.) Though wags will suggest that of course the audience for Land of the Dead most identifies with the retarded one, let me offer that Romero's work is so admired because he is whip-smart and, at his best, an extremely fine social satirist.

Without dread, without frights or gorge-busters or the wrenching loss of hale comrades, what's left is stilted, proselytizing dialogue and contrived situations that, boiled away, suggest a somewhat-shocking apologia for 9/11 and an endorsement for some kind of mad democratic system of eat and be eaten--a strange substitute for "work will set you free" as a slogan for a socialist regime, but one no less disturbing taken in context. Consider a scene of someone about to open fire on Big Daddy and his gang of revolutionaries before hero Riley steps in to say, "No, they're just looking for a place to go. Like. US." Tedious at best, it's lunch with the hippies for most of the duration, extolling the virtues of an unencumbered lifestyle "up north" while slamming capitalism and its inherent necrotic evils. Never mind the legion of slavering, flesh-eating monsters breaking down the gates. Land of the Dead comes full circle from Night of the Living Dead: it subverts our rooting interest from a band of humans fighting against assimilation to the mob of zombies fighting against annihilation--from the heroes with whom we can identify to the mindless horde, which Romero may suspect we've already become. Although it's fascinating when taken with the post-millennial cultural trend of entertainments that flatten society and rebuild it under the basics of animal logic, Land of the Dead by itself is a tremendous disappointment--the work of a legendary filmmaker crippled by his own legacy that has already said everything this film has to say on any topic, and with more effectiveness and focus by half again. Originally published: June 24, 2005.