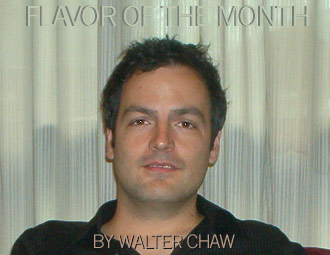 June 12, 2005|I met Greg Harrison on a sunny Colorado day. Lanky and stylish, if a little over-dressed for the temperature in black pinstripe-on-pinstripe, his appearance betrayed a man who's been living out of a suitcase and looking at the indistinguishable insides of hotels. In town to pimp November, his sophomore follow-up to Groove, Mr. Harrison has surprising heroes and an interesting story of how he got into the business; a shame that his film is an empty experiment in styles and homages that tend to titillate the festival audience--where November has found its momentum--but infuriate or bore the wider audience to which the picture now aspires. It looks great, but it's a gimmick stretched just barely long enough to fit the "feature" description. Mr. Harrison seems like a smart guy with a good, healthy respect for the history of alternative cinema. Here's hoping his next project is up to his speed.

FILM FREAK CENTRAL: So how does a Michigan State grad get all the way to here?
GREG HARRISON: (laughs) Well, I got an internship in LA after school to edit trailers for movies--did one for Scenes from a Mall...

The Paul Mazursky?
Yeah--did one for that that a lot of people liked and got a shot at being an editing assistant on stuff like Six Degrees of Separation. Was a fly on the wall at Amblin when they were doing Jurassic Park. A lot of disparate experiences that sort of became a way for me to learn how to tell a story through pictures--sometimes in a very abbreviated, capsule form--which led to my eventually getting a shot at Groove.

Tell me more about making trailers--did you get the whole film to work from?
I did. In fact, I was in on every single screening of every cut of the films from the beginning. Sometimes I'd work from dailies--but it was, again, a really interesting way to not only get to know how to tell a story in a very concise way, but to see how all of these great and established filmmakers pared down their own films into some kind of releasable shape. Hands-on film school.

Yet November is disjointed--a Run Lola Run kind of narrative with avant-garde interstitials.
That's true--and the structure of the thing is more to do with Benjamin Brand's screenplay than with something that I thought that I would be interested in, but after reading it, I was really drawn to that challenge of trying to present a fractured story in a way that was still emotionally coherent. The idea of a woman involved in a traumatic experience re-ordering her perceptions over the course of three short films struck me as a great way to further develop my craft and get me to where I want to be for my next projects whatever they might be.

Did Courteney Cox express to you her desire to stretch with this role?
She did. I originally met her while I was talking about doing a different project--an ensemble comedy that I was developing with Gary Trudeau that went into turnaround, unfortunately. But I had Ben's screenplay and showed it to her and she was really interested in talking through the emotional arcs that Sophie goes through. I learned a lot about her, including the directions that she would have liked to have gone in her career--[she] has been sort of sidetracked for a while by her TV work. She's serious about being taken seriously. She did this film without any kind of makeup--just foundation and a touch of lipstick--and her wardrobe was essentially flat and straight. A brave step for someone who's known primarily as being a beautiful woman, then a comedian.

Your heart: with editing or directing?
Directing, no question. Editing was always a means to get to directing.

You're with Indigent right now, why DV and not film?
Cheaper that way and as the new guy you need to work with smaller budgets to insure that what you want to make is what actually makes it to the screen. There's a lot of freedom with DV to play around, especially as an editor, but I'd love to work in film, too, down the line.

Since we're talking medium, tell me about the still photography in November.
Well, we, Ben and I, really wanted to explore the idea that the frame of a still camera is the same as the frame of memory, rather, of how we frame memories to make them fit into how we understand or perceive a situation. That there's always as much information within the frame as there is outside of it and that something like a split narrative like this would be a good way to explore that ambiguity.

How much was Antonioni an inspiration besides the shot or two that seem directly from Blow-Up?
Well, of course, he was a huge inspiration but more, for me personally, I wanted to pay a little tribute to Nicolas Roeg--particularly the opening sequence of Don't Look Now. The slide that Donald Sutherland looks at...

The broken mirror, the bleeding image...
Exactly right, the architecture, too--this mosaic idea of storytelling where you get all of these little pieces and it's up to you to find a place for them if there is a place for them. There is about Roeg's films this feeling that not everything needs to ever fall into place, but that the emotion of it is consistent is what's important.

The bleeding image appears in the first interstitial in your film.
(laughs) It does, indeed.

And the pulling of a message from a hole in the wall: a reference to The Tenant?
Yes! Exactly right. Polanski's another touchstone.

Lots of cell phone hate in your picture.
(laughs) That's more Ben's thing than mine, I think. He really hates cell phones. I liked the thematic unity that phones and phone messages provided the three pieces, though, the way that she gets a highly-distorted telephone message from what might be Hugh and then in a different reality we see Hugh making that phone call. But you're right, lots of punishment in store for people who have cell phones in November.

What have you seen that you've liked lately?
Not much--there's a big black hole in my movie watching with this press tour and with the fact that I'm getting married really soon, it's taken up all of my free time. I did watch Ocean's Twelve on DVD the other day and, man, it was just awful. I was really disappointed.

I like to think that Soderbergh funds his unpopular good films with popular bad ones.
That's probably pretty close to the truth. The problem though is that when films like that get popular it drives films that are loaded with ambiguity--like Roeg's pictures, for instance--into extinction. There's no confidence in the audience anymore and no confidence in the power of mystery. Everything has to have a reason now in movies, it has to have some kind clear, easily digestible explanation so that no one goes home from the screening audience scratching their heads. Nothing worse than people being confused, you know.

With no appreciation of how easily people tend to get confused.
That's right--and there's value in that feeling of confusion, don't you think? It's a valid human experience and it's been censored for the most part from the moviegoing experience.

Arguably, though, it was never in style.
That's probably true--but there was a time where a film like Blow-Up was given the opportunity to find an audience.

Do you think your film will get that opportunity?
I don't know. We debuted in Sundance and I find that the Sundance audience was particularly receptive to the kind of film that November is. They were very enthusiastic during Q&As, they really wanted to know what was happening in the film.

Which is contrary, isn't it, to your aspiration towards ambiguity?
A little, a little. We've gone around to a lot of festivals after Sony picked us up and we've gotten the same sort of reaction--but on the other side, we're getting a lot of hostile reactions to the piece, people who hate that there's no clear resolution and I fear that as it gets a wider audience with a wider distribution that that kind of reaction will become a more common one.

Have the critics been kind?
I don't read criticism of my films just for sanity's sake. I think that criticism has an important role, though, potentially in film history--it's just that so many people now look to it as a kind of journalistic comment instead of a critical one. I think that quantifying the merits of a film, sometimes of discussing a film's meaning, can be very dangerous to film as a whole and to that film in particular. Kubrick, though, for example I think courted critical attention by making his films wilfully ambiguous with the knowledge that a certain kind of eternity comes through that kind of consistent, prolonged critical examination.