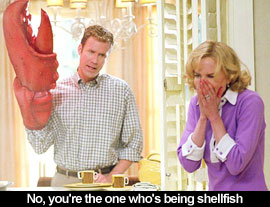 by Walter Chaw Five minutes into Bewitched I was sick to death of its cutesy, smarmy self-satisfaction. This is Nicole Kidman talking something like Marilyn Monroe crossed with a feather duster, doing her best to work her mouth around Delia and Nora Ephron's vapid dialogue while wishing all the while that someone would solve the mystery of how she could be so accomplished at picking independent projects (Birth, Dogville) and so incompetent in picking mainstream ones (The Stepford Wives, Cold Mountain). It's a movie completely dependent on the belief that everyone has seen the Sol Saks sitcom upon which the flick is based (a belief supported at least in part by the warmth with which a multitude of clips from said sitcom were received), meaning it's the picture for which the term "meta" was created. Not the endlessly replicating screenplay, but the fabled film that is about nothing, is based on nothing, and features big stars struggling to overcome the freakish inconsequence of a project that should never have gotten beyond the what-if stage. (Who outside of coma would even consider starring in a film written by the Ephron sisters, directed by Nora, and produced by Penny freaking Marshall?) This is the film that cotton candy would imagine because it cheerfully has no mind to speak of, making Kidman's freaky, alien, doll-like performance (her Isabel eats buckets of Miracle Whip in one of the film's concessions to its powder-puff inconsequence) a minor stroke of genius, if only in hindsight.

Jack (Will Ferrell) is a washed-out, egomaniacal star who, reeling from a series of big-screen duds, seeks refuge in a television remake of a beloved, sort of, television show. Meanwhile, Isabel (Kidman), a witch in the Kiki mold, comes to earth in a dusting of flower petals and makes house in The Valley after pulling a fast one on a hapless real estate agent apparently governed by what it says on her sign. It's satire, I guess, just like couching a show-within-a-film trope in a world where the ghost of Paul Lynde (Steve Carell) appears as a kind of perverse Virgil to Jack's Dante, leading him to bliss in--ironies greasing the pole fast and furious now--matrimony with a real-life witch! Just like the TV show that is a remake of a TV show that is in a film that is the remake of that same TV show! It's all so delightfully clever (and there's even a line in the script remarking how clever the script is) that you're likely to want to pluck out your eyeballs long before the sequence where Isabel casts a spell causing a giant "rewind" graphic to flash in the corner of the screen and for ten minutes of film-time to be erased and started over again. Too bad the new ten minutes doesn't include more of Michael Caine and Shirley MacLaine as Isabel's warlock pa and co-star, respectively: the two of them drive the film right into the ground not because they're bad, but because they're so good that you sort of feel sick that you're watching them in Bewitched.

Unspeakably tepid as showbiz satire and uncomfortably flat as broad comedy, the piece has no weight whatsoever--and without weight, there's nothing to anchor the self-congratulatory machinations. Beginning as slapstick, it veers, as Ephron projects invariably do, to light magic realist romantic comedy in the end, the two genres (and a third, fish out of water--though as we're never given any insight to the proverbial water, there's no delight in seeing the proverbial fish flop about) coexist uncomfortably, leading to an end product so listless that its sloth is almost vile. Bewitched is the pinnacle of a certain kind of anti-entertainment, the filmic equivalent of eating celery in that it's more than empty calories, it actually sucks energy from the viewer. All you'll ever get out of it is everything you bring to it and, for all that, it'll you leave a little less than you were. Bewitched is one of the worst films of the year, not because it's incompetent (which it incidentally is), but because it's somehow made being vacuous and accepting the sole prerequisite for membership in the culture. As I still love this culture, I well and truly hate this film. Originally published: June 24, 2005.