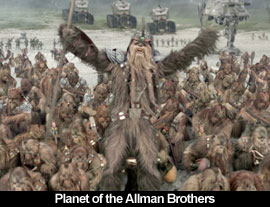 by Walter Chaw SPOILER WARNING IN EFFECT. It's not quite as bad as Episode I or Episode II, which is to say that it's not uniquely bad, just run-of-the-mill bad. The dialogue, ghost-written by Tom Stoppard, isn't always unspeakable, and the performances of Hayden Christensen and Natalie Portman aren't nearly as wooden as they were the last time around. (Well, Christensen's isn't, anyway.) This lack of cheese presents its own set of problems, however, as Star Wars: Episode III - Revenge of the Sith (hereafter Episode III) is a lot like watching paint dry, with the manic light shows coming off at best as some slack particulate hustle. The picture's action sequences are chaotic, for sure, but just because everything is moving doesn't mean it's exciting, too. Though George Lucas may be a pretty good technician, he's still not a good director, and the pacing of Episode III is mortally, if predictably, off. Perhaps there's comfort in consistency.

For the unenlightened few, Anakin (Christensen), Jedi apprentice to Obi-Wan Kenobi (Ewan McGregor), is a powerful warrior/mystic saddled with a prophecy that says that he will restore balance to "The Force." Given that these films begin with the balance of power squarely on the "light" side, what with the sombre Jedi Council acting as the galaxy's peacekeepers, shouldn't someone somewhere along the way have wondered what benefit there could be to "balancing" such benevolence with an equal portion of malevolence? Turns out that the way Anakin will fulfill his destiny is by slaughtering almost all of the Jedi Knights--which is to say that he kills a handful of them and the "clones" of the second film's title finish the job. Along the way, Lucas continues to make his original trilogy of Star Wars films anachronistic by rendering lines like Ben's "Nobody's called me that since long before you were born" from A New Hope or Leia's gauzy, romantic memory of her mother in Return of the Jedi obsolete and destined for revision the next time Lucas decides to digitally mutate his babies. What breaks my heart the most is that the one person in every conversation with the least respect for the legacy of this celluloid mythology appears to be Lucas himself: he's the one, after all, who doesn't seem to have been paying attention.

Thanks to the perfunctory ease with which many of the film's conflicts are resolved, Lucas's sixth foray into his galaxy far, far away feels like the universe's biggest anti-climax. The Jedis are remarkably easy to kill (grand fiend Count Dooku, likewise), and without anything like a human centre (or villain) in the picture, it's amazing how little it matters that the settings are indeed spectacular. With a trio we actually care about, a desert in Tunisia or an arctic glacier can become exotic locales fraught with peril and possibility, but here, millions of dollars worth of top-of-the-line CPUs working overtime to stretch the virtual landscape produce busy flatware for a flavourless stew.

Charges that the acting was equally bad in the original trilogy are as easy to dispel as popping A New Hope in for a spin: the humour was never forced with Harrison Ford, Mark Hamill, and Carrie Fisher; the humour is never intentional for Christensen, Portman, and McGregor. Though the conversations between Anakin and wife Padmé (Portman) no longer suggest high school composition class, the sentiments remain as trite and airless as a 19th century chamber drama. Just like, in fact, when you consider that once it's revealed to Padmé that Anakin has turned to the Dark Side, Padmé, despite the genocidal evidence of the second film, protests the impossibility that her lover is capable of such a thing before collapsing in a quasi-Victorian faint that leads, eventually, to her wilting death from a Bronte/Austen "woman's" ailment. Lucas's attitudes towards women are as antiquated as his attitudes towards minorities, the sad product of being sequestered away in his Skywalker Xanadu with fawning yes-men as his only reality filters.

The film includes another sequence in congress (C-Span: Episode III) where the evil senator Palpatine (Ian McDiarmid) declares himself the emperor of the freshly-minted empire; another badly-disjointed narrative that sends characters hopping from planet to planet for God knows what reason; and several more extended, deadening conversations in which Palpatine and Anakin talk really slowly and quietly about absolutely nothing. Sprinkled in there is finally a motivation that makes a little bit of sense in the promise that the Dark Side might allow Anakin to shield Padmé from pain. Frankenstein, in other words, rears its thematic head here and later when the newly-created Darth Vader jerks off his gurney to ask after Padmé (just like the world's baritonest little girl) before throwing his hands up to the heavens in melodrama's favourite "NOOOOOOOO" aspect. In the picture's defense, besides there being only a couple of mute Jar Jar Binks sightings, Episode III is so remorselessly violent that it begins to resemble a zombie movie by the time Anakin's fate is decided. Yet the multiple beheadings and rampant de-limbings have a curiously antiseptic flavour--they're neither set up properly nor executed with any kind of weight. (Whoops, there goes me arm!) Compare any one of the picture's maimings--especially the fate of Mace Windu (Samuel Jackson, badly miscast)--to the still-powerful, nightmarish lead up to Luke's disfiguration in The Empire Strikes Back and consider how far the franchise has fallen.

But what truly drives a stake into the heart of the thing is the hypocrisy and anger of the film. Every single Jedi Knight, at the moment of their greatest crisis, betrays that which they most believe in by succumbing to rage and vengeance. Instead of bringing Palpatine to trial, Windu decides to go vigilante and collect the old guy's head, while Obi-Wan turns his back on Anakin as he endures unimaginable--and graphic--torment. I grew up thinking it was noble and good to walk the "light" path, and I wonder what this new generation Lucas is targeting will grow up to believe. First Lucas turns The Force into a blood condition (though he's thankfully abandoned the "virgin birth" idea from Episode I), now he turns the Jedis into dishonourable thugs with loose philosophies, thereby softening Anakin's descent into "evil." The only joy left in the film is a brief (and useless, and puzzling: "Miss you, I will, Chewbacca," says Yoda--what are they, lovers?) cameo from Chewbacca and the births of Luke and Leia, a scene unfortunately made silly by Portman and one of the more unfortunate robot lines in the sextology. But in the end, I don't know if it's the product of being forcefully disillusioned for two films or that Lucas is simply that poor a director, but save a couple of bridging moments old-school fans such as myself can't help but get all a-tingle over, the only gestures Lucas seems to elicit anymore are deep sighs and weary shrugs. The magic died a long time ago, see, and Episode III is just the death twitch. Originally published: May 18, 2005.