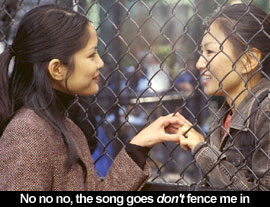 by Walter Chaw SPOILER WARNING IN EFFECT. Lesbians are pretty much invisible in American culture--banished, actually, to the ghetto that gay men tend to complain about even though, in truth, gay men were never more visible than they are now that they've been gifted with the lofty honour of being the only minority everyone can agree to hate with hilarious impunity. A couple of programs on Showtime notwithstanding, lesbians in the popular conversation are still either flannel-wearing she-males, the other daughter, or male fantasies of the voracious woman desperate for a good therapeutic dick to set her back on the straight and narrow. When a lesbian appears in a Western film (like in Bridget Jones: The Edge of Reason), the audience, myself included, regards her appearance as a kind of alien visitation. For a while, it's possible to forget that she's a sexual creature at all, so foreign are her Sapphic ways in our cultural conversation. Thus a pair of films featuring lesbian heroes front and centre happening upon these strange shores almost simultaneously is cause for some sort of modest celebration despite that one of them, Alice Wu's Saving Face, is a lot like an ethnic sitcom and the other, Alexandre Aja's High Tension, appears to hate lesbians with an unusual ugliness.

Saving Face, the hyphenate debut of former software programmer Wu, finds widow Ma (Joan Chen) mysteriously pregnant at 48 while her surgeon daughter Wil (Michelle Krusiec) is awakening to the love that dare not speak its name under the tender ministrations of hot ballerina Vivian (Lynn Chen). A parallel tale of forbidden desires under the proverbial Chinese elm, Saving Face has the strength of Wu's ear for how Chinese people talk to one another--of how they're virulently racist, caste-obsessed, clannish, and often tradition-bound (repressed, irritable, nagging). Just like you and me, in other words: they're prone to gossip and have enough skeletons in the family closet to choke a terrier; thank the maker that not a one of them knows kung fu or passes out magic fortune cookies. In no time, however, the picture does become something of a neo-Jane Austen, complete with a matchmaker's ball and a scene where Ma's dad (Jin Wang) lectures his wayward daughter on dishonouring the family name.

The set-ups are obvious if sweet, the conflicts are contrived (how mad can you really be if your girlfriend can't meet your bohemian friends because she has to stay late at the hospital performing open-heart surgery?), the resolutions are perfunctory and unconvincing, and the performances are uniformly exceptional--all of it adding up to a minor bauble whose claim to eternity is the courage to be queer even if the film doesn't also have the courage to confront what that queerness means, especially in a society it so meticulously describes as rigid and uncompromising. (Largely unpaid debts to The Graduate, by the way, don't go unnoticed.) For just two moments, though, Saving Face is almost worth it: the first a line--"One billion Chinese people, two degrees of separation"--and the second a scene in a video store where Ma discovers that her options for Chinese representations in American cinema include her own The Last Emperor, The Joy Luck Club, and porn.

A better film in almost every technical regard is Aja's High Tension, a carbon copy of Dean Koontz's pot-boiler Intensity, although High Tension, partially dubbed and pared down to avoid an NC-17 rating, has taken the tactic that lesbianism is the root of evil--that it's akin to a psychologically disfiguring sexual disease, and that (and here's where the spoiler-sensitive may want to stop reading) all any girl wants is a nice big penis with which to penetrate and be penetrated in turn. But that's the twist--up to the twist, High Tension unfolds like a Dario Argento giallo with ludicrous and mesmerizing murder set-pieces, high on gore and low on reason. Just like it oughtta be.

Marie (Cécile de France) is visiting schoolmate Alex (Maiwenn Le Besco) at Alex's family's home in the French countryside when a mad dog serial killer (Philippe Nahon, the deviant in Gaspar Noé films) slaughters Alex's family without realizing that Marie is holed up in the attic guest room. With Alex trussed up like a hog in the back of the killer's truck, it's up to Marie to notify the authorities or, failing that, to save her friend herself. The picture opens with Marie's dream that she's chasing herself through a French wood (shades of the underestimated Gallic horror flick Deep in the Woods)--and then the picture really opens as she masturbates after spying on Alex taking a shower and reaches her climax at the moment the killer knocks on the door. High Tension is angry candy: a beautifully shot, loaded text that, at some point late in the game, takes an unbelievably misanthropic, unfortunately political turn away from the usual sexual undertow of slasher cinema into a whole new stratosphere of gay-bashing and dangerous presumptions about lesbian sexuality.

The twist is that petite Marie is actually the killer (a reveal that should have waited another five minutes, until after the rescue sequence and Alex's would-be inexplicable hysteria) and the manifestation of her ambiguity is a hulking man armed with straight razor and, in its homage-laden final twenty minutes (the picture pays tribute to The Texas Chain Saw Massacre and, fascinatingly, The Texas Chainsaw Massacre II), a giant car-wrecker chainsaw. Marie's repressed sexuality--her "dyke-ism"--is therefore represented in the picture as a giant, disgusting male sex killer who uses various weapons as phallic substitutes. Marie's lesbianism, should we extend the trope, is responsible for destroying her object choice's family, for betraying her trust in the most animal kind of way, and for leading to the further castration of a potential male suitor (and potential saviour) whose cigarette dangles impotently from his lips as death comes calling. The battle royale near the end of the picture between Marie and her lesbianism is obsessed with obscuring and damaging the face--enough so that it becomes clear that what's actually at stake in this picture is the self-image of a gay girl tired of the judgment of the majority society and afraid that the girl she has a crush on doesn't swing that way. The twist works thematically, but it doesn't work contextually. (Marie can't move a bureau to get to a telephone, but he-Marie can use a larger bureau with sufficient speed to decapitate/castrate daddy, for just one example; Marie and he-Marie drive two different cars simultaneously on two separate occasions, for another.) It's a reason along with the picture's dubbing and elisions to downgrade the literal experience.

We meet Marie-the-killer as he's getting a blowjob from the severed head of one of his previous victims (something we've seen before in Bloodsucking Freaks and Bret Easton Ellis's American Psycho (though not in the misguided film version)), and then in the end we see him again, his face destroyed, hunting down Alex and asking her if she loves him while standing over her and thrusting his chainsaw at her face. The heroine of The Texas Chainsaw Massacre II addresses an identical situation by gently stroking Leatherface's malfunctioning Black & Decker member; the heroine in High Tension (not who we thought initially, the real twist) responds to the situation by returning Marie's kiss before skewering her with a tire iron, leaving the two of them essentially en flagrante, cowboy-style, with the pinioned Marie promising that nothing again will ever tear them apart. Ecstasy for Marie and not rage at betrayal, this ultimate moment of penetration becomes validation of her lust and a justification of High Tension's interpretation of lesbianism as women wanting pricks with which, naturally, to prick one another and be pricked in turn. The final image of the film, with the audience inserted for a second time as the floating point-of-view of an imaginary or unseen/-seeable presence, is literally Marie reaching for the reflection of herself: Narcissus and Echo, drowning in pools of signifiers.

What's at the heart of this male- scripted and directed picture but an intense fear and essential misunderstanding of the alien-ness of lesbianism--of the sexual mystery of women magnified twofold by an inward interest that would drive Jungians mad with its images of warrens honeycombing the soft underneath into eternity? It's a mean, ugly, sophisticated slasher with an arrested, maybe tortured, loathing for the conclave of the "weaker" sex--something that undermines the essentially feminist genre (who always wins? Jamie Lee Curtis--and we, an audience of adolescent boys, always cheer) in a way that is simultaneously interesting and plebeian. High Tension is essential viewing even in this watered-down form for the strong-gorged student of the form as an example of, if nothing else, the attitudes that keep lesbians a little farther back in the closet. Boys will be boys. Originally published: May 27, 2005.