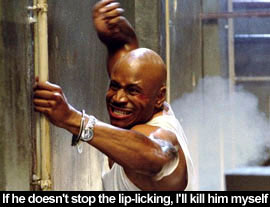 by Walter Chaw Based ever so loosely on Agatha Christie's And Then There Were None, Renny Harlin's latest disasterpiece finds the Finnish fool at the helm of a slasher-cum-"CSI" episode, oiled-up and ready to apply a dangerous level of nihilism in the pursuit of cheap thrills and bad splatter effects. In Mindhunters, a few of the FBI's finest criminal profilers-in-training congregate for one last test under the Al-Pacino-in-The Recruit tutelage of crackpot Harris (Val Kilmer) at a remote military facility that's home to a phantom cinema where The Third Man plays on an eternal loop.

Once there, the recruits chew scenery, step over one another's lines, and generally make a nuisance of themselves until the mystery murderer does us all a favour and dispatches with them--often messily. Sure, one of them is the culprit--maybe the devil-may-care Brando impersonator J.D. (Christian Slater), or buff internal affairs officer Gabe (LL Cool J). Maybe it's tough-talking Latina Nicole (Patricia Velasquez), or Sara (Kathryn Morris), the girl with a secret past. Better yet, how 'bout the guy in the wheelchair (put there by the crippling weight of the chip on his shoulder), Bobby (Clifton Collins Jr.), or the southern fried cheeseball, Lucas (Jonny Lee Miller), who bears such a remarkable resemblance to the remaining cast members that it's better to just lump the lot of them under the "white guy" aegis. Mindhunters, see, isn't so much a crime procedural as it is a cheap horror flick. You can tell because interesting characters and narrative logic both take a backseat to a leering fascination with gore that would put off a first year medical student.

What Mindhunters is really like is Real Genius set on an island where clever Gabe does a crossword puzzle that contains as one of its answers "Elba." (See, Napoleon was exiled to an island once, too.) Mindhunters is that rarity of a film that's trying hard to be very clever, earning a little bit of credit for the effort even when the intellectual straining results in a none-too-obscure reference to "Croatoan" and the vanished Roanoke colony--sly allusion to "Ten Little Indians" (And Then There Were None's alternate title), perhaps, but a squandered tease that the film is on the verge of becoming a haunted Indian burial grounds/angry spirits intrigue.

In other words, it's not garbage of the unfiltered kind like, say, xXx: State of the Union, or Monster-in-Law, films with nothing on their minds except how best to sap money from their victim demographics by pandering to what's worst and most convenient in human nature. Rather, it's garbage of the potential camp-classic kind, tempting its monkeys with acid-laced cigarettes and having its characters recite interminable monologues that make Phoebe Cates's Santa story from Gremlins the model of brevity and coherence. The real shame is that the high-concept premise--the hunters become the hunted--doesn't stop these people from acting like boobs, stumbling into Byzantine traps like freshly-birthed fawns, or getting themselves trapped in freezers. The most telling part is when the killer leaves them a long number sequence as a clue and only one of them is interested in deciphering it--and barely, at that.

Still, credit where credit is due for offing almost everyone with a disgusting, if not terribly inventive, zeal, for turning a Val Kilmer mannequin into a literal puppet, and for having a surprise twist ending that results in the stupidest Mexican standoff in the history of such things. I was impressed by Kathryn Morris's freaky ability to stay absolutely still and corpse-like for minutes at a time, as well as by Slater's ability, between this and Alone in the Dark, to make me feel sorry for a guy who's getting paid to star in movies. Mindhunters is unapologetically awful in nearly every measurable sense: it's obnoxious, loud, and poorly- written and performed, with its many sins magnified by its obvious desire to be taken seriously. It's hard not to admire the lack of self-knowledge that goes into something like this (although it was shelved by the Weinsteins for a couple of years in an act of Prozac Nation wisdom): it's the same pioneering spirit and aggressive naïveté that sent Lewis and Clark up that river. God bless America. Originally published: May 18, 2005.