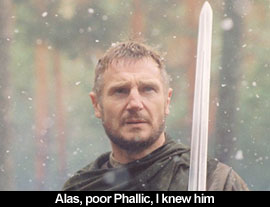 On the other side is Obi-Wan-ish Saladin (Ghassan Massoud), gifted with the film's great rejected tagline: What's Jerusalem worth? "Nothing...and everything." And indeed, Kingdom of Heaven is a whole lot of nothing about oh, you know, that thing that happened in olden times where a bunch of power-hungry white men, leading armies of destitute peasants, went a little God-crazy and invaded the Middle East on a moral superiority kick. (The gold wasn't bad, either.) But as goody-two-shoes Balian constantly takes the moral high ground until he's lovingly buffed into a blinding white sheen, the picture has nothing in its pretty little head except how his goodness is its own reward--that and the bed of queen Sibylla (Eva Green, the Gallic beauty of Bertolucci's The Dreamers). Scott shoots Kingdom of Heaven like the world's longest and most inscrutable luxury car commercial, pretending along with screenwriter William Monahan that when Balian declaims "None of us took Jerusalem from the Muslims!", a splashing of the perfumes of Arabia can wash clean those hands. The bulk of the outrage is reserved for a sleazy bishop whose every proclamation is greeted with a roll of the eyeballs and a righteous rebuke ("Thank you Bishop, you've taught me so much about religion"), often enough that he should have been fitted with goat horns and a "kick me" sign.

In the end, Kingdom of Heaven is the story of a little boy who learns to be a man. Sort of like Star Wars with fewer Wookiees, or Joseph Campbell without balls. A shame that Balian's transformation happens in the first ten minutes of a 145-minute film--once his wife kills herself and Balian semi-embraces a divorce from God, his secular humanism is firmly installed, never to be shaken again come hell or high water, literally. The rest of the film, then, becomes an interminable wait for everyone else to figure out what we already know whilst lounging in decadent environments. More, it dances around real issues until it's actually kind of exhausting in its studiously boring way. The battle scenes are simultaneously truncated and extended, tons of the same old mainframe razzle-dazzle that ironically valorizes the otherwise demonized white invaders while throwing masses of otherwise valorized Muslims under the wheels in what could only be an epic action filmmaker's racial reflex action. But there's nothing to get up in arms over with Kingdom of Heaven, except maybe that there's nothing particularly offensive in a picture about one of the greatest offenses in the history of human civilization. Leave it to the liberals to make a film so afraid to offend that it pisses everybody off. Originally published: May 6, 2005.