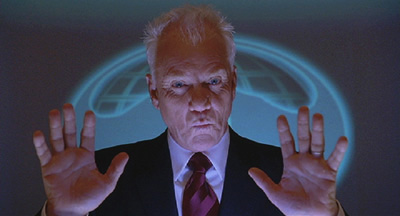 by Walter Chaw A film about what happens when Benjamin Braddock decides to pursue a career in plastics, Paul Weitz's flawed In Good Company (its title, formerly Synergy, may be the worst thing about it) boasts a distinct human quality that lends depth where there might not otherwise be any. It's bolstered by the central trio of performers: Topher Grace, continuing his winning streak; Dennis Quaid, affecting in the kind of role that Harrison Ford should be doing now instead of Indiana Jones; and Scarlett Johansson, rapidly growing into something like a national treasure. And though Weitz is too in love with the extreme close-up, his tactic of displacing his characters in various visual terrariums does a good job of suggesting just how isolating it can be to balance breaking your back for a job you don't particularly like with enjoying the people for whom you do it in the first place. At its heart, In Good Company is a love song to hoary old axioms concerning love, loyalty, and honour--its charms are old-fashioned and its bromides, if not entirely unexpected, are at least earned.

Dan (Quaid) is a veteran ad man at an ersatz SPORTS ILLUSTRATED whose ownership entity has been purchased by a mega-conglomerate run by an ersatz Rupert Murdoch media tycoon with the Kafkaesque moniker Teddy K (Malcolm McDowell). (The joke of McDowell's uncredited cameo being what happens when Alex de Large becomes the owner of the biggest brainwasher in the universe.) A corporate shakedown takes place, leading to mass firings (and a seriocomic montage of the same) and to Dan getting demoted in favour of young turk Carter (Grace). To the film's credit, the Oedipal set-up of Dan's boss being a kid almost the same age as his own daughter, Alex (Johansson), stays mostly in the subtext, while the contrivance of a romance blossoming between Carter and Alex is handled with a few moments of elbows-and-angles courtship that deserve a film of their own. When Alex offers "I feel funny" in response to receiving a gift from Carter that's a little too expensive for a first-year NYU student, she says it in a way that feels so off-guard and unaffected that you're almost embarrassed for your voyeurism.

There are a lot of little moments like that sprinkled throughout the picture, enough so that once the inevitable dramatic tensions begin to crop up (a dressing-down of the suitor, a public questioning of the corporate godhead), In Good Company's built up a measure of forgiveness. It addresses like few American films do the difficulty of making and maintaining a living in a swiftly-tilting economy, the shrinking corporate universe that's resulted in monopolies in fact if not in name, and the financial tightrope of second mortgages and a credit card dependency. In the same way, though not quite at the same level of success, In Good Company is a snapshot of the moment as The Graduate was thirty-eight years ago: a diary of a young hotshot (Ben/Carter) taken under the wing of an older mentor (Mrs. Robinson/Dan), introduced directly or indirectly into a world of sex, money, and, ultimately, the responsibility to be true to yourself, even if that leads to a little uncertainty in the short term. The lesson of In Good Company is that while you can't predict the arbitrary indignities and calamities of life, you can at least be a victim to them comfortable in your own skin. Originally published: December 29, 2004.

THE DVD
by Bill Chambers Universal releases In Good Company on DVD in competing widescreen and fullscreen editions; we received the former for review. At first, the 1.85:1, 16x9-enhanced image looks remarkably clear and HD-like, but it gradually becomes apparent that a significant amount of edge-enhancement has been applied to boost the impression of detail. (More than anything else, it creates video noise.) It's a shame, as the presentation excels in other areas, and it's very well compressed. Conversely, for better or worse, nothing stands out about the Dolby Digital 5.1 audio, which reproduces a run-of-the-mill comedy mix with adequate clarity. On another track, actor Topher Grace joins writer-director Paul Weitz for a respectable feature-length commentary in which they mock Grace's Agent Smith-like attire and mutually confess to making the film in partial tribute to their respective fathers. Given In Good Company's small-screen aesthetic, it's ironic that Weitz lets out a sigh of relief that Grace (late of "That '70s Show") didn't need to break any "TV habits," although he has grown enough as a filmmaker to have developed theories of camera movement, such as that left-to-right pans possess a more "melancholy air."

Other extras include seven webisode-style featurettes organized by the letters of the word "synergy." These mini-docs tend to be compact to a fault, cutting off just when they're getting warmed up, though the Dennis Quaid love-in "Stars" (3 mins.) ends amusingly, with Grace cracking that they need to keep copies of Innerspace and Enemy Mine on set to soothe his savagely narcissistic co-star. In "Youth" (3 mins.), Johansson joins the fellowship of Freud in saying that the film reminds her of her dad, while "Getting Older" (2 mins.) finds Quaid bragging that he's not as old as his character. "Real Life" (4 mins.) dips a toe inside the real-life offices of THE SPORTING NEWS--whose higher-ups praise Quaid's interpretation of a magazine marketing exec--before cutting to something of a non sequitur in which a couple of businessmen flaunt their money at the Palm in Las Vegas.

"New York Locations" (3 mins.) follows Weitz around New York City for a day as he orchestrates insert shots and has Johansson pelted with tennis balls. ("I'm calling SAG!" she shrieks good-naturedly.) "Editing" (4 mins.) lingers in the cutting room over the shoulders of Weitz , editor Myron Kerstein, and producer Andrew Miano as the three deliberate over whether a couple of "Leone close-ups" have overstayed their welcome; here, we also receive a defense for the elision of an accidental but curiously appropriate Death in Venice homage assigned its own chapter elsewhere on the disc. Wherefore art Weitz's brother/erstwhile co-director Chris, you ask? He shows up in the final piece, "Story" (4 mins.), looking and acting confused as to what his role in the production entails. Meanwhile, Paul Weitz leaves no stone unturned in optional commentary for 10 deleted scenes, most of which belonged to the first third of the movie and were sacrificed to get Carter over to Dan's house sooner. Cast and filmmaker biographies/filmographies round out the platter. Originally published: May 19, 2005.