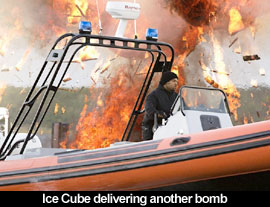 by Walter Chaw Just a total waste of life no matter how you slice it, xXx: State of the Union is cinema as penance. Forget the rosary--watch this colossal turdbath a couple of times and short of actually being responsible for it, you're instantly absolved of most any sin. The screenplay, by the suddenly-ubiquitous Simon Kinberg (also the scribe behind the upcoming X-Men 3, Fantastic Four, and Mr. and Mrs. Smith--let me go on record first saying that this film does not bode well), is a foul compost of flaccid catchphrases and boggle-eyed declarations, squeezed like old cheese between action sequences so poorly conceptualized and executed that not only is it impossible to ever tell for a moment what the hell's going on, but the film also actually reminded me in its over-processed way of outtakes from Tron. Ice Cube is awful, Samuel L. Jackson (who used to claim he would never work with a rapper) is awful, Scott Speedman is awful, Sunny Mabrey is awful--everyone is awful. Everything about xXx: State of the Union is awful, from its stupid prologue on some dairy farm to its stupid epilogue, in which another sequel is set up in as many words. It's possible to see the entire exercise as a postmodern smirk, but being aware that you're stupid doesn't always make you meta--sometimes it just means you're tragically self-aware and no less stupid.

"2 Fast 2 Spurious," xXx: State of the Union spends a couple of lines of dialogue explaining that the Vin Diesel super-agent from the first film has been killed and that erstwhile Trautman, NSA Agent Gus Gibbons (Jackson), must go "further outside the grid" to find a new Rambo, here scowling convict Darius Stone (Cube). At stake is the fate of the United States' executive branch, as evil Secretary of Defense Deckert (Willem Dafoe, learning nothing from the folly of Speed 2) plots for a bigger office by staging a coup and conspiring to frame, oh, I don't know, whatever unlucky soul happens upon his plot before he has a chance to execute it, I guess. It doesn't matter anyway because the only thing people who like this garbage will ever offer in its defense is that they were complete idiots to it, happily shoving popcorn down their gullets with the glassy-eyed gaze of the wilfully retarded. The tart from Species III shows up as cleavage trying to kill our boy while Nona Gaye plays a female mechanic to whom Cube will graciously refer as the best ride he's ever had--better even than the tricked out roadster director Lee Tamahori shoots with exactly the same sexualized leer. Weird? Sure. But it's also wise about the chicks-on-bikes magazine demographic that'll show up for this movie to kick seats and bark like dogs when a running joke about killing "that bitch" instead of just hitting her with a gun butt is finally given its punchline.

The chief benefit of the perceptively-titled xXx: State of the Union is that it gathers, for two hours at a time, all the people in your community from whom you'd like a two-hour break. It's a salt-lick for under-hung jackasses--car porn that features one woman shot in the back and another while she's defenseless and on the ground, with the marauding hero strutting around as a bulletproof fantasy of domesticated blackness the whole time. There's a big truck, a couple of tanks, a trio of helicopters, and as its climax, it features a presidential bullet train shooting through the heart of Washington D.C. at roughly mach 4. It's calamitously loud, edited like a primer on how not to edit, and in a just universe, it would be the last nail in the coffin of Ice Cube's precipitously falling career. But this isn't a just universe--this is a universe where a critic is "out of touch" if he doesn't like a piece of shit that happens to earn an extraordinary amount of money, where it doesn't make an ounce of difference if it's actually something anybody involved in the film would want to see as long as you pay a few bones for the privilege of siphoning your life away before its awful majesty. Feckless, vile, and--in the wake of ballsy ruminations on violence and genre like Sin City, Head-On, and Old Boy--not even exciting or affecting in any meaningful way, it's the foetus in the pickle jar in the sideshow tent: impotent, grotesque--and ultimately more than a little pathetic for everyone involved. Save your two bits for a shave and a haircut. Originally published: April 29, 2005.