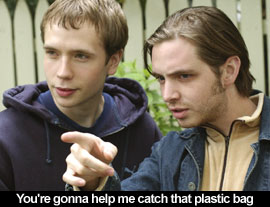 by Walter Chaw So reserved that it's almost invisible, Josh Sternfeld's Winter Solstice is an illustration of what it's like to be completely incapable of accessing one's emotions. It's a response, I can only guess, to over-scripted and maudlin independent pictures--and as a finger-wagged, consider it a point-taken. Still, if I have to sit through another family dysfunction picture (ironically what most people think of when they think of an indie "genre" film), I'd prefer to watch one that provides some kind of insight into my life or, failing that, resolution for the lives of the characters in limbo. It's not that I abhor ambiguity, understand, it's that Winter Solstice is more absent than ambiguous--almost a Warholian exercise in nothing happening whatsoever for a really long time. Maybe it's a mirror held up to our own disconnection with our emotions; and maybe that mirror would be better served held underneath the film's nose.

Jim Winters (Anthony LaPaglia) is the grieving widower and his two gawky boys, Gabe (Aaron Stanford) and Pete (Mark Webber), are a blue-collar Joe and an undisciplined high school student, respectively. We learn, Door in the Floor-like (not to mention A Home At The End Of The World-/Ordinary People-/The Upside of Anger-/Imaginary Heroes-like) that there's lingering trauma from the death of a loved one, and once spinster Molly Ripkin (Allison Janney) moves in down the street, we know from long experience that she might have the right spark to rekindle Jim's flame. It's embarrassing that the family's name is "Winters" and that the picture's title is Winter Solstice--just as it's embarrassing to be forced to note that the solstice is the longest, coldest night of the year and that our three sub-vocal menfolk are engaged in their own little emotional ice age. I'm not certain, though, for whom exactly it's embarrassing, since there's little doubt that Sternfeld is probably pleased that no one has missed his brickbat metaphors and intent in such passages as the one where landscaper Jim tells Molly that tending to a garden is harder than planting one. (And there's little doubt that people going to see Winter Solstice on their own impetus are hungry for this sort of stately, bold-faced upper-middle class chamber drama.) So the boys are overripe on the vine, the one leaving town and leaving behind clear-eyed Stacey (Michelle Monaghan, a find) and the other trickling his life away on being a distraction in icky Mr. Bricker's (Ron Livingston) history class. The boys aren't the only ones in need of pruning.

But for as gravid and navel-gazing as Winter Solstice can get, it's Shakespeare compared to Scott Smith's lugubrious, tedious, derivative, pointless Falling Angels, one of an apparent gross of Canadian dysfunction dramas gathering well-earned dust on a shelf somewhere following its unveiling at the Toronto International Film Festival. Like most Canadian films not directed by David Cronenberg or Atom Egoyan (as well as a few that are), it sees sex as an aberrant behaviour that deserves to be rewarded with self-loathing introspection, necrophilia, lycanthropy, pedophilia, incest, or lengthy political dissertations (en flagrante, no less)--and it's never done as a cold shower, but rather as a vasectomy and a series of painful hormone injections. Canadian cinema isn't one where the sexual act is punished slasher-film style, it's one where sexual desire is disgusting and sexual gratification is akin to a form of mortal weakness--making the national cinema chilly, defensive, and divorced from human emotions for no reason I can discern other than as a collective reaction against hedonism. A nation's worth of films directed by folks as niggardly and reserved as Japanese fathers results in stuff like Falling Angels.

Dosed-up, catatonic Mary (Miranda Richardson), the materfamilias of three daughters (tomboy Lou (Katharine Isabelle), sexpot Sandy (Kristin Adams), and ugly duckling Norma (Monté Gagné)), squats on her gaudy sofa like a distaff King George on his mad throne. Her husband is ineffectual Jim (Callum Keith Rennie, the Tom Cruise of Canadian dysfunction flicks), and their problems have to do with drugs, family secrets, a bomb shelter, teen pregnancy, alcohol, even three-way sex with creepy "Kids in the Hall" alumni Mark McKinney playing creepy drifter twins. Each girl has her arc and Mary and Jim have their moment in the sun, with the surrounding wackiness ensuing against a period backdrop that conjures the ghost of The Ice Storm without knowing what to do with it. What offends most is the patina of smugness that seeps through every frame, the grand reveal in Smith's lesson about the ways of the world actually emerging from behind a wall in the basement. Jung and Poe, spinning in sympathy as another child of American Beauty emerges half-formed, somehow premature and several years past any possible relevance all the same. Originally published: April 27, 2005.