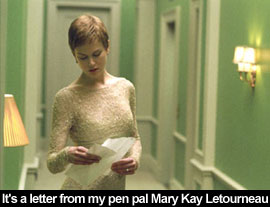 by Walter Chaw Second chances, erasing memories, manipulating perception--films this year like Eternal Sunshine of the Spotless Mind, Code 46, The Forgotten, The Manchurian Candidate, The Village, The Butterfly Effect, Before Sunset, 50 First Dates, The Final Cut, and so on suggest a collective desire to wash the slate clean, put on blinkers, and regain a little of that sweet, blithe ignorance of the day before yesterday. It's never as easy as all that, of course, since things have a tendency of coming back--and when an artifact of the past intrudes on the present it carries with it (along with all those memories of green) an aggressive payload of unexpected reactions. You can never go home again, nor can home ever return to you. Nevertheless, it tries to in a pair of films, two sophomore efforts, as it happens: Dylan Kidd's p.s. and Jonathan Glazer's Birth. Curiously, just the idea of the first film after a triumphant debut is tangled with the desire to recapture a little of the magic of the past.

So the rhetorical question of the hour is what's in the ether that has inspired this glut of films about mucking around in our memory banks and selectively editing out the things that scar us without considering that scars toughen us, too. Experience mars us and we are irredeemable to our past selves. Look at Laura Linney's Louise Harrington in p.s.: an admissions director for Columbia University's MFA program, she's reminded at the start of every semester that good art is a precious commodity and that time is a harsh mistress. Kidd does more with the premise, with Louise's recently-ended marriage to chronic philanderer Peter (Gabriel Byrne), than just the standard mid-life collegiate horse-and-pony show by offering her an F. Scott (Topher Grace) to salve her existential wounds. The spitting image of a teenage fling that ended in tragedy, F. Scott is all emetic charm like namesake author Fitzgerald's white-light anti-heroes. A few minutes after luring him back to her apartment, she straddles him beneath an impressionistic painting of the Madonna and child painted for her another lifetime ago by the first Scott.

The dialogue is whip-smart and the performances are up to the task. p.s. is an assured example of the Hal Hartley indie, no question, and there are moments ineffably tuned to the vibrations of the now. But where Kidd's debut Rodger Dodger used the banality of its situations to allow its characters to expand beyond them, here the structure becomes the reason and the ends. p.s. is a romantic comedy of the sort that Rodger Dodger debunks and disdains, winnowing away the meat of anthropological explanations for gender relationships and replacing it with a bit of sentimentality. There's a place for happy endings in star-crossed romances, but I wonder if that includes a depressed older woman entering into a relationship with the reincarnation of her dead high-school sweetheart. Despite the danger in this premise, the lingering impression one gets from p.s. is not discomfort, but rather a sort of middlebrow mainstream rom-com conventions-satisfied satisfaction.

More courageous by half and ballsy enough to actually follow through on all of p.s.'s thorny implications, Jonathan Glazer's Birth looks, sounds, and feels like a Carl Theodor Dreyer film--in particular Gertrud, though to some extent Ordet and Day of Wrath as well, and The Passion of Joan of Arc in Nicole Kidman's extraordinary stillness. Glazer and DP Harris Savides (fresh off his dual triumphs with Gus Van Sant, Gerry and Elephant) mine the portfolio of Dreyer's cinematographer Henning Bendtsen to create an astonishingly textured New York wintertime composed of the same sorts of shades of white and brown in which most modern viewers first discover Dreyer. Intriguingly, Glazer and Savides decided to shoot some of the action in takes nearly as long as an entire reel, which is anathema in this day of whip-cuts and anxious cameras. (A similar approach accounts for Gertrud's crash and burn in a 1964 aflame with the Nouvelle Vague.) Birth is extraordinarily patient with its story and, again like a Dreyer film, feels airless until the full implications of its psychosexual play begin to unfold.

Anna (Kidman), ten years removed from losing her husband, is on the verge of marrying lunk Joseph (Danny Huston), with whom she appears to harbour a grudging affection. Her vision of an idealized love that surpasses all consideration of earthly possibility (Gertrud again) has made her an emotional eunuch, an idea reflected in Kidman's performance as a woman cloistered away in her swank penthouse, hobbling around as if on stilts in her carefully tailored designer skirts. Enter Sean (Godsend's Cameron Bright, in his second reincarnate role in this year), a reserved ten-year-old with a long stare who has a lot of information regarding Anna's dead husband--who, in fact, claims to be him. There's nothing easy about Birth. From premise to execution, the film is intensely mature and deadly steady in its ability to hone in on the things that make us uncomfortable about love. (It's obsessive, for one, and its passion is a crucible for Anna.) One lengthy, uninterrupted close-up of Anna watching a Wagner opera (never the opera--the camera is trained on her face) is among the most beautiful contemplations of obsession and dementia in movies. Not inconsequential to note that the choice of Wagner (the second prelude to his Ring Cycle) is itself invested in the incidentals of moving along, sure, but also in the making of mythology and the distillation of the same into mediums of different shapes and capacities.

The opening scene is a rapturous Steadicam tracking shot presided over by the technology's inventor Garrett Brown, on set for just that one day. In its setting, in its grace following an anonymous jogger as he dies in a vaginal tunnel in New York's Central Park, it echoes the labyrinth shots that close Stanley Kubrick's The Shining. And the marriage of Kubrick and Dreyer, evoked in the projection of the characters' interiors onto the realities of this screen, is what most intoxicates about Birth. The central moment of the film, by way of notoriety, finds Sean getting into the tub with Anna. Raising the quick clamour of carefully bred outrage that Birth is paedophilic, the scene is as imperiously gravid as the moments leading up to it (and the moments that follow), and any dismissal of it glosses over Glazer's recurring birth imagery. The frightening idea is that Anna is marinating herself in the past and luxuriating in the possibility that Sean is exactly what he says he is. In its uncompromising nature, in its flawless execution, Birth is one of the best films of the year.

Birth is about madness, p.s. is about meet-cute. Birth has a grown woman falling in love with a pre-adolescent male who might be crazy, p.s. has a grown woman falling in love with a horny college freshman with a lot to gain by letting her get into his pants. Birth at its essence is about metaphysics, p.s. at its heart is about a mid-life crisis. There's something to be gained by comparing the two pictures and how they deal with what is basically the same premise, though it's possibly even more lucrative to ponder the implications of this core idea appealing to two disparate filmmakers at almost exactly the same time. The millennial zeitgeist is beginning to clarify itself: kids who need fathers, people who want shed of their memories of tragedy, nihilism in society, and hope nurtured in the hearth. While p.s. carries the ball for a while before it drops it, Birth crosses the finish line with brio; a scene that sees Anna on a liminal beach in a wedding dress, her back to the endless wasteland of the insensate sea as a Munchian scream creases her flawless, aquiline features, is a wondrous literal and thematic visualization of the last passage of Thomas Mann's Death in Venice. It's beautiful--as gorgeous as the full potential of heartache and despair can be when expressed by an artist of vision...and humanity. Originally published: October 29, 2004. 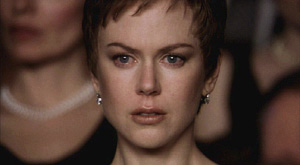 THE DVD
by Bill Chambers New Line presents Birth on DVD in a defiantly filmlike 1.82:1 anamorphic widescreen transfer. This is as canny an approximation of the celluloid mien as I've seen (while excluding specks of dust and general wear-and-tear, natch)--meaning, of course, that it will fail to meet the plastic standards to which most tech mavens hold anything brought into the digital realm nowadays. As I missed the window of opportunity to see Birth in a theatre, I found the organic quality of the image totally gratifying. The Dolby Digital 5.1 audio is equally transporting, with Alexandre Desplat's lush score and expansive arrangements entombing the viewer in the movie's sense of dread. That being said, one wonders why the talkfest Vera Drake merited a DTS track while the music- heavy, nay, dependent Birth did not. Trailers for Monster-in-Law, The Upside of Anger, Bright Young Things, Vera Drake, and The New World (Terrence Malick's latest) round out the regrettably sparse platter. Originally published: April 11, 2005.